December is a strange month for many reasons, not the least of which is celebration of an older man in a red suit who climbs down chimneys to leave gifts for “good” girls and boys. Not to mention the pitter patter of reindeer hooves on the roof. We had a problem with pigeons a few months ago. I don’t want to think about the presents Dasher, Dancer, and company leave.

Before there was Santa Claus, there lived a man named Nicholas who was known for his piety and generosity. Nicholas was the only child of wealthy, pious Christian parents who died ministering to the sick during an epidemic. Nicholas went to his uncle, the Bishop of Patara. Not surprisingly, he too joined the church and rose to the rank of Bishop of Myra in Asia Minor. Nicholas became known for his generosity, miracles, and overall goodness. Legends abound. 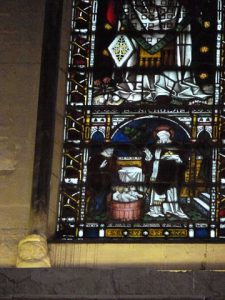 There was once a butcher who lured three children into his house, murdered them, and placed their remains in a barrel to cure for future sale as “ham.” Pretty grisly. Nicholas thwarted the butcher’s plan by prayer. The boys emerged from the barrel and returned to life. The illustration shows the children coming to life in the lower panel of the St. Nicholas Window at Rochester Cathedral.

Another time when famine raged, a ship waited at anchor with a cargo of wheat for the emperor. Nicholas gave the sailors the opportunity to share the wheat with famine victims. They declined, because the wheat would be weighed when they arrived at Constantinople. Nicholas promised all would be well. They believed him, off-loaded the wheat, and were much relieved when they reached Constantinople to learn that the weight of the load hadn’t changed. 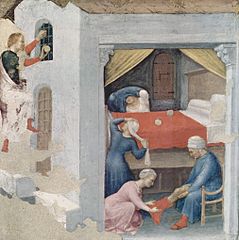 This last story is the one that made Nicholas memorable. There was a poor man with three daughters. The family was so poor, there was no money for the girls’ dowries. They would remain unmarried and be forced into prostitution to support themselves. And even if they didn’t take up the profession, everyone would think they had. Nicholas wanted to help them anonymously, so he went to the house by night.

Every night the girls hung their stockings by the fire to dry. Nicholas threw a bag of gold through the window. It landed in the eldest girl’s sock. The same thing happened the next two nights. Imagine the surprise and joy experienced in the humble house. The girls could marry after all.

Nicholas died in Myra on December 6, 343 and was buried in the cathedral church. A relic called manna appeared in his crypt. This was a liquid substance with miraculous powers. The site quickly became a popular pilgrimage destination. 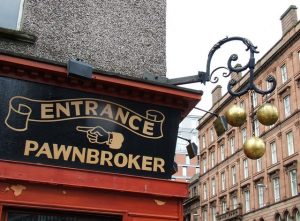 Nicholas became a recognized saint long before the Catholic Church developed rules for canonization, and is known as the patron saint of an eclectic mixture of sailors, merchants, archers, repentant thieves, children, brewers, pawnbrokers, and students. Pawnbrokers commemorate the relationship by illustrating their shop signs with three golden balls.

Iconography most often depicts the three dowries by showing St. Nicholas holding three purses, three coins, or three balls of gold. Sometimes the latter are viewed as oranges which leads to another story. Oranges became popular stocking stuffers, usually in the toe of the sock to anchor the other gifts. Since winter fruit came from Spain, many believers thought Nicholas lived in Spain and brought the oranges to give away on his seasonal visits.

In 1087 sailors from the Italian town of Bari took what they identified as Nicholas’ bones. The town built a crypt within the Basilica di San Nicola, and became the new pilgrimage site. During the 1950s scientists were allowed to photograph and measure the crypt’s contents. The results came out in 2005. Apparently Nicholas was 5 feet 6 inches tall and had a broken nose.

But wait. Were those really St. Nicholas’ remains? Perhaps not. An intact tomb exists under St. Nicholas Church in the Demre district of Turkey’s province of Antalya. Demre exists on on the ruins of Myra where St. Nicholas died. A study of documents revealed notes indicating the bones taken to Bari didn’t belong to St. Nicholas. Time will tell. Further excavation goes slowly due to stones decorated with motifs that have to be removed before the crypt can be reached.

Has the original Santa Clause been found in Turkey? BBC News. October 4, 2017.