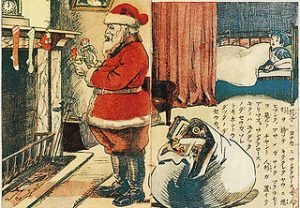 Last week’s blog was about St. Nicholas and his miraculous good deeds. This week is about how St. Nicholas turned into Santa Claus, a figure known around the world.

The new and improved St. Nicholas got his start in the Middle Ages, that strange point in history between ancient and modern Europe. Princess Theophano of Constantinople gave her new husband Otto II of Germany an icon of St. Nicholas on their wedding day in 972. Nicholas legends began to spread the idea of doing good for those less fortunate.

A group of French nuns decided to bring anonymous gifts of food, clothing, and occasionally money to needy families. These nuns must not have been confined to the convent. They bestowed their largesse so it would be found on December 6, St. Nicholas Day. If recipients asked the source of these gifts, the nuns reportedly replied, “It must have been St. Nicholas.”

Everyone soon made St. Nicholas a favorite saint. But in 1517 – Disaster. Martin Luther nailed his 95 Thesis on the church door in Wittenberg and ignited the Protestant Reformation with its wars over religious affiliation. Protestant areas banned all saints and other customs from the Catholic Church. 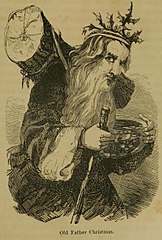 People didn’t want to ban St. Nicholas, so they changed his name and purpose. In England, Nicholas became Father Christmas who still delivers presents today. In France he morphed into Perl Noel. German-speaking countries had the Christkind, a golden-haired baby with wings. Christkind translates as Christ-Child.

In the New World Christkind became Kris Kringal. Dutch settlers introduced Sinterklass. If you sound it out, it sounds like St. Nicholas. It also sounds like Santa Claus. Thus was Santa Claus born. But he wasn’t a big deal until the nineteenth century.

“A Visit from St. Nicholas” by Clement Clarke Moore appeared in the Troy Sentinel on December 23, 1823. Santa, now a fully adult elf with eight reindeer, a sleigh, and a weight challenge, flew through the night bestowing gifts. 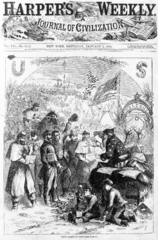 In 1863, during the American Civil War, Harper’s Weekly published the first illustration of Santa Claus. He wore an American flag. For the next twenty years Thomas Nast refined Santa’s image. By 1881, Santa had a red belly, smoked a pipe, and held arm full of toys. 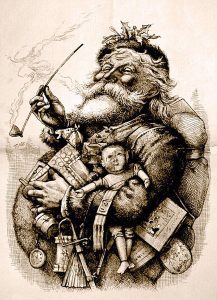 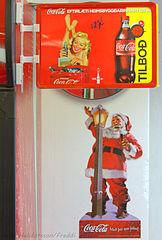 Coca-Cola began using Santa Claus in their advertisements during the 1920s. In 1931 Haddon Sundblom drew the Santa we most recognize today, replacing his pipe with a glass of Coca-Cola.

I hope you’ve enjoyed this short series on St. Nicholas/Santa Claus, and can’t help ending this one in the words of Moore’s poem:

HAPPY CHRISTMAS TO ALL

AND TO ALL, A GOOD NIGHT.

The Holidays Are Coming by Helga Haldorsson. Creative Commons Attribution.

The Night Before Christmas.