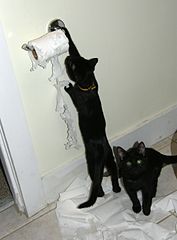 As faithful readers know, I like to look up anniversaries of events that changed modern life. So imagine my delight when I discovered December 22, 1891 is the date Seth Wheeler received the patent for his toilet paper roll. I’m informing you now because life gets hectic that close to Christmas and you might want to celebrate early. 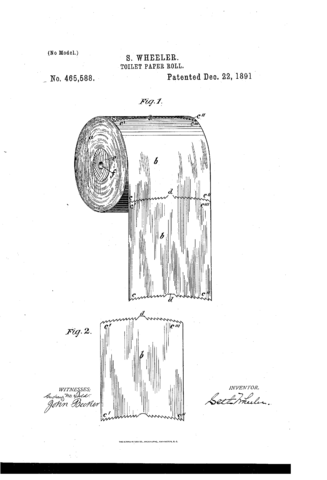 This is a debate of some importance, so you can imagine the excitement when illustrations of Wheeler’s patent drawing became public. Clearly, Wheeler meant the paper to go over the holder.

The historian in me engaged, as I delved deeper into toilet paper history. It appears Joseph C. Gayetty invented the first patented toilet paper in 1857. Gayetty’s Medicated Paper sold in flat sheets. It’s generally thought advertising didn’t enter public consciousness until the 1920s, but Gayetty’s ad demonstrates him as a man ahead of his time. 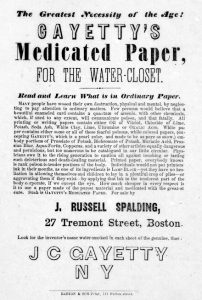 Gayetty marketed his Medicated Paper for the Water Closet as the Greatest Necessity of the Age. “Printing paper, everybody knows, is rank poison to tender portions of the body.” In the long run, “how much cheaper in every respect is it to use a paper made of the purist material and medicated with the greatest care?” Product assurance guaranteed by a water mark on every sheet. Gayetty’s paper was sold until the 1920s. 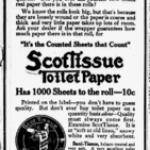 Wheeler was the first to to patent toilet paper on a roll, but he may not have been the first inventor. Scott Paper Company developed it in 1880 and began selling the product under their own brand in 1896. An advert from 1915 warns consumers about Toilet Paper Sales. The customer sees an announcement of eight or ten rolls of toilet paper for a quarter. “Did you ever ask yourself how much real paper there is in these rolls?” . . . Scott Tissue Toilet Paper has 1000 sheets to the roll for ten cents and is “soft as old linens,” snowy white, and very absorbent.” 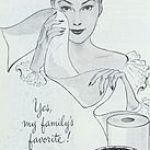 Charmin uses animated bears in their popular ads which also demonstrate the ongoing debate about how to put toilet paper in the holder. In the ad from 2011, the paper is threaded under the roll.

The important thing is to find the method that works best for the household. Cats get into the toilet paper no matter which method you choose.

The Greatest Necessity of the Age Advertisement, 1859. Public Domain.

2 thoughts on “Toilet Paper — Over, Under, or Just Right”