Meet the antiquated shredding machine my co-shredder and I called “Frieda.” We were doing a community service project. Neither of us was good at construction work, but we were quite the shredding team. And there were boxes and boxes of documents that Frieda wanted to, shall we say, consume.

[Sidebar: The name Frieda comes from Old Norse and means beautiful beloved. Which is not exactly how we felt about the machine. But boy was she a trooper. Wads of paper, plastic badges, staples, the occasional paper clip – she ate it all.]

We left wondering:
Why did we think of the shredding machine as female?
Why did we name her Frieda?

“Female” Machines & The Illusion of Control

One of the earliest references to feminine machines is a fourteenth century siege engine in the shape of a crossbow that went by the name Domina Gunilda, or Lady Gunild. Humans like to anthropomorphize machines. It makes them less threatening and infers the machine is under our control like a servant. At the same time humans worry machines will take over and destroy us. And thus much of science fiction was born. 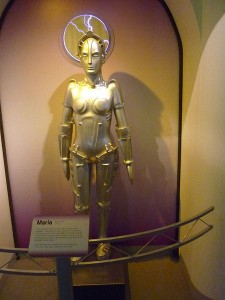 Not content with naming machines, ships, and weapons modern humans also name robots. One of the earliest science fiction movies was The Metropolis in 1927 which was restored and re-released in 2010. Filmed in Weimar Germany, the film looked at the inhumanity of machines and the dehumanizing effects they had on mankind.

One of the primary characters in Metropolis is Maria, a robotic gynoid created by a scientist who, if not completely mad, is certainly unusual. Rotwang created Maria in the image of his lost love. Her transformation from human to robot is considered one of the most powerful in the genre, and gained Maria a 2006 induction into the Robot Hall of Fame. Curious? The transformation scene is here.

Fast Forward to 2015 and Ex Machina

Ava is the creation of Nathan Bateman who is better looking than Rotwang but no less diabolical. How human is Ava? Is she self-aware? Could “she” have been a “he”? That’s the other thing about these feminine robots. The inventors are male. The feminine machine isn’t just about being a stand-in for the days of house servants. It’s also about powerful males “creating” subservient female entities.

In 1927 women were new voters. They were independent and out in public. They held jobs. In 2015 women run for president. The genre of out of control female robots gives the appearance of a cultural backlash. If real women don’t fit the bill, men may seek to provide a substitute.

In case you missed Ex Machina, I offer you one of the trailers.

Which brings us back to Frieda

I’d like to close with a less than profound conclusion about why my co-shredder and I named the shredding machine Frieda. It was because after spending four hours in a dusty room feeding paper into the machine’s insistent teeth, we felt a sense of comraderie. We also found the entire situation hilarious. Perhaps we’d inhaled too much paper dust?

Charlie Jane Anders. “From Metropolis to Ex Machina: Why Are So Many Robots Female?” Gizmodo.com. April 21, 2015.

4 thoughts on “Maria, Ava, and Frieda the Shredder”