The “We Can Do It” poster was first produced in 1943 by Westinghouse Electric to boost worker morale. It was part of a series of posters displayed by the company. The phrase “we can do it”  wasn’t about female war workers in particular. It meant Westinghouse employees could war reach production goals by working together. The women’s movement embraced the poster during the 1980s, interpreting the slogan as “women can do it.”

Women have made many strides in education, economic participation, and career success, but, according to the Census Bureau, despite their qualifications, women still haven’t achieved wage parity. How long before women receive equal pay instead of 78 cents on the dollar?

Tuesday, March 8th marks International Women’s Day, a perfect time to reflect on the changed status of American women in the workplace. Originally the name was more political. In 1909 the Socialist Party of America came up with International Working Women’s Day to honor the International Ladies’ Garment Union. On March 8, 1908, 15,000 women garment workers rallied at Union Square to demand economic and political rights. To a certain extent, they achieved their goal. It was a proud moment for labor.

In 1910 the meeting of the International Women’s Conference in Copenhagen passed a motion to make Women’s Day truly international. 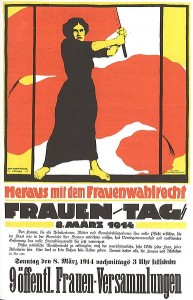 This 1914 German poster demands: Give Us Women’s Suffrage. Until now, prejudice and reactionary attitudes have denied full civic rights to women, who as workers, mothers, and citizens wholly fulfill their duty, who must pay their taxes to the state as well as the municipality. Fighting for this natural human right must be the firm, unwavering intention of every woman, every female worker. In this, no pause for rest, no respite is allowed. Come all, you women and girls, to the 9th public women’s assembly on Sunday, March 8, 1914, at 3pm. 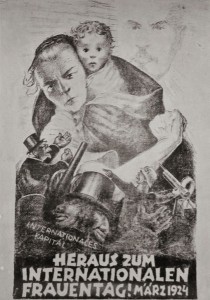 By 1924 the angry German socialist woman with her red flag was replaced by a strong woman who held her child on her left shoulder while fending off international capitalists with her strong right arm.

The socialist emphasis continued until 1975 when the General Assembly of the United Nations adopted a resolution proclaiming the United Nations Day for Women’s Rights and International Peace to be observed by member states on any day of the year.

Has International Women’s Day made a difference? Perhaps.

In the United States women vote, run for, and are elected to political office. Women graduate from college at a faster pace than men. They have more bachelor’s and graduate degrees. Women are the equal if not the primary breadwinner in four out of ten families.

But statistically women earn 78 cents for every dollar earned by men. 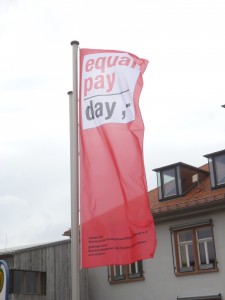 We now have a new commemorative day: Equal Pay Day

Equal Pay Day is the day when women earn as much as men in a year. Last year Equal Pay Day was April 14, 2015. So, for women to earn an annual income equivalent to male income, their year required 60 extra days.

Like all statistics, this figure can be massaged. According to the Washington Post fact checker, if one looks at weekly wages, the gap is reduced from a 22 cent differential to an 18 cent gap. And if hourly wages are considered, the gap falls further to 13 cents.

Pundits suggest this is not due to discrimination, but life choices. Since the 1950s the most common job for women has been secretary or its equivalent title, while men have been drivers, sales workers, and investment managers. Women work part time. Women choose jobs with less pay and more flexible hours. Women leave the workforce to raise children.

But the theory doesn’t hold up. Women are 70 per cent of elementary and middle school teachers, yet men in the same profession earn more. Men’s weekly median wage is $1096, compred to women’s $956 which works out to 87 cents on the dollar. Among full time lawyers, women earn 83 cents.

Margie Warrell suggests everyone must take personal responsibility to close the gap. Women need to be aware of their own value. She cites a study Cornell University did on beginning salaries for MBA graduates of Carnegie Mellon. Male graduates earned $4000 more annually than females. However 57 percent of men asked for higher salaries. Only 7 percent of women did the same.

This year the theme for International Women’s Day is #PledgeForParity. This is a pledge made by every individual to take a concrete step towards achieving gender parity more quickly. Suggestions include mentoring women and girls to achieve their ambitions, demanding gender balance in leadership, and respect for personal differences.

Last year the World Economic Forum estimated that the pay gap between men and women might not even out before 2133 and it could take as long as 2159.

That’s a long time to wait for Parity.

We cannot succeed when half of us are held back.

Featured Image: “We Can Do It” poster for Westinghouse. Public Domain. Wikimedia Commons.