The image of Father Time handing his hourglass and sickle over to Young New Year is long embedded in western culture. In this postcard from 1910, Father Time looks happy and energetic as he advises his protégé on the year ahead.

A fresh new year offers everyone the endless possibilities of positive change and new beginnings. A time to set goals, generally referred to as Resolutions. Forty-five percent of Americans made New Year Resolutions in 2015; about 8 percent succeeded. Perhaps the others resolved to try again this year. 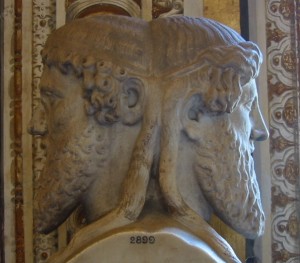 No matter. The point is that each year we can review the year completed and decide what to hope for from the new beginning before us. We can thank the Roman god Janus who presided over new beginnings as well as endings for our annual opportunity to start fresh. In ancient Rome, Janus was found in doorways. Because every door looked in two directions, Janus needed to see both forward and backward. He is, in that sense, two-faced.

Initially one face was unshaven, the other bearded – not unlike the New Year Baby and Father Time.

Romans believed it was important to follow proper procedure for new beginnings. Ever wondered why the bridegroom carried his bride over the threshold? One reason was to avoid the bad luck that would occur if she tripped or fell as she entered her new home.

It was especially important to please Janus at the beginning of a new year so that prosperity would flow. People decorated their houses with evergreens, made offerings, dressed festively and extended best wishes and the good gifts of dates and figs to everyone they met. Dates and figs predicted sweet things to come. The custom of New Year’s gifts persisted into the Middle Ages.

Do you think New Year’s Resolutions are a descendent of those early efforts to please Janus? What have you resolved to do in 2016? I resolved to be on my yoga mat five days a week, complete the research for my next book, and keep letting people know that Rama’s Labyrinth is available on Amazon.

I wish you good health, abundant life, and joy in every day of this new year.