For generations sugar production dominated the political, economic, and cultural profile of Hawai`i. At the end of this year the Hawaiian Commercial & Sugar Company, better known as C & H, will process its last crop and lay off its last worker. Parent company Alexander & Baldwin will divide 36,000 acres on Maui into smaller farms with diversified uses and Maui residents will be able to breathe more freely without the annual cane fires that precede harvests. The 144th and last harvest season begins March 2, 2016.

The closure of C & H shouldn’t be a surprise. In 2015 Hawai`i was the third largest sugar producer in the U.S. with 1,422 tons. Florida, the largest American producer, harvested 15,278 tons. Parent company Alexander & Baldwin said it expects to lose $30 million dollars in fiscal year 2015.

If you, like me, associated cane sugar with Hawai`i, one of the reasons could be C & H’s very successful advertising campaign. 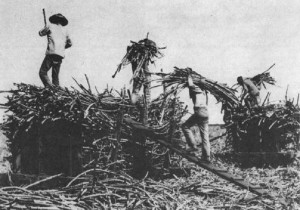 The work was excruciating. Ronald Takaki in Pau Hana, his book about life on the sugar plantations, quoted one worker’s determination:

The only reason I’m doing
This tough and painful holehole work
Is for the sake of my wife and children
Who live back home.

The history of the plantation era is not romantic. But it is an integral part of what Hawai`i is today. Strange to remember that Kōloa plantation on Kaua`i was the first commercial sugar plantation in the then Kingdom of Hawai`i. In 1980 there were fourteen sugar plantations with another 550 independent sugar growers on 220,000 acres of land. They produced about a million tons of raw sugar annually. In 2017 after 182 years of commercial sugar production, the industry will be gone.

Olivia Lowenberg. “Why Sugar, Once a Big Business in Hawaii, is Now Disappearing.” The Christian Science Monitor. Jan. 8. 2016. Here.