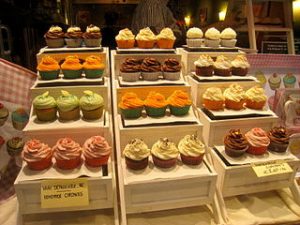 Life is stressful these days.
It must be time for a cupcake break.

Fun, exuberant little cakes, the cup cake is almost sincere in its potential for simplicity. There’s automatic portion control. The little cakes bake more quickly than regular cakes which makes them energy efficient. Serving cupcakes, especially with their paper wrappers, is less messy than slicing the traditional cake. Eating a cupcake could be considered as virtuous as it is indulgent.

Nobody knows who invented the cupcake, but the first known recipe for “light cake to bake in small cups” is in the 1796 American Cookery by Eliza Leslie.

*Emptins was a liquid form of leavening made from potatoes or hops.

Batter for small cakes was poured into individual pottery cups, ramekins or molds. 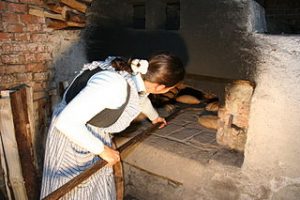 The name cupcake was first given to any small cake about the size of a tea cup. The smaller size was an advantage when people baked in hearth ovens. It took longer to bake a cake which often burned. The smaller cup cakes baked quickly and could be fitted around other items in the oven.

The term cup cake also applied to a cake made from measured cups rather than weighed ingredients. These were also called Number Cakes or 1234 Cakes, because their measured numbers made them easy to remember.

Variations of cup cakes remained popular in home kitchens throughout the nineteenth century, but they took off in the mass market in 1919 when Hostess introduced its snack cake. Doc Rice started working for Hostess in 1938. It was his job to dump the baked cakes onto a table. Presumably using hot pads. Anyway, in 1947 he got the job of updating the brand. Three years later Hostess cupcakes became what many school children ate. A white squiggly line across the chocolate frosting identified the brand. Rice added creme filling.

As of 2011 Hostess cupcakes sold over 600 million snack cakes annually. 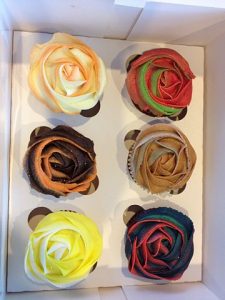 In 2000 Carrie Bradshaw announced her crush on Aiden in Sex and the City while eating a cupcake from Magnolia Bakery. Eating a cupcake became a sensuous experience. The trend took off.

Alas both Sex and the City and expensive trendy cupcakes have moved out of public view. But cupcakes are still a delightful way to celebrate as the these Beached-Themed Bridal Shower cupcakes demonstrate. 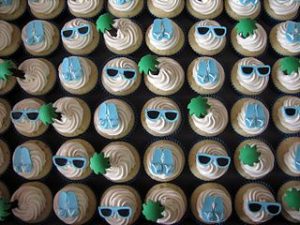 Melissa. The History of Cupcakes. Best Friends for Frosting.

Sara Elliot. Who Invented the Cupcake? How Stuff Works Lifestyle.