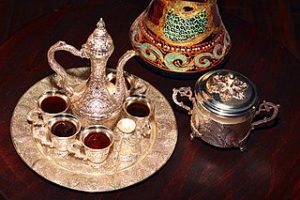 Considering our craze for gourmet coffee, you probably know coffee is more than a flavored beverage made by adding ground, roasted coffee beans to boiling water. Coffee is part of western culture and has been since Pasqua Rosee opened The Turks Head in 1652.

Rosee, originally from Smyrna in the Ottoman Empire, advertised coffee’s many virtues and its exclusivity. The coffee berry, he said, only grew on little trees in the Deserts of Arabia.

According to Rosee, the Turks drank coffee at meals and other times, which explained why they didn’t suffer from “stone,” dropsy, or scurvy. Coffee also kept their skin clear and white.

In addition, this magical drink was good for digestion, rheumatism, and consumption. It prevented “mis-carrying in child-bearing women.” Most importantly, coffee prevented drowsiness and made one fit for business.

Thus the connection between coffee and work began.

Rosee advised fasting an hour before and after consuming coffee which should be drunk as hot as possible, preferably among friends at The Turks Head, located in the financial district near the Royal Exchange. In short order, Rosee sold 600 dishes of coffee a day at a penny each. One purchase enabled a customer to spend the day in the The Turks Head Coffeehouse, a place of warmth, conviviality, and male companionship.

Competition came swiftly. In 1662 the Great Turk Coffee House opened serving coffee, tea, tobacco, chocolate and a range of sherbets which were said to be made in Turkey from lemons, roses, and violets.* By the following year, there were over 83 coffee houses in London. 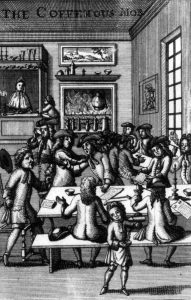 The coffee itself was less than desirable. Consumers described it variously as “a syrup of soot and the essence of old shoes,” Other comparisons were with oil, ink, soot, mud, and damp. Nevertheless, the exotic beverage brought new possibilities. In the coffeehouse, everyone was equal, provided each customer purchased a dish of coffee. And the bad taste only proved coffee’s virtuous qualities.

One traveler observed that coffeehouses “are extremely convenient. You have all manner of news there; you have a good Fire, which you may sit by as long as you please; you have a Dish of Coffee; you meet your Friends for the transaction of Business, and all for a penny, if you don’t care to spend more.” ** 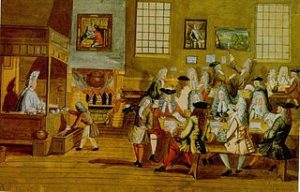 Men selected the coffeehouse that matched their professional inclinations. Edward Lloyd’s coffeehouse in the City of London was so popular with shippers, captains, and maritime insurers that Lloyd posted ships’ arrivals and departures at the London docks. Lloyd’s Coffeehouse was the place one obtained marine insurance. When the underwriters decided to form an official company in 1774, they called it Lloyds of London.

For seventy years, the London Stock Exchange operated out of Jonathon’s and Garraway’s coffee houses. Even ordinary businessmen and doctors kept office hours at their coffee house.

Coffeehouses weren’t without their detractors. Charles II saw them as incubators for political plots, but they were too popular to close down. 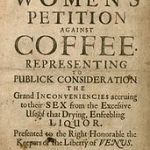 Of more interest is the “Women’s Petition Against Coffee” published in 1674. I have my doubts as to the author and suspect some wags at a coffeehouse came up with the idea. Whoever “Anonymous” was, s/he wrote the pamphlet as the “Humble Petitions and Address of Several Thousands of Buxome Good-Women, Languishing in Extremity of Want.”

The cause of their discomfort “we can Attribute to nothing more than the Excessive use of that Newfangled, Abominable, Heathenish Liquor called COFFEE, which Riffling Nature of her Choicest Treasures, and Drying up the Radical Moisture, has so Eunucht our Husbands, and Cripple our more kind Gallants, that they are become as Impotent as Age, and as unfruitful as those Desarts whence that unhappy Berry is said to be brought.”

And as if that wasn’t enough cause for complaint, “Men by frequenting these Stygian Tap-houses will usurp on our Prerogative of tattling, and soon learn to exceed us in Talkativeness: a Quality wherein our Sex has ever Claimed preheminence: For here like so many Frogs in a puddle, they sup muddy water, and murmur insignificant notes till half a dozen of them out-babble an equal number of us at a Gossipping, talking all at once in Confusion.”

The women demanded “that our Just Rights may be restored, and all the Ancient Priviledges of our Sex preserved inviolable; That our Husbands may give us some other Testimonial of their being Men, besides their Beards and wearing of empty Pantaloons.” 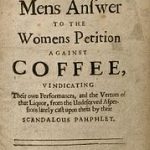 There was, of course, a reply in which the men asked “But why must innocent COFFEE be the object of your Spleen?”

And don’t forget, the unknown author wrote, unlike adulterated wine and muddy ale, “Coffee Collects and settles the Spirits, makes the erection more Vigorous, the Ejaculation more full, adds a 4-10 spiritualescency to the Sperme, and renders it more firm and suitable to the Gusto of the womb, and proportionate to the ardours and expectation too, of the female
Paramour.”

Methinks both pamphlets smack of silly coffeehouse conversations. Coffee preparation has improved over the past three hundred or so years, and coffee shops aren’t male enclaves. But coffee house culture as a place to relax, meet friends, and catch up on the news continues.

Matthew Green. “The Lost World of the London Coffeehouse.” The Public Domain Review.

3 thoughts on “Coffee: Stimulant or Hindrance?”