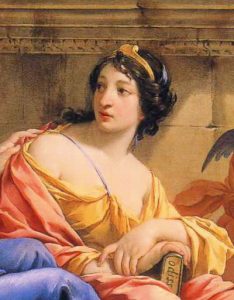 Calliope, Muse of Eloquence and Epic Poetry just highjacked my blog for the second time. Last time she led me to scandal when I wanted to write about washing machines. This morning I expected to write about the social ritual known as “Morning Coffee.”

“No, No,” Calliope said wagging her finger and pointing at my desk. “That’s much too dull. First you must write about writers and coffee.” 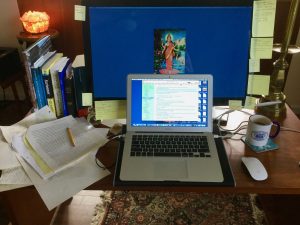 She gazed at the sprawl that is my desk while writing, shook her head, and disappeared. I suppose she has a point. Reference books, notes, and pencils surround my computer. And next to the mouse, a mug of coffee growing cold.

Coffee has a long linkage with creativity. (So does alcohol, but we won’t go there today.)

In 2013 Michael Koh referenced a study by the National Writer’s Association that concluded 110 per cent of poets and authors “have taken or take this certain easy-to-obtain mind-enhancing substance to complete their work or get through the day.”

Gustave Flaubert, author of Madame Bovary, claimed “Coffee: Induces wit. . . take it without sugar—very swank: gives the impression you have lived in the East.”

I ran across one reference that reported Ludwig van Beethoven, composer of Ode to Joy, breakfasted on coffee he made himself at precisely sixty beans per cup. I hope it was a large cup.

J. S. Bach, another famed composer wrote, “Without my morning coffee I’m just like a dried up piece of roast goat.” This led me to wonder how much roasted goat Bach consumed. 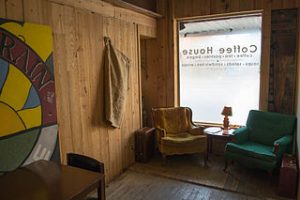 Lest you think creative coffee consumption has waned since the nineteenth century, Michael Koh reported that Americans consume an average of three cups of coffee daily, with writers doing their share to keep the numbers up by consuming four to five cups of coffee a day.

Honore Balzac, a prodigious French writer, explained the phenominon. “Coffee glides into one’s stomach and sets all of one’s mental processes in motion. One’s ideas advance in column of route like battalions of the Grande Armée. Memories come up at the double, bearing the standards which will lead the troops into battle. The light cavalry deploys at the gallop. The artillery of logic thunders along with its supply wagons and shells. Brilliant notions join in the combat as sharpshooters. The characters don their costumes, the paper is covered with ink, the battle has started, and ends with an outpouring of black fluid like a real battlefield enveloped in swaths of black smoke from the expended gunpowder. Were it not for coffee one could not write, which is to say one could not live.”

Which leads me to believe Albert Camus should choose coffee over death, because as an Unknown source wrote:

“Life’s too short to drink crappy coffee and cry over boys who don’t care.”

Photo of Writing Desk by Author.

Other Illustrations from Wikimedia Commons.

Calliope, extracted from The Muses Urania and Calliope by Simon Vouet. Public Domain.

Inside a Coffee House in Sheridan, OR by Visitor7. Creative Commons Attribution.

2 thoughts on ““Should I Kill Myself, or Have a Cup of Coffee?” – Albert Camus”