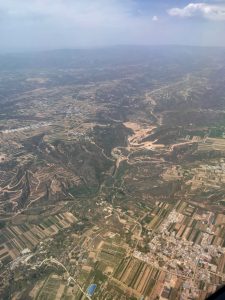 Xi’an, the capital of Shaanxi Province, nestles between the Qinling Mountains to the south and the Wei River in the north. Even from the air, the area looks prosperous. Under the Tang Dynasty (618-907) Xi`an, then known as Chang-an, was one of the biggest international cities of its time, noted for its cosmopolitan population. 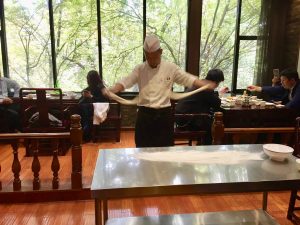 The first stop after our arrival was lunch at Haishige where we saw a noodle-making demonstration. The ‘Bang-Bang’ Noodle, also called the longevity noodle, is known for its thickness and length. The noodles are hand-pulled into one long noodle as a sign of good fortune. To cut or break the noodle is considered very bad luck. The name Bang-Bang is connected to the process of making the noodle as shown in this video I took. [By the way, this was the first time I used the video feature on my iPhone. About time, don’t you think?]

There is a saying in Xi’an that every man must be able to make his own noodles. If that’s the case, this young man should do very well. 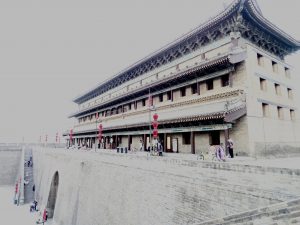 Xi’an sat at the terminus of the Silk Road that stretched across Central Asia into Rome. Merchants arrived at the Western Gate of the city walls – still standing after all these years. In the modern age, many cities took down their walls to expand the city and roadways, but Xi’an was too poor. Now the only complete set of city walls left in China is at Xi’an. 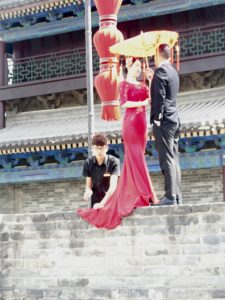 Today the walls welcome tourists from China and abroad. They’re also a popular backdrop to wedding photos. These are often taken a year before the actual wedding. The brides wear red, an auspicious color of happiness and good luck.

Under the Tang and subsequent dynasties, foreigners weren’t allowed to reside inside the city. Diplomats and merchants, many of whom were Muslim, married and raised their families outside the walls. Today Xi’an has the largest Muslim population in China, descendants of the early merchants. 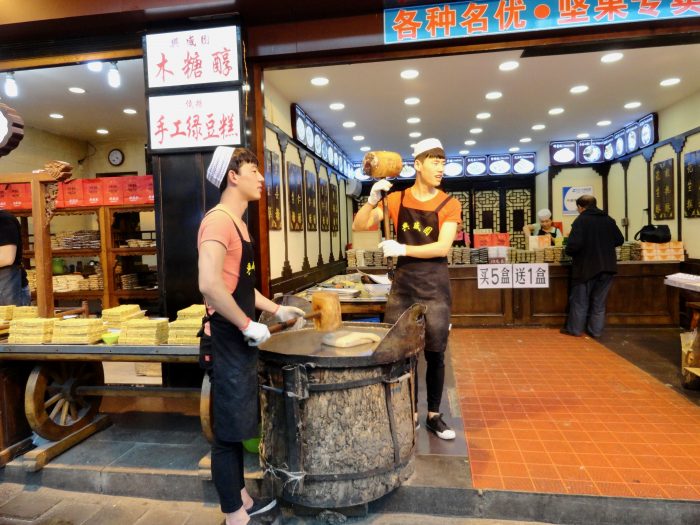 Beiyuanmen Muslim Market welcomes tourists and residents to its many shops, all owned by Muslims. 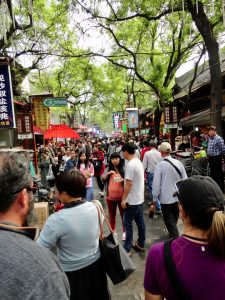 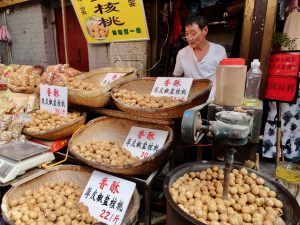 Xi’an is particularly noted for its walnuts. These were introduced to China during the Western Han Dynasty. The nut grown in nearby Shangluo is famous for its size, thin shell, and loose kernel. 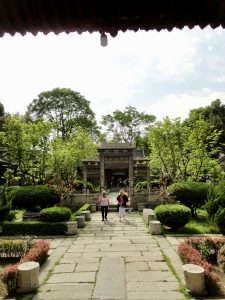 The Great Mosque of Xi’an also has its roots in the Silk Road. Founded in 742, the mosque combines Islamic and Chinese elements. The complex is aligned on an east-west axis facing Mecca. Most buildings were rebuilt in the 17th and 18th centuries.

The mosque is laid out like a traditional Chinese Temple with five successive courtyards of pavilions and pagodas on the long narrow site. The entire complex covers about 1.5 acres. 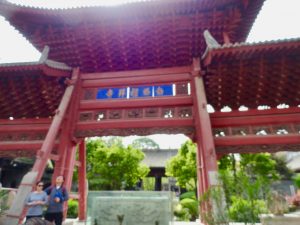 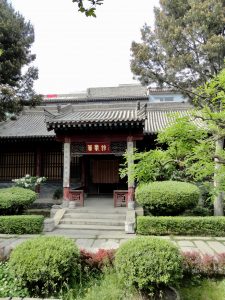 The prayer hall is in the fourth courtyard and can accommodate over 1,000 people.