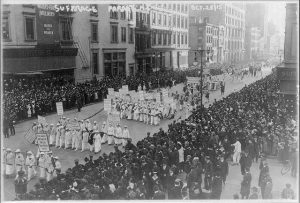 The fight for women’s equality in the United States began at the Seneca Falls Convention in 1848. Advocates worked tirelessly circulating petitions, holding rallies and conventions, and marching in public parades. In this parade, 20,000 women marched in New York City, many of them wearing white as a symbol of purity. Supporters hoped women would clean up politics and government. 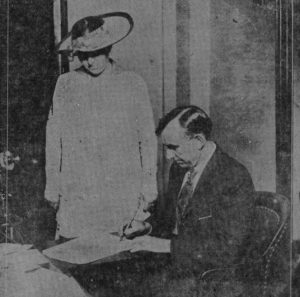 The amendment went to the states for ratification in 1919. Supporters fanned out across the country in a state-by-state struggle. Tennessee completed the ratification process on August 18, 1920. On August 26, 1920 the Nineteenth Amendment became law. Women could vote, but not much changed.

In 1960 Betty Friedan published The Feminine Mystique, setting off what many call feminism’s second wave. This time women pushed for full equality in all areas of life. In 1966 leading feminists founded the National Organization for Women. 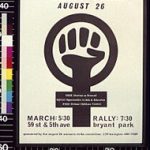 Four years later, 50,000 women marched in the Women’s Strike for Peace and Equality, the first major women’s march since the suffragettes. The march was a symbolic gesture and work stoppage meant to draw attention to the unequal distribution of domestic labor, and to bring three goals into focus: free abortion on demand, equal opportunity in employment and education, and childcare centers open 24/7. Title IX, requiring equal educational opportunity, passed in 1972.

Feminists also pressed for the Equal Rights Amendment to the Constitution. First promoted by Alice Paul and the National Women’s Party in 1923, Representative Bella Abzug introduced the bill in 1971. It passed both the House and Senate, and went to the states for ratification. [Ultimately, the amendment failed to achieve ratification by three-fourths of the states.]

In 1971 Representative Abzug also introduced a bill to recognize August 26 of each year as WOMEN’S EQUALITY DAY. The bill passed as a Joint Resolution of Congress.

BELLA SAVITZKY ABZUG, also known as Battling Bella was a practical leader in the cause of women’s rights. She joined the New York Bar in 1945, not a time when professional women were welcome. Abzug participated in the civil rights and anti-war movements as well as the women’s movement. She served in the House of Representatives from 1971 to 1976. Her campaign slogan: “This woman’s place is in the House – the House of Representatives.” Bella’s hats became famous. When asked why she persisted in wearing them, Bella said that when she entered the work force, “Working women wore hats. It was the only way they would take you seriously.”

“The test for whether or not you can hold a job should not be the arrangement of your chromosomes.”

“I prefer the word ‘homemaker,’ because ‘housewife’ always implies that there may be a wife someplace else.”

“We are coming down from our pedestal and up from the laundry room.”