Although gardening takes place all year round, it comes to mind most readily in the spring. April is a good month for planting trees, shrubs, and annual flowering bulbs that bloom in summer. These might include dahlias and gladiolas. It’s also time to plant seeds for marigolds and zinnias. If you go to your local garden center, you’ll find all sorts of items to get your garden started, including plants, pots, seeds, soil . . . The list is exhausting. 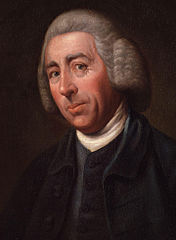 But did you ever pause to wonder how this spring time ritual started? In many ways the man who started our desire for our own plot of grass and flowers was known as “Capability” Brown (1716-1783). The name “Capability” seems no more unusual than his given name of Lancelot Brown. He acquired the nickname because as he assessed large landholdings for their landscaping potential, he often informed his client that the land had capability for improvement.

Capability was the fifth child of Sir William Loraine’s land agent. His mother was in service at the main house. He worked as the head gardener’s apprentice in the kitchen gardens until he was twenty-three years old. He then joined Lord Cobham’s gardening staff at Stowe as an under-gardener, working under the direction of William Kent, founder of the English landscape garden. Tastes were changing. Formal gardens like those at Versailles had fallen into disrepair. Walls were missing. The strict geometric patterns had become a bit sloppy.

Capability’s style clicked. Three years after joining Lord Cobham’s staff, Capability was head gardener. He introduced a new approach to the land. No longer was the focus on dominating nature. Brown saw nature as a source of inspiration. His gardens were both appealing and practical. Common features included serpentine water features stocked with fish and inviting for boating. Trees at the outer edges were both aesthetic and a source of timber. Lord Cobham’s friends hired Brown to design their own landscapes.

In 1751 Brown got his first big commission. He redesigned Croome Court, a project that included remodeling the house, relocating the church, and draining marshy ground so the water could be utilized as a lake.

Brown saw his work like a sentence: “there I make a comma; and there, where a more decided turn is proper, I make a colon: at another part, a parenthesis—now a full stop; and then I begin another subject.” Brown shaped the landscape to his vision. Small brooks were damned to become lakes. Valleys were dug; hills, mounded. Trees placed at appropriate intervals.

Visitors to an estate didn’t go directly from the gate to the house. They took a circuitous drive through wooded areas, open fields, lakes, and controlled wilderness. Brown also gave the landscape a theatrical touch. As the carriage rolled on its way, passengers saw a glimpse of a folly, bridge, or other feature

Among Brown’s commissions are the gardens at Chatsworth House, Blenheim Palace, and Highclere Castle – known to many Americans as the site of Downton Abbey.

At the height of his career in the 1760s Brown earned about £6000 a year (£753,000—about a million US dollars—in 2016). His ideas tricked down to smaller landowners. Everyone wanted their house surrounded by undulated green lawns with artistic clumps of trees.

Landscape fashions have changed over the centuries, but the perfect green lawn remains a goal for many gardeners.

If you have about eight minutes to spare, this aerial video of Blenheim Palace’s 2,000 acres demonstrates Capability Brown’s landscape vision of a perfectly designed natural garden.

“How to Spot a Capability Brown Landscape at 100 yards.” The Telegraph.

Eleanor Doughty. “Everything you need to know about Capability Brown.” The Telegraph. Aug. 30, 2016.