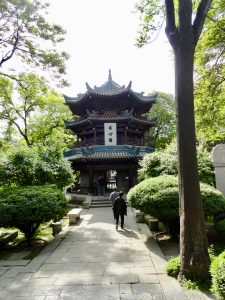 Long before Capability Brown improved English landscapes, Chinese and Japanese garden designers created “natural” gardens. Ji Cheng (1582-1642) observed in the seventeenth century that the purpose of a Chinese garden is to “hide the vulgar and the common as far as the eye can see, and include the excellent and the splendid.” In this photo, there is only a pathway to the pagoda.

Chinese gardens, like the photo below from Lu Garden in Shanghai, were constructed to recreate and miniaturize natural landscapes by setting up small scenes that could be viewed from pavilions, bridges, and winding paths. The garden wasn’t a space to be observed from one place, but contained visual vignettes of a pond, bamboo grove, or a blossoming tree. 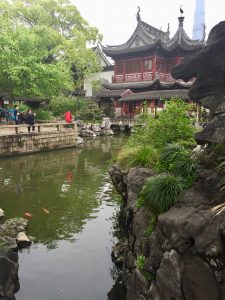 Chinese gardens are based on Confucian philosophy. Among their common features are mountains, either viewed from a distant point outside or built within. A mountain symbolizes virtue, stability, and endurance. Ponds are usually in the center of the garden as a complement to the mountain. Within the ponds are lotus flowers and goldfish that can be viewed from a pavilion. The latter were selectively bred from Prussian carp to achieve color mutations of gold, white, and red and white.

Among the plantings are the Three Friends of Winter that remain green in the cold months. Pine trees represent longevity and constance in friendship. Bamboo stands as the wise man who can bend without breaking. Plum trees flower in winter as a symbol of rebirth. 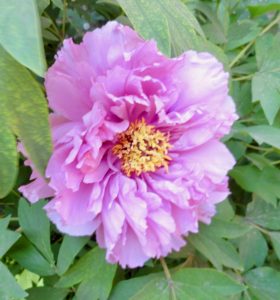 Other favored plants are the peach tree for immortality and pear trees for justice and wisdom. Lotus flowers for purity and peonies for opulence are also popular flowers.

Ji Cheng’s three volume book on gardens, Yuanye, appeared in 1631. Ji observed that the garden’s creator and the landscape are interchangeable as both object and subject. To build a garden, the creator must become one with the landscape. 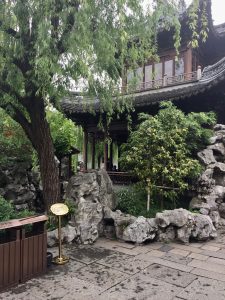 Constructing a garden is an all-consuming task in which the view “should include a watery expanse of many acres and contain the changing brilliance of the four seasons. The shadow of phoenix trees should cover the ground, the shade of pagoda trees pattern the walls. Willows should be set along the embankments, plum trees around the buildings; reeds should be planted among the bamboos.”

And there should be sound from the birds and insects, from the wind, from rain falling upon leaves, and from water falls.

During the Heian Period, Japanese culture derived a number of features from the T’ang Dynasty in China which were then blended with Buddhist philosophy. As a result, Japanese gardens developed out of the Chinese aesthetic, particularly the concept of creating a space that emphasizes the natural beauty found in nature. 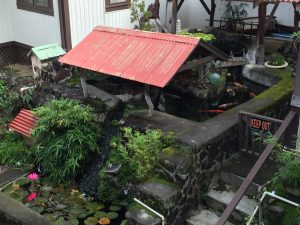 Rocks are an important element representing islands within water or sand. Sometimes white sand substitutes for the water element. In Buddhism, water and stone are opposites that complement each other. Fish, especially goldfish, came to Japan in the sixteenth century. In the nineteenth century specialists developed koi from common carp. If allowed to breed freely, they’ll revert to their original drab color.

Plantings are important with many trees selected for their change of color in the fall. And in the spring cherry trees put out their pink blossoms. Since the Heian Period, viewing parties have gone out to see the first cherry blossoms and then expressed their emotional response in the 17-syllable haiku.

“The cherries’ only fault:
The crowds that gather when they bloom”
— Saigyo, 12C poet.

“All flocked together
Blossoms upon blossoms.
Asuka Hill” 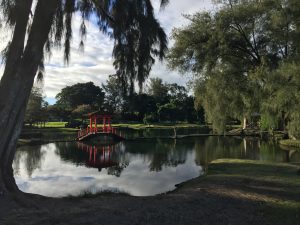 Gardens have different purposes. A Zen Garden is meant to be viewed as a whole. A promenade garden is viewed one landscape at a time, as in this view from Liliuokalani Gardens in Hilo HI.

If you’re inspired to view actual gardens and don’t have vacation time, you may want to view these two videos from You Tube. The first on Chinese Gardens is just over five minutes, and the second from the Kyosumi Garden in Tokyo runs just over three minutes.