Travel is a state of mind, an openness to new realities. It is challenging to travel close to one’s home. The terrain is too familiar; our eyes fail to see the nuances, the unique communities of place, or the historic context that can make the ordinary extraordinary. So, today I invite you to join me on my favorite beach walk – Waikīkī. The 1.5 miles of connected beaches seem commonplace, a feature on numerous postcards and souvenir photos — a place where tourists gather to worship sun and sea. But Waikīkī is much more. I walk these beaches whenever I have the chance. On June 1, I took my camera.

The word Waikīkī means “spouting water” and is said to refer to the rivers and streams that once flowed in the district and drained into swamps. In 1928, the water was diverted to the Ala Wai Canal, and the swamps disappeared.

Starting at the western end, Waikīkī is composed of at least seven named beaches:

I started my stroll at Gray’s Beach, about 9:00 in the morning.  Before Mrs. Gray built her boarding house and pier, Hawaiians knew the beach as a place of healing.  A channel in the reef fronting the beach was called Kawehewehe.  A sick person might walk into the water wearing a seaweed lei made of limu kala.  The supplicant left the lei in the water as an offering, hoping to be forgiven for any wrongs and therefore healed.

I receive mental healing when I release my mind to roam where it will on this seaside walk.  Tranquility, peace, time to disconnect.  So, here is the opening picture. 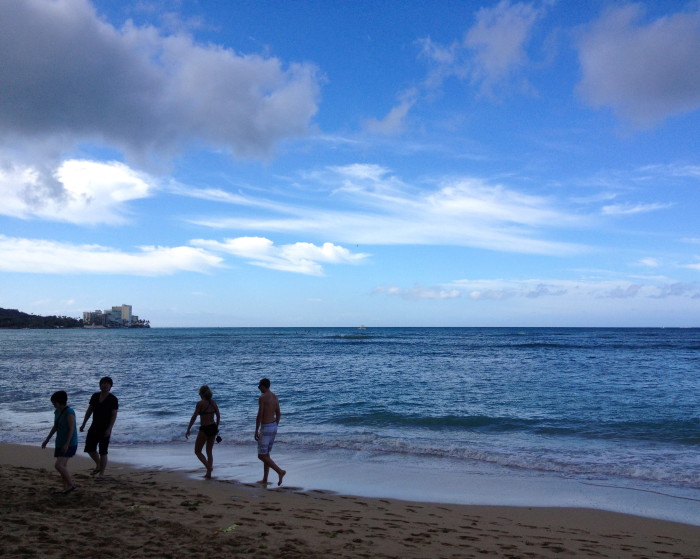 Walking east towards the structures in the left side of the picture, I took picture below.  As much as is reasonably possible, I try to forget the cosmopolitan recreational and shopping destination Waikīkī has become, and look for traces of what might have once been.  Consequently, I am more interested in what is happening near the water.

Here I’m nearing the Waikīkī Beach Center next to the Moana Hotel.  Take out the high rise buildings and it might have looked this way before tourism became such big business.  Surf, sea, and Diamond Head. 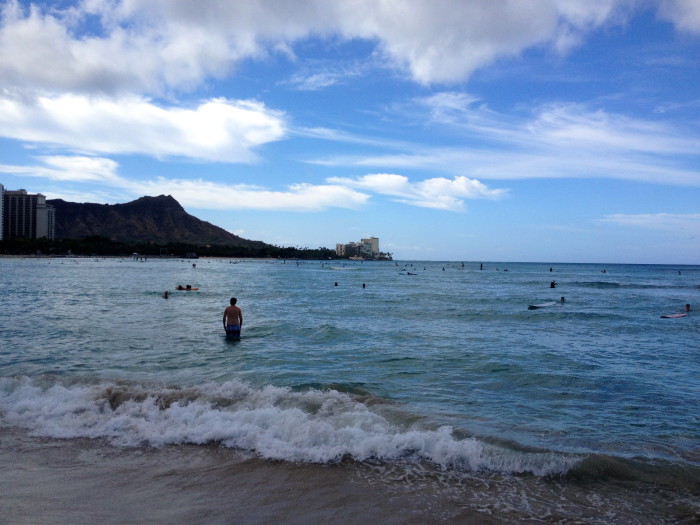 The Queen’s Beach Long Board Surf Competition took place the day I was walking, and people came early to find the best observation points.  Recreational surfers shared the water with early competitors trying the waves. 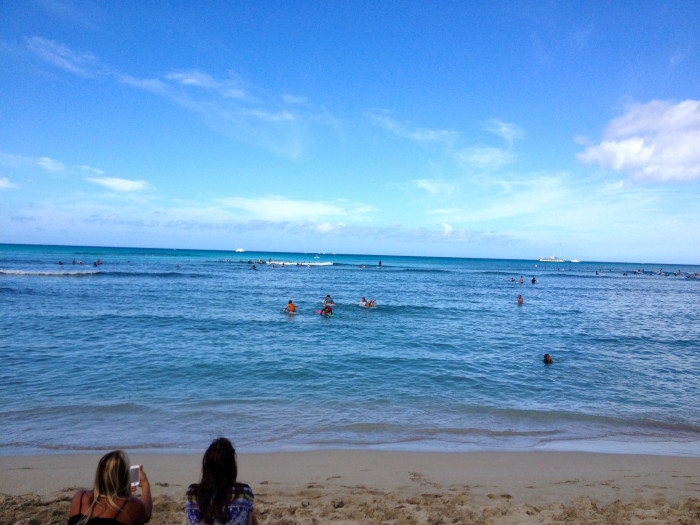 If you want to learn how to surf, or take a short ride on an out-rigger canoe or catamaran, you can find vendors to assist you.  But, just in case you think it’s OK to sit on the beached canoes, note the sign.  Beach craft is private property, and don’t forget it.  Kinda spoiled my mental illusion. 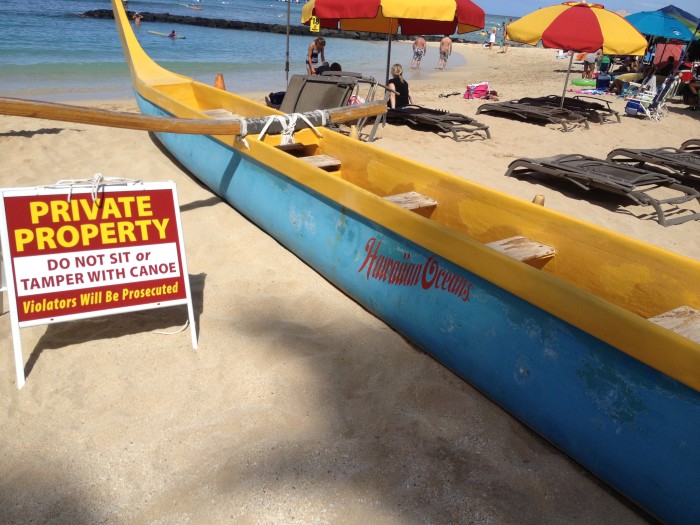 Next I sauntered towards Queen’s Beach.  I find this stretch endearing.  The breakwater makes a wonderful swimming area for our smallest keiki (children) – and a few adults as well. 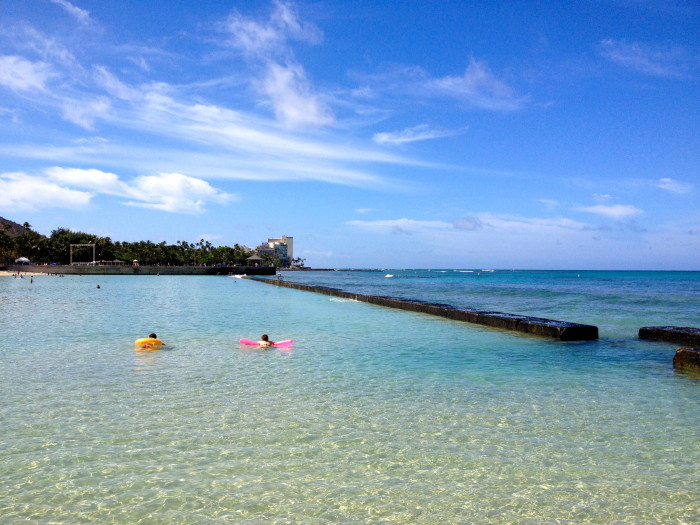 Queen’s Beach is named for Queen Liliuokalani, Hawai`i’s last reigning monarch.  The queen’s beach house and pier once stood on the approximate site where we now see beach volley ball courts and the huge outdoor move screen.  Honolulu City & County often shows movies here as part of the “Sunset on the Beach” series.  This is also where Hawai`i 5-O holds its seasonal premiers. “Book ‘em, Danno.” 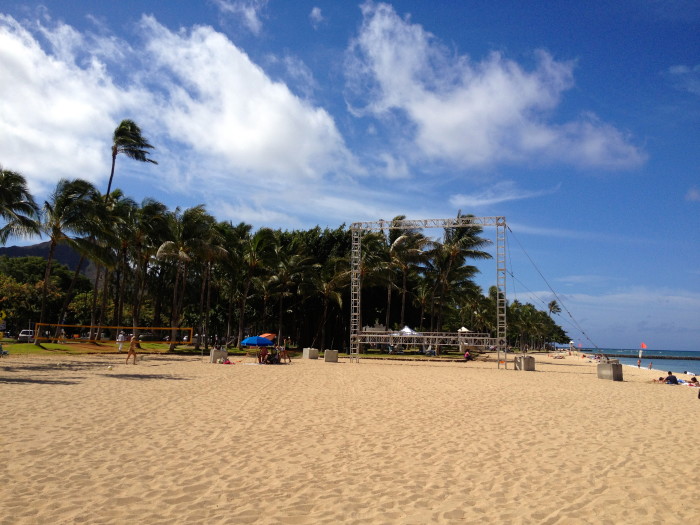 Now we come to the walkway known as Kapahulu Groin, because of the way it juts out into the sea. 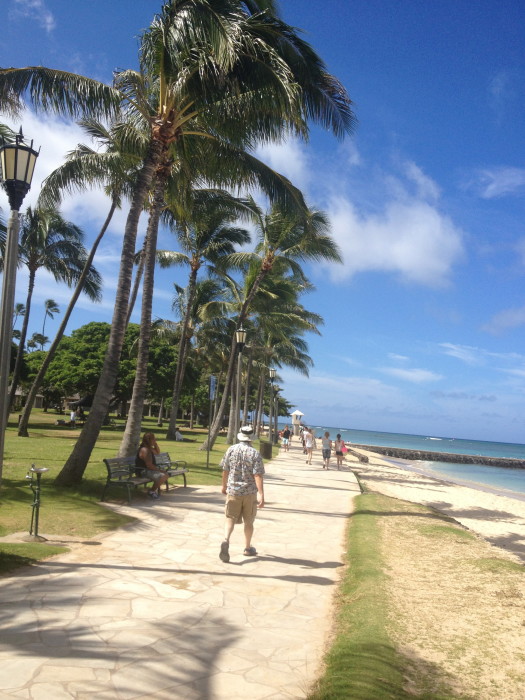 By now, I was a bit tired. More so, because I was walking on very warm concrete in bare feet.  But, I refused to quit, because just ahead I saw the War Memorial Natatorium, seen here in profile – the entry to the left and saltwater pool on the right. 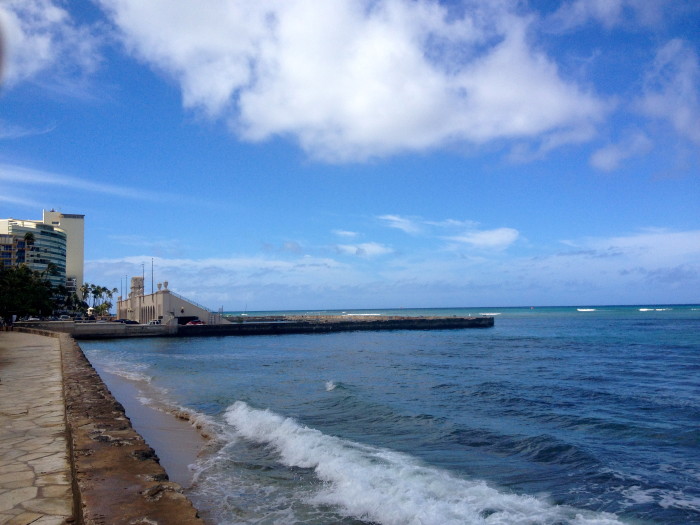 When World War I ended in 1919, Europeans and Americans built memorials to the war dead.  Since it was supposed to be the last war in history – sold to Americans as the “War to End all Wars,” the memorials were impressive.

In 1921 the Territorial Legislature of Hawai`i approved construction of a Natatorium to serve as a Living Memorial for Hawai`i’s 101 dead and 10,000 veterans.  But it was not your average war memorial.  It was a 100 x 40 meter saltwater swimming pool to host recreation, competitive swimming events, and visitors.

Duke Kahanamoku, Hawai`i’s 1912 Olympic Gold Medal swimmer, swam the first laps before a capacity crowd.  Other celebrity swimmers testing the waters were Esther Williams, competitive swimmer and film star, Johnny Weismuller, who defeated Duke Kahanamoku for the Olympic Gold in 1924 and later starred in Tarzan movies, and Buster Crabbe who took Olympic Gold in 1932 before becoming an actor.  Ah, those were the glory days.

Of course they could not last.  Owned by the State of Hawai`i; operated by the City & County of Honolulu, the facility fell into neglect and closed in 1979. 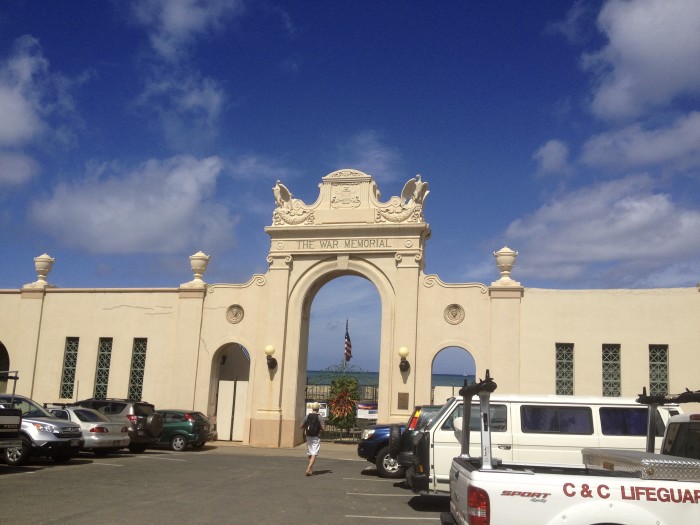 Restoration, however, remains incomplete.  In 2001, the locker rooms, bleachers, and the façade were repaired.  Then work stopped.  To the right of the above main (inaccessible) entrance is the side entry with sign shown below.  The signage is not inaccurate about holes in the deck.  While politicians haggle, conditions deteriorate.  One might say a natatorium was a poor choice for a memorial.  Of course, hindsight is twenty-twenty. 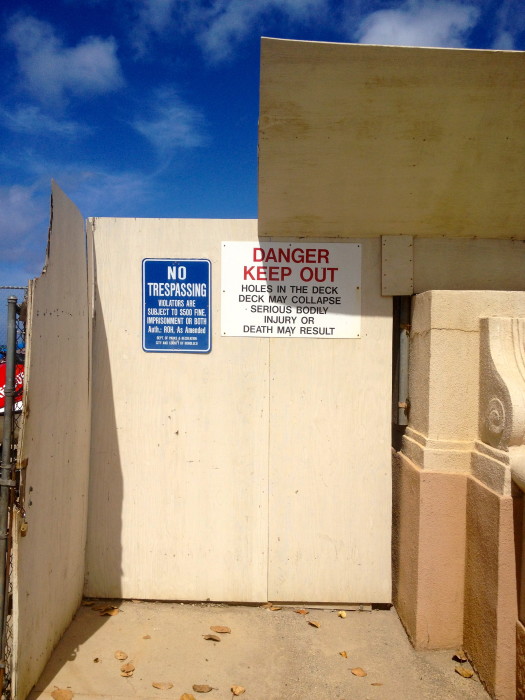 I started the journey back to Gray’s Beach.  It was near 10:30.  The walkway was hard, the beach more crowded.  But once I hit the sand, I was again delighted.  If you look between the high-rise hotels, you can make out three low structures.  The first is the Moana hotel, sometimes called the First Lady of Waikīkī.  The Moana opened her doors in 1901, the first resort hotel on Waikīkī.  Visitors came for the Season, and brought their cars.

It’s easy to pick out the “Pink Palace.”  The Royal Hawaiian Hotel opened in 1927 with a black tie event.

Just on the far left hand side is the Halekulani Hotel, first opened in 1907 as the Hau Tree.  Juliet and Clifford Kimball bought the site in 1917 and built a resort around a house, five bungalows, and a bathhouse – 21 rooms in total.  Over time, the property expanded to 115 rooms.  In 1981, Mitsui Fudosan (USA), Inc. took over the property, and created a new Halekulani.  It won’t take you on a trip down memory lane, but the site provides a serene oasis almost independent of the beach life around it. 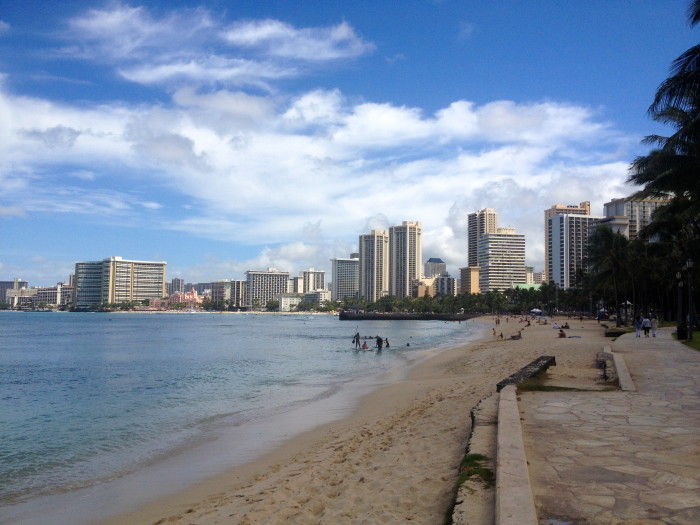 Kalākaua Avenue, the street running parallel to Waikīkī beach, has undergone various gentrification efforts.  One of these resulted in the statue below, depicting Makua and Kila enjoying the surf.  The image comes from a children’s story by Fred Van Dyke.  Once there was a boy, Makua, who swam with a Hawaiian monk seal called Kila.  Makua lived at Sunset Beach on the other side of the island, but never mind.  Waikīkī is about dreams, after all. 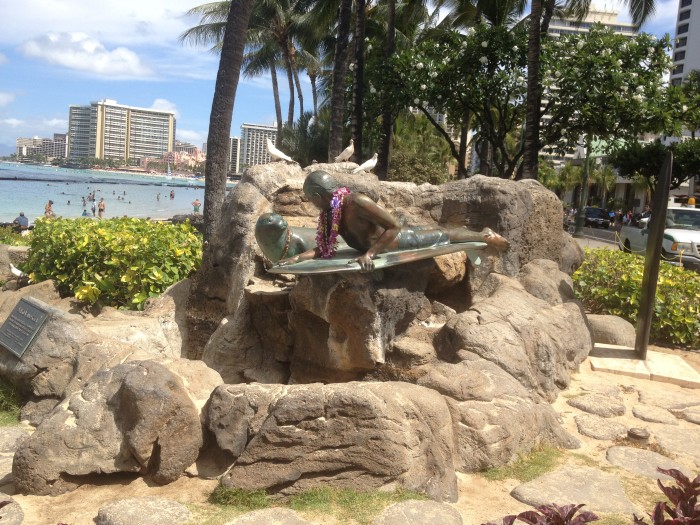 In the sea behind Makua we see surfers waiting for a ride to shore.  Here ends my beach walk story.  We don’t have to travel around the world to have new experiences.  We only have to open our eyes and minds. 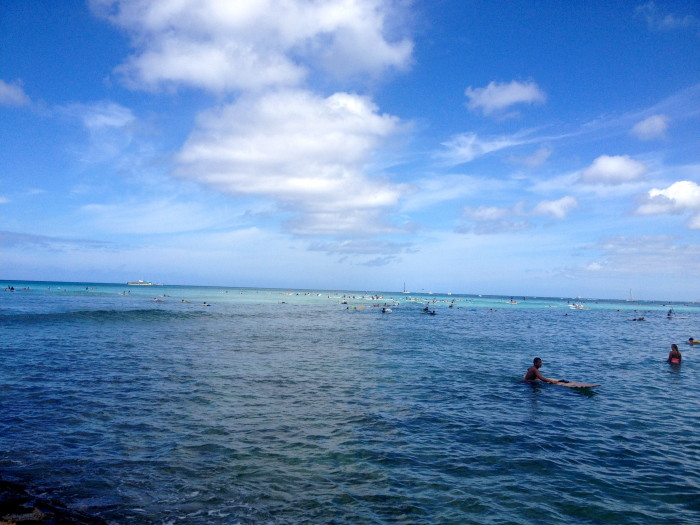 All photos by Author.  All Rights Reserved

For more information, check out