The Ellora Caves are eighteen miles northwest of Aurangabad, a small town in the Indian state of Maharashtria. Like the Ajanta Caves, the Ellora Caves are carved from a sheer vertical rock face. Unlike Ajanta, Ellora represents a more tolerant age during the Gupta period. At Ellora, Buddhist, Hindu, and Jain devotees coexisted and created architecture and sculptures between the fifth and tenth centuries of the Common Era.

The Ellora Caves are more accessible than the Ajanta Caves.  The terrain is flatter; the topography less uneven.  Many feature courtyards at their entrances. 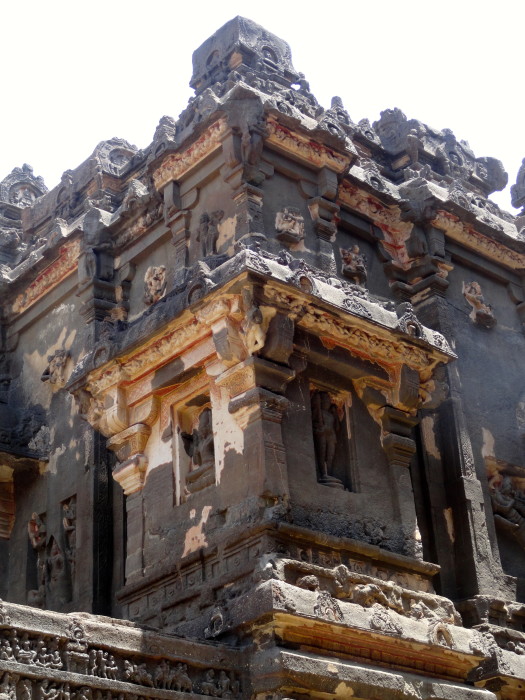 The most spectacular cave complex at Ellora is Cave 16, called the Kailasa Temple.  The temple is dedicated to Lord Shiva and designed to resemble Lord Shiva’s residence at Mount Kailasa.  Devotees carved the temple out of 85,000 cubic meters of solid rock, beginning at the top of the structure and working their way down.  Construction began in the mid-eighth century CE.  If you look closely at the picture above, you can see remnants of the original paint. 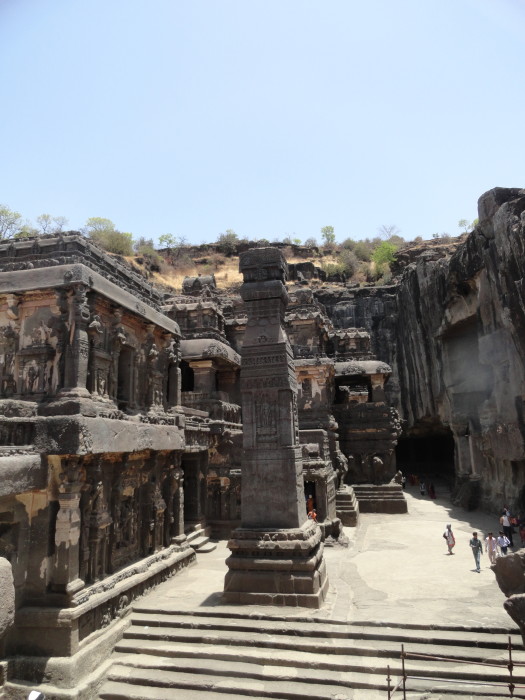 The complex is massive.  Free standing pillars and sculptures, primarily of elephants, were added after the main structure was complete. 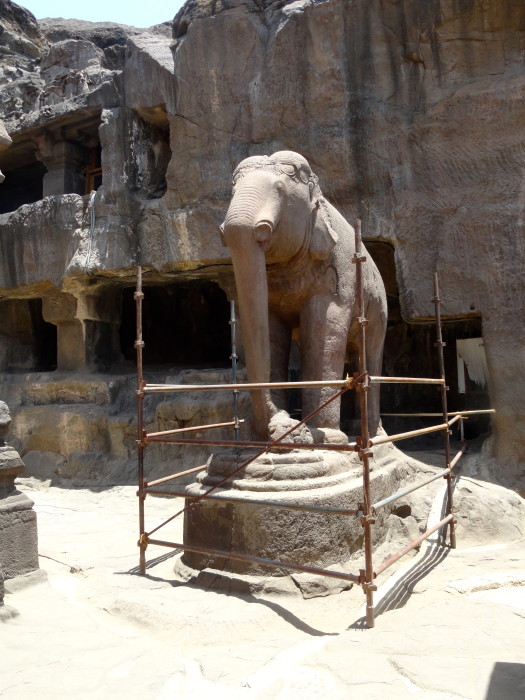 This elephant is in remarkably good shape considering the statue is exposed to the elements and over 1500 years old. 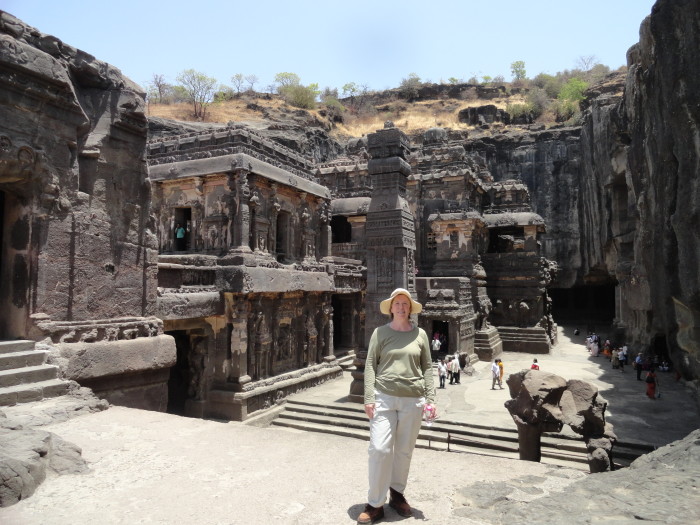 Once again, I offer visual proof I was on-site.  More interestingly, look behind me.  The picture gives a good indication of the complex’s scale.  So much stone and sculpture.

Lord Shiva is one of the most approachable gods, because he held himself outside structured society.  The bas-relief below is at the entrance to the temple and depicts Shiva killing a demon. 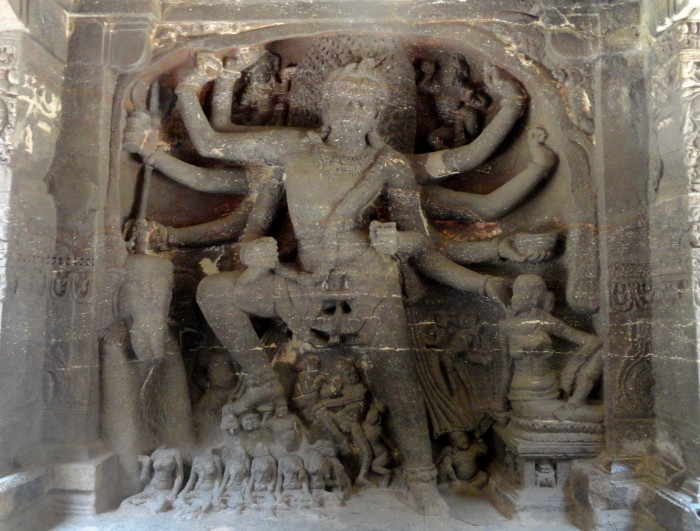 Kailasa Temple felt harsh with its unrelenting hard surfaces.  And then I spied a creature that softened the experience. 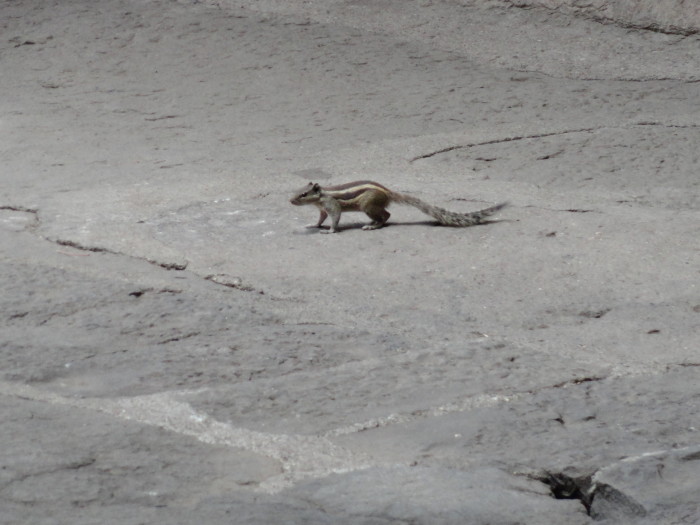 Kailasa Temple is the last place I expected to see a squirrel.  Yet, there it was, so tiny and quick, as it scurried across the open spaces and popped into a crevice between the stone blocks.  This is the Khaki Char squirrel (Funambulism palmarum), also known as the Three Striped Palm Squirrel.  Lord Shiva’s temple is a good choice for them, because they are considered sacred due to their association with Lord Rama.  According to the story, Lord Rama petted the squirrel and the lighter strips are from Lord Rama’s fingers.

There are also numerous bas reliefs on the exterior walls of Kailasa Temple.  Here is one of Ganesha the elephant-headed son of Shiva and Parvati. 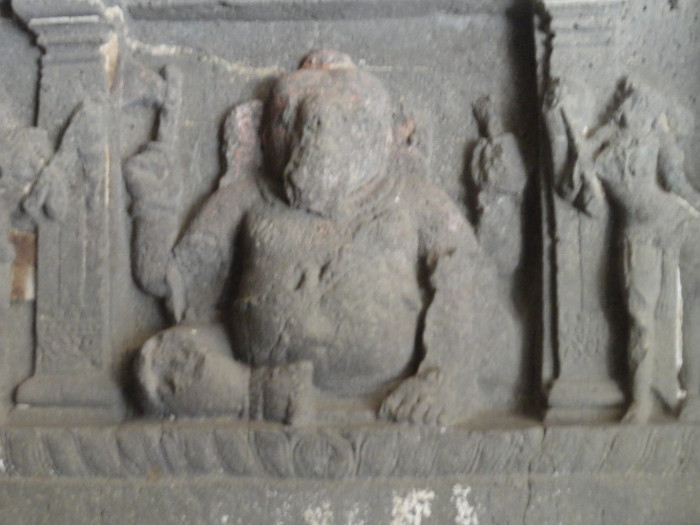 There are five Jain caves.  I took this picture in Cave 32.  The figure is identified as Jain tirthankara Mahavira.  He does not raise his hand in the position of teachers, because Jains did not teach directly.  Followers learned through observation. 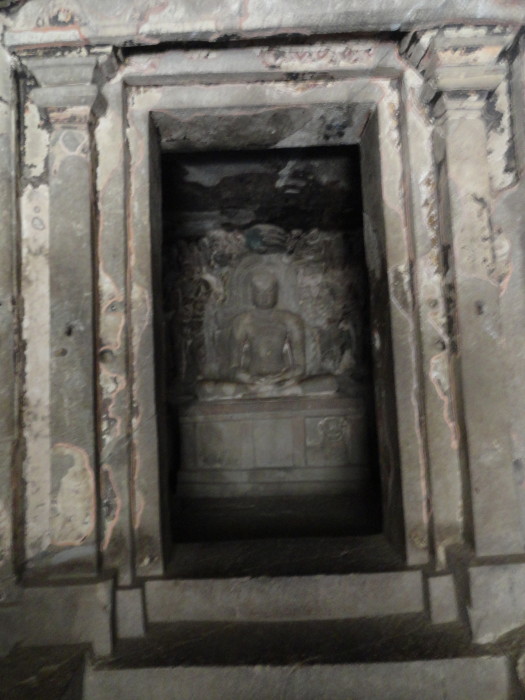 The twelve Buddhist caves were built between the fifth and seventh centuries CE by Vajirayana monks.  The most interesting Buddhist cave is Cave 10, often called the Carpenter’s Cave, because the ceiling is carved to look like wooden beams.  This picture looks up to the second level aisles.  Buddha is seated in the “teaching pose” with his righthand raised.  Looking on the frieze underneath, one can also see amorous couples enjoying life, indicating Mahayana Buddhism in the fifth century was less austere than in its early days. 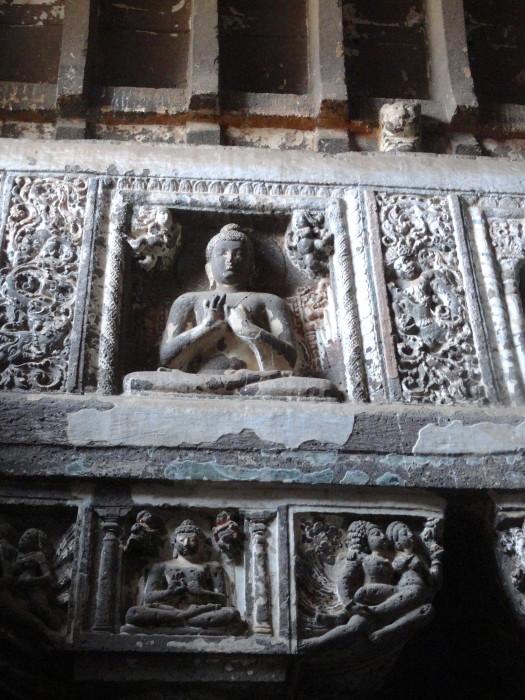 It is no wonder that the Ellora Caves are a UNESCO World Heritage Site.  Spending the day here gave me the opportunity to imagine what once was in a very concrete way.  This experience is the reason people like to travel — to exist in a different space for a few magical moments.

All photos by Author. All rights reserved.

For more information on the Ellora Caves, check out: