Over two hundred years ago Jane Austen observed : “It is a truth universally acknowledged, that a single man in possession of a good fortune, must be in want of a wife.”

As a writer Jane Austen saw and recorded many human foibles but this quote from Pride and Prejudice is the one most often remembered. Through several beautiful films and television series, the  romance of Elizabeth Bennet and Fitzwilliam Darcy remains in the minds of readers. Just to refresh your recollection of time and place, here’s a scene from the 1995 mini-series in which Mr. Darcy as played by young Colin Firth arrives unexpectedly to his estate at Pemberley, unaware that Elizabeth Bennet and her relatives have been touring the property.

Ah, the romance, the uncertainty, the sexual tension. All so unlike the 21st century singles scene, and attempts to tell Austin’s story in a contemporary setting. More on that shortly.

First let’s review the details. Elizabeth Bennet is the second of five daughters; Mr. Darcy the wealthy heir of an well-placed family. The Bennets are not well off, and their property is entailed which meant that in the absence of a son when Mr Bennet died, the property would pass to the nearest male relative.

[It’s the same situation we saw in Downton Abbey. Lord Grantham lacked a son, so his property would pass to the eldest male relative. In the end, that person turned out to be his grandson, which was nicely convenient.]

But back to the Bennets. In addition to Elizabeth, there’s her older sister Jane, a middle sister Mary, and two younger sisters Lydia and Kitty. Other characters include Charles Bingley, the man whose fortune is referred to above, Bingley’s arrogant friend Fitzwilliam Darcy, Mr. Collins a vicar and heir to the Bennet property, and the dastardly Wickham who seduces Lydia and very nearly “ruins” her, as they said in the eighteenth century. There are numerous minor characters as well.

There are some very real stakes in Austen’s story. Genteel spinsterhood as experienced by some lesser characters, is not a comfortable existence. Women did not enjoy financial independence. They did not have rights to their children. They had little choice in marriage partners. Mrs. Bennet’s obsessive desire to marry off her daughters was to keep them secure. Mr. Bennet’s lack of funds meant that in addition to the normal difficulties of making a match, the girls would not have attractive dowries. When Lydia ran off with Wickham, she completely destroyed any chance she had of a respectable, financially secure marriage unless it was to Wickham. When Elizabeth rejected Mr. Collins she not only repulsed a suitor, but insured that the family property would change hands. Jane Austen knew these situations first hand.

The quartet of Charles Bingley and Jane, and Fitzwilliam Darcy and Elizabeth form the core of the story. There is strong attraction within the respective couples and little chance to act upon it. Respectable women didn’t just nip round to the pub for a welcome drink. They attended local balls. They drank tea. They waited and hoped.

In the end Jane Austen put her characters out of their misery, but it wasn’t a foregone conclusion for the reader.

So that’s the story. Fans have a seeming insatiable desire to find out what happened next, and several authors have tried to answer the question. In 2011 P. D. James published Death Comes to Pemberley, quite a good read as well as miniseries. Shannon Winslow penned The Darcys of Pemberley (2011), and for those who wanted to know what went on below stairs, Jo Baker offered Longbourn (2013) a well-researched historical novel about the Bennet servants. 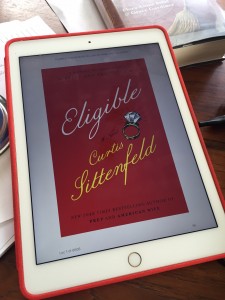 Eligible by Curtis Sittenfeld is an attempt to retell Pride and Prejudice in the 21st century. Many readers found the story rollicking good fun. I disagree. Eligible has no depth, innuendo, or sexual tension. No real stakes. And not much drinking of tea.

Mr. Bennet lives the childhood home he bought from his parents for $1.00 and has not kept up. He has no real occupation or interest, and in that he is similar to his predecessor. Mrs. Bennet wants to get her oldest daughters married. In this tale, Jane is 40 and Elizabeth, 38. They aren’t getting any younger. Her other obsession appears to be catalog shopping.

Reviewers note that Liz makes a living as a magazine writer. This apparent independence is diluted by her lengthy affair with Jason Wick, a married man. Sister Jane teaches yoga, not a well-paying occupation. She’s tired of looking for Mr. Right and uses her savings for intrauterine insemination.

Mr. Bennet has a heart attack; the older daughters rush back to Cincinnati from New York, and the story begins. Chip Bingley is an eligible doctor who appeared on a reality television show called – wait for it – “Eligible.” Fitzwilliam Darcy is a neurosurgeon and Bingley’s good friend. Cousin Willie Collins made his fortune in tech. Bingley, Darcy, and Collins keep the personalities Austin gave them.

The romantic quartet is formed as before. But there’s no real sexual tension, because it’s all worked out in almost immediate sexual activities. In Liz’s case, the activity is called “hate sex.” Not a lot of romance there. Of course, physical proximity can lead to emotional connection.

Meanwhile Lydia and Kitty do Crossfit. Lydia sparks a relationship with Ham; they elope. Hmmm….I don’t think elope is a word for the 21st century. Anyway, they get married. Eventually everyone calms down. Did I mention Ham is trans?

Eligible lacks romance, atmosphere, and character development, because though there are a few questions about how things will turn out, there’s nothing at stake. No one will become destitute. Everyone will live in Cincinnati, except Willie Collins who will remain in California with his wife, Charlotte Lucas, Liz’s childhood friend.

So there you have it. For myself, I think the story update works better in Bridget Jones’s Diary by Helen Fielding (2001), if only because she used Austen for inspiration rather than plot.

Bridget says: “It is a truth universally acknowledged that when one part of your life starts going okay, another falls spectacularly to pieces.”

Alas, that is often the case.

Pride and Prejudice by Jane Austen.

The Darcys of Pemberley by Shannon Winslow.

Cover of Eligible on my iPad.