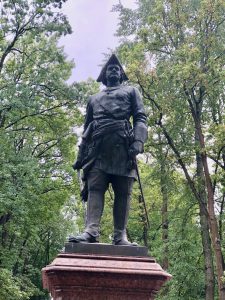 Peter the Great became the first of the Romanov tzars in 1682. Standing at six feet, seven inches tall he was an imposing figure. Today his legacy still dominates St. Petersburg, the city he founded on the banks of the Neva River as his Window to the West. So, it seems fitting to begin our visit to St. Petersburg with Peterhof, Peter’s Summer Palace facing the Gulf of Finland.

Peter wanted a summer palace he could use as he traveled to and from Europe via the harbor at Kronstadt. He also wanted a palace that rivaled Versailles, and spared no expense in money or manpower to make his desire a reality.

The dominant geographic feature is a bluff that is sixteen miles high, and less than 328 feet from the shoreline. The Lower Gardens stand between the bluff and the shore. The Grand Palace stands at the top the bluff. Behind it are the Upper Gardens. 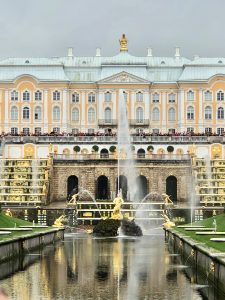 The Grand Palace looks imposing, but isn’t actually that large, having a mere thirty rooms. Initial construction was complete in 1724. Peter died the following year.

Empress Elizabeth, Peter’s daughter from his second marriage, expanded the property to the size of the present palace. Guides are quick to share two facts about Elizabeth. First, she was Peter’s “unofficial” daughter, since Peter and his second wife Catherine weren’t married at the time Elizabeth was born. Secondly, Elizabeth possessed 15,000 dresses, many of which are preserved. Why? Apparently, Elizabeth would not allow anyone to wear the same fabric or design she wore, and she changed clothes several times a day. But, I digress. 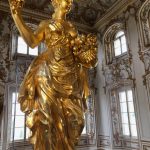 Elizabeth constructed the present palace in the baroque style around the walls her father erected. When Catherine II, also known as Catherine the Great, became empress, baroque was out of fashion. Catherine designed rooms with a more classical theme.

Entrance to Peterhof is via a ceremonial staircase featuring gilded statuary. The stairs open into a magnificent Ballroom, followed by the Throne Room. 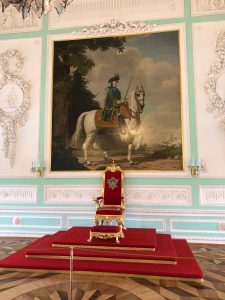 Behind the throne is a well-known painting by Erichsen of Catherine the Great astride her horse Brilliant. 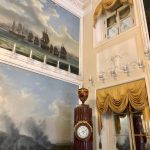 Catherine added Chesma Hall next to the Throne Room. The Hall is named for a series of paintings done to depict the Battle of Chesma during the Russo-Turkish War. Since the artist had never seen a naval battle, Catherine arranged for him to watch a ship explode so he could create more realistic paintings.

I thought the Oak Study depicting Peter the Great’s personal study extremely interesting in its simplicity, though it seems unlikely Peter kept such a tidy space. Peter allegedly designed the chair to his specifications.

THE TRUE GRANDEUR OF PETERHOF IS IN THE GARDENS.

The Grand Cascade in front of the palace contains three waterfalls, 67 fountains, and 37 golden statues with the statue of Samson ripping open the jaws of a lion at its center. The fountains run into the Marine Canal and flow into the Gulf of Finland. They run without the use of pumps. Water gathers in reservoirs in the Upper Gardens and gravity does the rest. 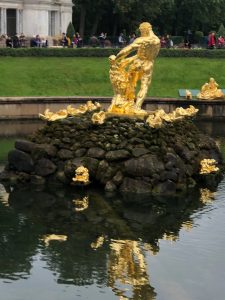 The Samson Statue joined the fountain in the 1730s to depicted Russia’s victory over Sweden in the Great Northern War. The lion is part of the Swedish coat of arms. Samson symbolizes Peter, and the fact that Russia won the battle on St. Samson’s Day. The highest fountain shoots a sixty-five foot jet of water from the lion’s mouth. 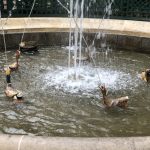 My favorite fountain, and the only one with sound, has mechanical ducks being chased by an equally mechanical dog. Barking and quacking ensue. 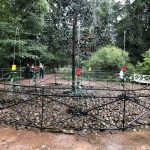 Peter was fond a practical jokes. Several fountains shoot unexpected showers on unsuspecting guests. This trick fountain, for example, has a place for someone to hide and shoot water unexpectedly as this video demonstrates.

Peterhof is amazing. The Summer Palace associated with Catherine the Great is even more so. We’ll visit it next time.