OLYMPIC HOTEL.  When I was a high school student in a Seattle bedroom community on the other side of Lake Washington, those two words symbolized all that was posh and sophisticated. I never dreamed I could set foot inside such an illustrious palace, let alone stay there regularly.

The Olympic Hotel is a palace of dreams and romance. The proud result of a city’s efforts to place itself on the map of sophistication – proof that Seattle was more than the last stop on the way to the Alaskan Gold Rush. City Fathers had a challenge: What edifice could make Seattle as sophisticated as San Francisco?

One visible answer is the University Avenue façade. Let’s float back in time, to 1861 when Arthur Denny, one of Seattle’s pioneers, donated what was known as Denny’s Hill to be used for a Territorial University.  The current plaque denotes Denny, his wife Mary, and five of their colleagues as university founders.  In 1895 the university moved away from what had become ten acres of prime metropolitan real estate.  But the Regents kept the property – a wise decision.

Fast forward – zip-zip-zip.  World War I was over; the United States was enjoying massive economic growth. Members of the Seattle Chamber of Commerce decided their town needed a world-class hotel. They partnered with the Metropolitan Building Company to form the Community Hotel Corporation and launch a public bond drive.  Developers sold $3,000,000 worth of bonds to 4500 individual investors.

The Seattle Times encouraged public excitement with a contest to name the hotel.  Out of nearly 4,000 entries, real estate broker Robert E. Ellzey won the $50 prize, which he promptly donated to construction costs.  Good thing too, ‘cuz when construction finished in 1924, the bill came to $4,500,00 – which was a lot of money.

Grand Opening, December 6, 1924.  The modified Italian Renaissance style hotel had 617 rooms – all with en suite bathrooms, or at least showers.  There were crystal chandeliers, damask drapes, walnut furniture, and plenty of marble floors.  Bellhops wore uniforms with gold buttons.  Such opulence gave more than one of the guests the vapors, I’m sure. As the Seattle Times gushed: “In the province whence come social calendars, a capitol has been provided.”

The Olympic Hotel Company did not let such praise go to its head: “The management will give service in keeping with this civic monument, which typifies the enterprise and public spirit of Seattle”

Such modesty turned out to be a good idea.  The stock market crashed in 1929.  By 1933 the hotel was in receivership.  She limped along during World War II.  In 1955 Westin Hotels took over management.  The Olympic gathered her increasingly tattered skirts and held up her head.  She was still the most famous hotel in Seattle.  But it wasn’t the same.

Everything changed in 1979.  Four Seasons Hotels & Resorts took over.  The Olympic became an historic property. The new managers embarked on an astonishing $62.5 million restoration, beginning with a garage sale of almost everything in the hotel. Workers pealed World War II black-out paint off the walls of the Georgian Restaurant; sandblasting restored a soft tan color to the exterior facades, and original crystal chandeliers sparkled once again. 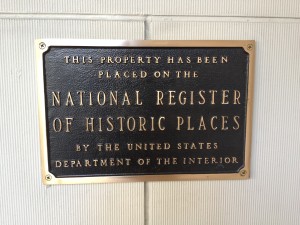 At the Grand Re-opening on May 23, 1982, Albert Kerry and his wife were the first to register. Kerry’s father attended the original Grand Opening. As Kerry began to sign the register, his wife Audrey announced, “It’s a new world. I’m signing for myself.”

Even more astonishing, the Four Seasons Olympic was the first Seattle hotel to have valet parking.

The remodeled circular entrance and drive faces University Avenue with the hotel’s only garden and fountain.

In 2003 Fairmont Hotels & Resorts became the new proprietors with a continued commitment to Five Star Service. 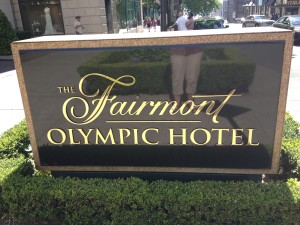 Times have changed since 1924.  The Olympic Hotel has many competitors in the greater Seattle area.  But I suspect the panache of attending an event at the Olympic Hotel is still present.  And those two words – Olympic Hotel – still mean romance, sophistication, and class.