Once upon a time, four or five years ago, I decided it would be nice to have a fountain in the back garden. Sort of a trickling brook. I found a nice place for it – or at least I thought so at the time. My daughter and her boyfriend were staying with us. I proposed that while the Handsome Bloke and I were away on vacation, they could earn some extra money by putting in the water feature.

My fairly exact last words as we left were: “I do not want fish.”

When the Handsome Bloke and I returned, the water feature was complete and charming.

“And guess what, we bought four fish. Come look.”

I don’t have a good track record (or should I say water slide?) with fish. As a child, I had several goldfish, and none lasted a year. So, I felt compassion for these new finny friends. I feared their lifespan was already shortened.

We walked into the garden. One fish apparently thought it was a bird, for it had flown out of the water, and lay on a paving stone.

“Why did it have to be my fish?” daughter exclaimed to her boyfriend.

And so there were three.

“Don’t worry, Mom,” the boyfriend said. “The fish will eat the algae, so you won’t have to feed them or clean the pond.”

“Then why are you dropping fish food?”

Over time, I became fond of the fish. Although they seemed blissfully unaware that they should be eating algae. A few weeks later the remaining guppy was no longer visible. Eventually, I transferred the koi to clean out the pond. The guppy had gone.

Every day I fed the fish whom I eventually named Gracie and Allen. Gracie rushed for the food and grew more quickly. Allen lagged behind.

“You better get your food, Allen, or you’ll always be smaller.”

Time passed. I got interested in feng shui and decided the water feature was in the wrong part of the garden.  Besides, there was not enough water for the fish to have a good swim.  So, we put the still small koi in a 5 gallon container, put in a pump, and kept it near the passageway where I could see them.

Here they are in their element shortly before Fish Liberation Day.  They had grown from fingernail size to as long as my index finger and filled out.  They were outgrowing their watery home, and the wire mesh on top made it look like they were in prison.

The wire was for their protection.  Not long after they moved into to the container, one koi was found on the patio. The fish might have jumped, or the cat might have helped it along. Either way, the mesh kept the koi in the water. And I gave them little obstacles to keep their fishy minds active.

But I knew Gracie and Allen needed more space. I wanted them to swim free and have plenty of room to achieve their complete fish nature.  My friend manages the property at Hilo Lagoon Center – a veritable playground for koi.  They have fish over 40 years old.  To keep Grace and Allen in such a small pool, when there was a pond available seemed unfair.  I paid a site visit to check out the pond.

“May I give you my fish?” I asked my friend.

“Of course. Do you want visitation rights?”

And the deal was done.

I called my son.  “Would you come over and help me move Gracie and Allen to Hilo Lagoon? I’m afraid one of them will jump out and hurt itself.”

One of the fish did jump out.  My son saved the day.  Here you see Gracie [always the feisty one] safely in the transport cocoon.

Allen had a matching limousine – and was smart enough not to jump out.

We drove to Hilo Lagoon.  The security guard who takes care of the fish promised Gracie and Allen would be happy. The fish get regular salt baths to keep everything balanced. The ponds are completely cleaned out twice a year.  I sighed.

Son began to pour out the bags.

Not my little koi any more, Gracie and Allen had moved on to the Big Time.  Never even raised a farewell fin. 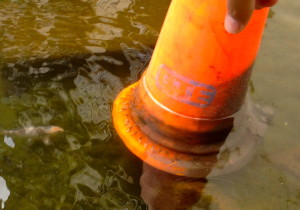 For a moment the fish seemed in shock.  Where the heck am I?  Then  Wow – look at all this space. I can swim in a straight line.  Whee! 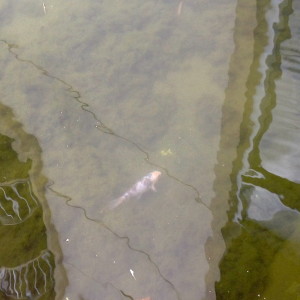 And, so another life transition has taken place.

I’m proud to have nurtured these two koi.

May they have a long and happy life at Hilo Lagoon Center.

Pictures by Author. All Rights Reserved.