I met Nellie Curtis at The Pike Brewing Company Pub located at the edge of Seattle’s Pike Place Market in the old LaSalle Hotel Building. Seattle is known for its microbreweries. My daughter thought it would be fun to check out Pike Brewing founded in 1989. We ordered the tasting sampler. First on the list was “Pike Naughty Nellie — A golden organic artisan ale named for the madam at the LaSalle where Pike was founded. Light and curvy with plenty of sex appeal.” 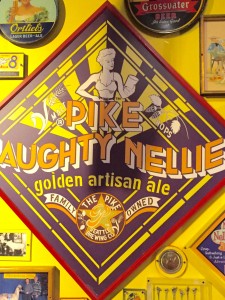 Nellie was Nellie Curtis except when she was Zella Nightingale or Yetta Solomon or Nellie Gray. Mostly, she seems to have been Nellie Curtis. I couldn’t find any pictures of the real Nellie, but the opening image is probably true to life. Nellie was a businesswoman who knew how to give men what they perceived as a good time.

As luck would have it, we sat at a table where Nellie has a permanent reservation. The label read “Nellie’s Table — Nellie Nightingale Curtis was small of stature with a big appetite. Always dressed to a T, she was often seen dining around town with local politicians and businessmen who shared her passion for the finer things in life.”

Nellie arrived in Seattle and opened for business in 1933 at the Camp Hotel on First Avenue and Virginia. In 1942 Nellie took advantage of the post Pearl Harbor relocation of Japanese-Americans. She bought the lease to the Outlook Hotel located at First and Pike from the Kodama family, and renamed it LaSalle. One source suggests the name was a reference to General Motors LaSalle luxury car. 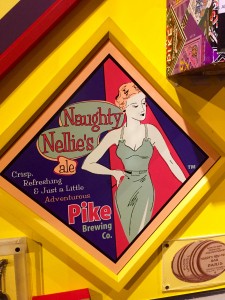 The LaSalle Hotel had seventeen permanent guests. Nellie once said, “If they stayed a week, I called them permanent.” Other guests were less rooted. Some rooms changed hands three times a night. Nellie said she didn’t know why guests left so quickly. “I never asked any personal questions.”

Nellie kept two rooms for her own use. She kept her collection of hats in one and her collection of money in the other. In 1951 Nellie sold the hotel to George and Sodeko Ikeda. Sodeko watched Nellie look for the key, and recalled “she couldn’t find the key…I saw a lot of money in every drawer she pulled out…she had a vanity and a dresser. She pulled out the lampstand drawers too. And in every drawer she pulled out she had a lot of cash.”

The Ikedas had a hard time convincing Nellie’s “clients” the new hotel was respectable. Finally they posted signs saying NO GIRLS.

Nellie left Seattle and settled in Aberdeen, a small town near Gray’s Harbor, where she bought the Cass Hotel for $25,000 and invested another $10,000 in renovations. Nellie called the establishment Curtis Hotel.

Nellie’s life in Aberdeen became even more colorful than her Seattle reputation. More to come next week.

2 thoughts on “NAUGHTY NELLIE – “a madam of legendary proportion””