Guide Dog Spencer McGarrett became an integral part of our family the day he arrived as a well-trained, gangly one-year-old puppy, ready for life in the tropics. The Handsome Bloke spent a month training with Spencer at Guide Dogs Victoria in Australia before Spencer’s adventures began.

Two years ago Spencer retired. Reflecting on his life, Spencer thought blogging might be a good use of his time. I gave him a slot, but after his first appearance Spencer decided he’d rather not pursue the writer’s life. You can read his blog here.

Like the Handsome Bloke, Spencer loved Hawai`i. He also loved to travel. Within a year he joined the Handsome Bloke and me on vacation in the Canadian Rockies. This entailed a long distance flight to Chicago, followed by a short hop up north to Toronto on a much smaller plane. The kind of plane that encases the boarding stairs in the forward door. The first step was over a foot off the ground. Spencer had never seen anything like it. How, he wondered, could he make the first step, let alone get to the top?

Spencer walked up to the step. Nope. The Handsome Bloke led him back, circled him and encouraged another go. This happened several times. At last Spencer made up his mind and took a giant leap that took him half way up the stairs. He kept his footing and sauntered through the door, smiling. 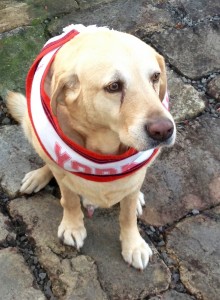 Spencer made many trips to Honolulu, Seattle, and England where he became a supporter of the York City Football Club. 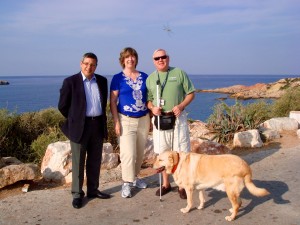 Spencer traveled to Greece. Note the red collar he’s wearing. It was on sale at Harrods Department Store. 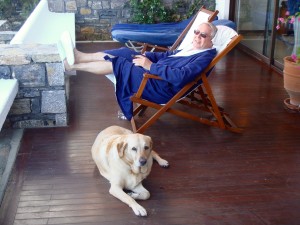 Off duty on Crete, Spencer joined The Handsome Bloke for some relaxation. 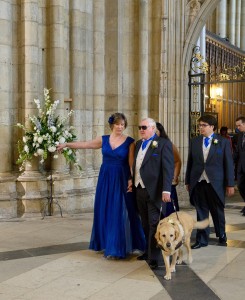 When the Handsome Bloke and I renewed our wedding vows, Spencer led the way. Notice I wanted to go right.

Spencer transitioned to another existence last week. I think of him smiling and enjoying his new home. The Handsome Bloke and I were blessed to have him in our family. We miss him. 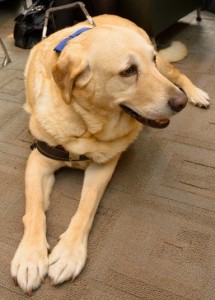