When you think of Washington D.C., what comes to mind? Most people think of visiting the White House, the Capital Building, and Mount Vernon. Maybe various exhibits at the Smithsonian Museum. But, unless you’re an academic researcher, you might overlook the Library of Congress, and it’s well worth an excursion.

Congress established the Library with an appropriation of $5000 in 1800 to provide reference materials for the government.** The following year, 740 books and three maps arrived from London booksellers. The British burned the library along with most of city’s public buildings when they raided Washington on August 24, 1814. At the White House they found a table set for 40 diners and sensibly decided to enjoy the food and wine before destroying the residence. 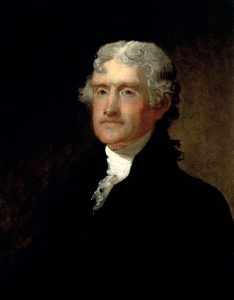 Thomas Jefferson immediately offered to sell his personal library of over 9,000 volumes at a price determined by Congress. Regarding the breadth of topics under consideration, Jefferson wrote, “I do not know that it contains any branch of science which congress would wish to exclude from this collection…there is in fact no subject to which a member of congress may not have reason to refer.”
The purchase price worked out to $23,950, an amount based on the measurements of the sizes of all the books.  In April 1815, ten wagons left Monticello carrying 6,707 volumes packed in pine cases. A new Library of Congress was born.

THE MODERN LIBRARY OF CONGRESS 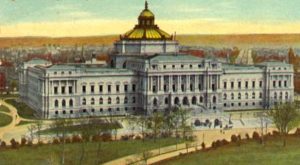 Over the years the Library outgrew its space in the Capital Building and in 1897  moved  into its own structure. When it opened, the Library of Congress building was considered the most beautiful building in the city.

The design was based on the Paris Opera House, in a style now called Beaux Arts -neo-classical. 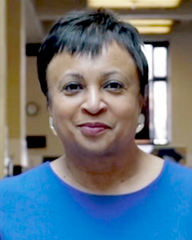 Today as Carla Hayden’s tenure as the fourteenth Librarian begins, the Library of Congress has three additional buildings – the John Adams Building (1939), the James Madison Memorial Building (1976), and the Packard Campus for Audio-Visual Conservation (2007).  The collection containing over 162 million items is overseen by a staff of 31,000 employees, and an annual budget of nearly $650 million.

Hmmm….I need to schedule some research time in the Main Reading Room. 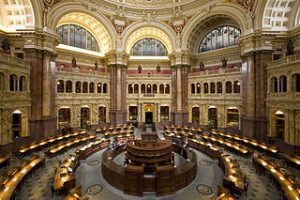