Once upon a time, people thought that somewhere in the New World there existed a Fountain of Youth. They thought anyone who drank from it would be restored to youthful vitality which was the next best thing to immortality. It’s unclear whether the lucky finder would have to camp nearby and drink from it every day, or if one swallow would return a lifetime of vitality.

The myth had legs. I remember learning in about the Fourth Grade that the reason Ponce de Leon was in Florida in the 16th Century was because he was searching for the Fountain of Youth. He didn’t find it, but he still claimed the real estate for Spain. Now this anecdote is an official myth – though one might wonder whether the myth is due to the non-existent fountain or Ponce’s lack of belief. Either way, we have been disabused of the concept. There is no Fountain of Youth.

There is only diet, exercise, and the avoidance of disease. 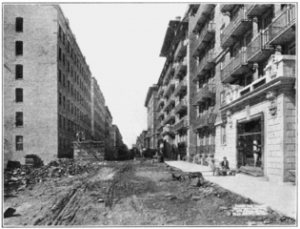 In many ways the last century could be called a century of longevity in the developed world. Better sanitation, access to medical care, penicillin, and sterilizing medical and dental instruments contributed to longer lifespans in 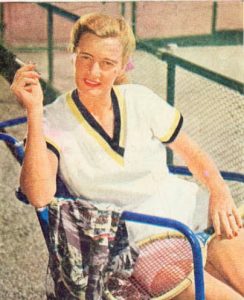 Since 1950 other factors have increased longevity — better medical technology, cleaner water and air, better housing, access to food, pharmaceutical breakthroughs, and more understanding of behavioral effects. Smoking, for example, not only has a negative effect on the individual smoker’s health, but also on the health of non-smoking bystanders.

Though people are living longer, the quality of life isn’t necessarily better. Youthful attributes of moving and digesting freely are affected by increasing rates of obesity, diabetes, heart disease, cancers, and a great many other conditions, all of which are expensive to treat as well as unpleasant to have.

Now we’re looking for a recipe for a long and healthy life. We want to look young, feel young, and live without discomfort. Research funding  from insurance, health foundations and government sources seeks solutions with the same enthusiasm Ponce de Leon may have looked for the Fountain of Youth.

One result is the discovery of what Dan Buettner calls Blue Zones. The concept came to my attention when the official Blue Zones Hawaii Community Program Manager spoke at my Rotary Club. East Hawai`i, which includes my home town of Hilo, is an official Blue Zone Project Demonstration Community. HMSA, a major health care insurance company, brought Blue Zones to Hawai`i, starting with the island of Kaua`i in 2013.

Buettner coined the term Blue Zones for the five communities where he found people living long, healthy lives: Ikaria, Greece; Okinawa, Japan; Ogliastra Region, Sardinia; Loma Linda, California; and Nicoya Peninsula, Costa Rica. I note that with the exception of Loma Linda these were places without many temptations for easy rides or fast food. And the Blue Zoned folks in Loma Linda have religious reasons for their healthy lifestyle. 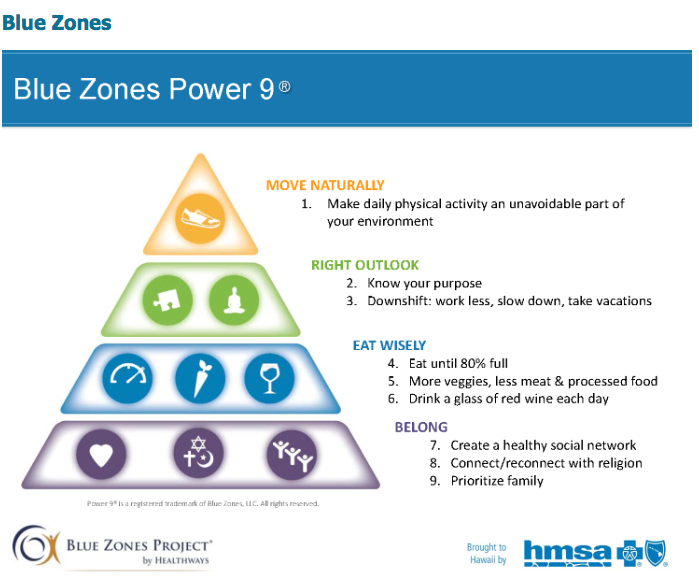 From the experiences of people in the five Blue Zones, Buittoner distilled what he calls Power Nine. – Nine behaviors to improve the quality and quantity of life. None of these is a new idea, but all of them are good for us. Whether we choose to follow this health advice or not is up to us. 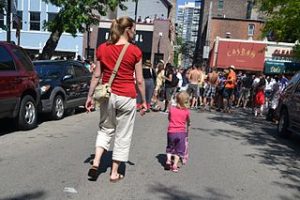 The good news is moving naturally doesn’t require sweaty gym workouts or Triathlons. It means ambient physical activity as mundane as getting up to change the television channel instead of using the remote control. Of course, you’d have to change channels frequently to get the benefit.

2. Have a Sense of Purpose — Get up ready to face the day with focussed activity. It might be nurturing your tomato plants, volunteering to coach your kid’s soccer team, or joining the community chorus. The point is not to get up with a negative attitude. 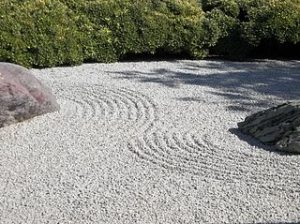 3. Downshift & Destress. Pray, nap, sit by the sea, or contemplate a zen garden.
4. Follow the 80% Rule — Eat until you’re 80% full. We’ve been told for years that our stomachs are full before the brain tells us to stop eating.

Do what the USDA advises. Put more beans, vegetables and fruits on our plates. Reduce meat intake. 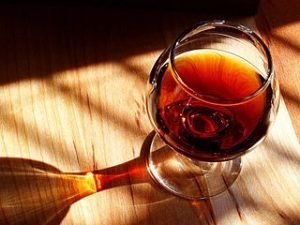 6. Wine @ 5 — or tea, or lemonade. The point is to share a glass with food and friends. It’s not about the wine or even the time. It’s hanging out with your Tribe and talking story. 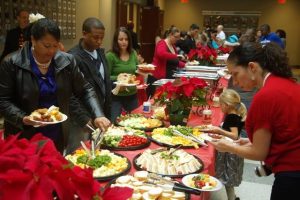 Hang out with friends that support you & healthy behaviors. People you can cook with, walk with, laugh with. People with a positive attitude.

Seems redundant, but this refers to a faith based group – could be your tribe. Don’t try and do everything yourself.

Take time to eat together, chat, shoot hoops in the driveway –  that sort of thing.

What Buettner contributes to the discussion is a community aspect. We know we should reduce our fat intake, but if all our friends are eating jumbo fries, we probably will too. So the trick is to have friends with good behaviors and everyone mutually reinforces each other. That sort of thing.

Buettner’s most recent book is The Blue Zones Solution. He lays out the changes that have happened in demonstration communities. Which brings us back to Hilo.

HMSA has been urging us to walk with a friend for some time. The organization believes small changes can result in longer, healthier, happier lives. And HMSA hopes Blue Zones can make this happen.

So, what’s been happening since Hilo became a demonstration project earlier this year?
– Chiefess Kapiolani Elementary School met requirements to become the first Blue Zone School in Hawai`i
– Sweet Cane Cafe is the first Blue Zones Project Approved Restaurant
– Three other food outlets and one other school are involved in the project
– Cooking and gardening demonstrations have taken place

And the first time I heard about the project was at my Rotary meeting last month. – That’s not the way it sounds in the book. In the book, the whole town gets excited. I feel like I’m in the wrong reality TV show.

So what am I saying?

Would I like the Blue Zones Project to take off?

Absolutely. Then maybe we could move forward more quickly on the Hilo Bayfront Trails project, and maybe we could get bike lanes somewhere besides the street that runs by the university.

Do I think Hilo will make the grade as a Blue Zone Community?

Hard to say. I found no data on how successful Kaua`i has been since being designated three years ago. I don’t see even our most community-minded grocery store touting Blue Zone foods. I don’t see publicity about other schools taking the challenge.

Word-of-Mouth is the one way to get things rolling. Hence this blog.

Could I do better? — Absolutely.

What do you think about Blue Zones?

Soldiers and civilians of Headquarters and Headquarters Battalion, with their spouses and children, came together for a great family event in the spirit of the season at Patton Hall for the Family Readiness Group holiday party Dec. 14. (U.S. Army photo by Sgt. 1st Class Tim Meyer, U.S. Army Central Public Affairs.)Public Domain. Wikimedia Commons.