Since today is the last Monday of Women’s History Month 2016, I thought it might be interesting to look at why the majority of technological voices are female. A few weeks ago we looked the popularity of “female” robots. Realistically, most of us are unlikely to ever encounter a life-size robot of any gender, but all of us hear disembodied voices in the female sound range.

I can give you various reasons for the popularity of female voices from their uniqueness to our culture’s willingness to accept female guidance. But rather than make you wade through all that information, let’s cut to the chase. The real reason artificial voices sound feminine today is HAL, the renegade computer in Stanley Kubrick’s “2001: A Space Odyssey.”  To understand HAL’s long-term effect, listen to HAL’s response when told to ‘open the pod bay doors.’ More Factoids follow.

HAL is, quite simply, out of control and the hapless astronaut is about to become celestial toast.

Curiously, in earlier drafts of the script the computer was called Athena and had a woman’s voice. As the script continued into development someone apparently thought HAL was a better name, because it’s a combination of the names of two types of computer learning: Heuristic and ALgorithmic. And since HAL is defined as a male name, the computer needed a male voice.

HAL’s example persuaded the public that male computers couldn’t be trusted. So computer programmers moved towards gentler guidance voiced in the female range. 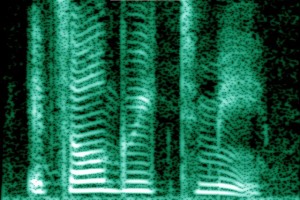 The above picture is a spectrogram of the sentence “It’s all Greek to me” being spoken by a female voice. It also explains why we probably don’t want to see a spectrogram of Siri, Alexa, or any other talking machines.

The primary reasons why female voices are used in technical communications are:

Likability. People generally have a preference for female voices. Clifford Nass, an expert in how people interact with  machines, pointed out that it’s easier to find a female voice everyone likes than to find an equivalent male voice. This is because theoretically the human brain likes female voices from the time a child recognizes her or his mother’s voice.

Preference: Female voices seem less authoritative. Rather than telling the listener what to do, the voice “guides” the listener to the correct choice.

History: The most often cited reason for the use of female voices is their application in cockpit navigation systems during World War II. Since no women were actually in aircraft cockpits, the voice stood out. The fact that this is no longer the case is thus far unable to override historical usage.

Another aspect for female voiced technology is rooted in the lives of working women. Once men discovered that being a telephone operator wasn’t particularly exciting, women filled the slots. The public became accustomed to female voices coming out of a machine. 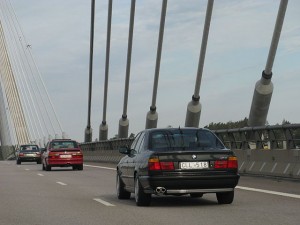 Exceptions to Above Assumptions

In the late 1990s BMW had to recall the female voiced navigation system on its 5 Series cars. The company was flooded with calls from German men who refused to take directions from a woman. [I am not making this up.]

When Siri first appeared, the app was female voiced in the U.S. But in UK and France the app had a male voice. Current Siri apps offer several voice option choices reflecting gender and regional differences.

Spectrogram of the Sentence “It’s All Greek to Me” spoken by a female voice. By Dvortygirl, Mysid. Creative Commons Attribution. Wikimedia Commons.

Ken Makovsky. “Ever Wonder Why so Many Computer Voices are Female?” Forbes. Nov 3, 2011.