Easter bunnies are an American tradition. So are their eggs. Where would we be without Easter Egg Hunts for the children and chocolate bunnies for their parents?

Like many customs, the concept of Easter bunnies and their colorful eggs is a distinctly odd mixture of European pagan origins and Christian adaptations.

Imagine yourself in a cold, dark German winter. What might you dream about? Most likely it would be warmer, brighter, longer days; spring flowers peeking through the forest floor; animals giving birth, and crops being sown. 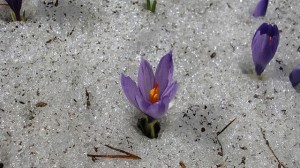 Imagine the hope flowing from the first crocus blossoms peeking through the snow. Years ago in the midst of a Boston winter, I was pretty slaphappy to see those tiny flowers, even though actual spring was a long way off. 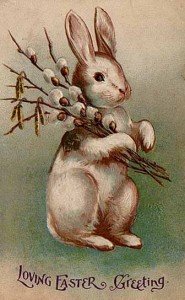 Pre-Christian Germans worshipped the Goddess Eostre and her animal companion, the Hare. She appeared with the Spring Equinox. Goddesses are nice, but spring fertility is more practical. Hares and rabbits aren’t the same species, but they’re both in the Leporidae family. 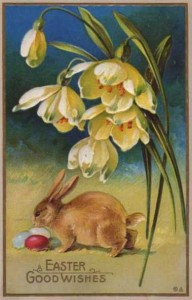 Fast forward to the Christian era. The hare became a popular motif in medieval church art, because people thought hares reproduced without losing their virginity which made them a perfect symbol for the Virgin Mary.

From there it was a short step to the Osterhase, a judgmental hare who ruled on whether children had been good or bad. If the children were good, the hare left them some eggs, which, according to custom, were laid by the hare in her nest. By 1680 the story of a rabbit laying eggs and hiding them in the garden was an annual custom. 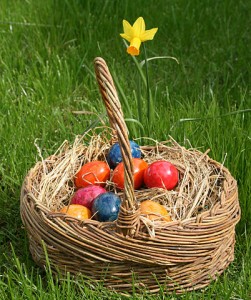 Eggs, by the way, had their own symbolism. Medieval Christians abstained from eggs during Lent, so they were a real Easter treat. And since eggs have a yolk inside, cracking an egg symbolized Jesus breaking out of the tomb.

In the 18th century, German immigrants brought the custom to Pennsylvania. Children began making nests for the bunnies and leaving out carrots in case a snack was needed.

Something to think about as you nibble the ears of your chocolate bunny. 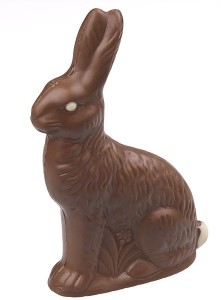 Trace Dominguez. “What does the Easter Bunny have to do with Easter?” Discovery.com. April 19, 2014.

One thoughts on “EGG BUNNIES”