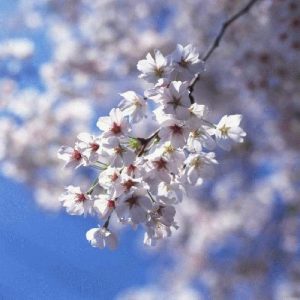 You know it’s March when cherry trees prepare to bloom. It’s also a month of female-oriented events. In the U.S. the entire month carries the label “Women’s History Month.” Go to any library or school campus, and you’ll probably see displays of notable women. Visibility in a good thing, but is it enough?

Wednesday, March 8 is International Women’s Day. I blogged about this last year, and not much has changed for the better. You can see the blog here.

This year I’d like to mention the effect Women’s Day has had on history, because this week also marks the anniversary of the 1917 February Revolution* in Russia. Events ignited on Women’s Day.

The march rose out of severe poverty and deprivation. The price for a one-pound loaf of rye bread rose from three kopeks in 1913 to 18 in 1917. Women worked twelve hours a day in factories and then stood in line to buy bread. The Russians were losing badly against the Germans in World War I. And the winter was brutally cold. In January a police report observed:

“Mothers of families, exhausted by endless standing in line at stores, distraught over their half starving and sick children, are today perhaps closer to revolution than [the liberal opposition leaders] and of course they are a great deal more dangerous because they are the combustible material for which only a single spark is needed to burst into flame.” 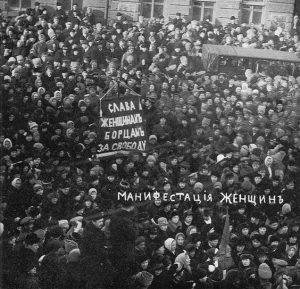 Women united around the issues of bread and peace. On International Women’s Day ten thousand women marched with banners proclaiming: “Down With Autocracy;” “Down With War;” “Our Husbands Must Return from the Front;” “Peace and Bread.” Their call for a General Strike succeeded. The revolution quickly spread to Moscow and other cities.

For many years mainstream Americans shunned the very idea of International Women’s Day as a day observed by Socialists, Communists, and other extreme political activists. During the 1960s feminists revived the day which was recognized by the United Nations in 1975.

A NEW CALL FOR CHANGE

This year’s United Nations Theme is “Women in the Changing World of Work: Planet 50-50 by 2030.” Many women don’t want to wait until 2030 or longer for extreme social change. “Lean-In feminism” for women in corporate America isn’t enough.

A new feminist theme calling for immediate change in social and economic policies is gaining global strength., In the United States organizers of the recent Women’s March on Washington urge women from all walks of life to make March 8 a #DayWithoutAWoman.

Building on the premise that society won’t appreciate women’s many contributions until they are withdrawn, organizers urge women to take a day off from paid and unpaid labor and avoid shopping (with the exception of small women and minority owned businesses.) Not everyone can take a day off. But supporters can wear red in solidarity with other women observing the day. 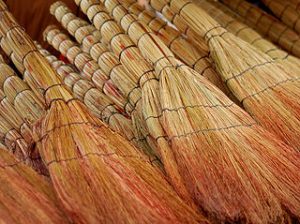 Organizers in the United Kingdom added the broom as a symbol, because together the bristles are strong. This is true, but in my view brooms are too associated with women’s traditional work to symbolize change.

In a separate observance of International Women’s Day the Italian Minister of Cultural Heritage announced Italy will  celebrate the feminine world in art by and of women. Museums will waive admission charges on March 8 to celebrate women from all walks of life.

We’ve touched on art, history, and politics. Now it’s time to mention dolls and a celebration of traditional female attributes. Specifically Girl’s Day observed in Japan on the third day of the third month. It’s past for another year; the dolls have been taken down. I mention Girl’s Day because it represents a charming custom from another time. And I wonder if there’s space in contemporary feminism for such an observance.

Hina Matsuri began in ancient Heian Japan. Straw dolls sat on small boats sent downriver towards the sea to take bad spirits with them. A public expression of a desire to protect daughters. 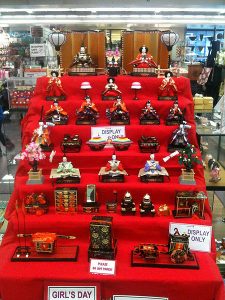 Japanese girls receive elaborate dolls that are displayed on platforms up to seven stories high. Red carpet covers each level. Dolls for the Emperor and Empress preside at the highest level. Attendants and musicians populate lower platforms. Only homes with a daughter can put up the display towards the end of February. It comes down no later than March 4. Depending on family traditions, a display left up too long could bring bad luck, or the dolls might come to life and cause havoc. At the very least, the neighbors will notice.

A complete set of dolls purchased in Japan costs thousands of dollars, but most families pass the dolls through the generations. 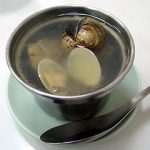 There are, of course, special foods. One of these is Ushiojiru, a clam soup. The clams are left in their shells. The mating of the two halves represents the hope of future romance and harmony for the girls.

It might seem odd to join Girl’s Day Celebrations with International Women’s Day. But it’s important to remember the diversity which unites women and girls around the globe.

The uniting theme of International Women’s Day in 2017 is #BeBoldForChange. A phrase with a different meaning for each of us.

*In 1917 Russia used the Julian Calendar while the West used the Gregorian Calendar, so events occurring in Russia in February are dated elsewhere in March.

Brooms for Sale in a Tbilisi Market by Vladimir Shioshvili. Creative Commons Attribution.

Women’s March. A Day Without Women.