Rotary Club of Hilo Bay staffs Aid Station Number 5 at the annual Volcano Rain Forest Run. Station 5 at the corner of Wright and Amaumau Roads had a slightly funky appearance this year due to the first purple portable toilet I’ve seen. I’m more accustomed to motley green or brown colors. But purple has a certain charm providing an accent to the lush green of the Volcano Rain Forest.

The first person to run – and I mean run – past our station was Billy Barnett in the 30-39 age division who completed the half Marathon in 1:18:41. Katherine O’Neil in the 20-29 division was the first wahine with a time of 1:25:09. But not everyone is built for speed. Participants included all ages and times, with the last finisher coming in 3:57:03.

At the aid station we offered three types of refreshment. Every time a runner approached one or more of us sang out: Water – Electrolytes – Gu (goo). We held out half filled cups that runners could grab on the fly, drink, and toss aside, theoretically without losing stride. But some folks stopped for a brief break before pushing ahead. Some asked where the rubbish bin was. All invariably thanked us. Runners are nice people. As time passed, several folks approached in a slow jog, which was even slower after they passed the turnaround. Everyone seemed to have, if not a good time, at least not an unpleasant one.

After the last participant passed the station about 10:00, we poured out the remaining cups, broke down the tables, and generally “policed” the area. It was time for a field trip to Volcano Winery, owned by Member Marie Bothof and her husband Del.

A Winery on lava at 4,000 feet?! Napa it isn’t. On the contrary, Volcano Winery is a boutique winery producing a unique selection of well-received wines, estate tea, and white figs. (Figs?)

Lynn “Doc” McKinney, a retired veterinarian from O`ahu, started the winery in 1986. He thought the climate at 4,000 feet would be perfect for growing Symphony grapes and planted 14 acres of grape vines. The winery opened its doors to the public in 1993. I heard that Doc McKinney charged $13.00 per bottle of wine. Times and marketing have changed since then.

Del and Marie Bothof purchased the winery in 1999 and have been hard at work at their labor of love ever since. They produce eight delightful varieties of wine – enthusiastically tasted by several Rotarians. The Hawaiian Guava-Grape Wine won a Silver Medal at the Pacific Rim International Wine Competition. I didn’t know guavas and white grapes could get along so well, but they do. Volcano Red, a medium bodied red wine, brought home a Bronze Medal from the 2013 Finger Lakes International Wine Competition. 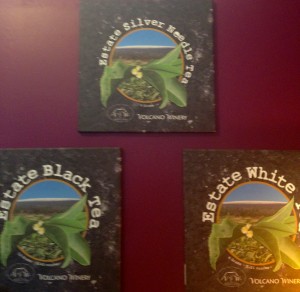 Not fond of wine? Try one of the Three Varieties of Estate Grown Tea. Silver Needle Tea, White Tea, and Black Tea. Silver Needle is the straight leaf at the tippy, tippy top of the plant. White Tea includes the first leaf next to the needle, and Black Tea includes an additional leaf just below. As Del Bothof demonstrated the best tea leaves, I spotted a tea flower, a small white blossom nestled among the leaves. Volcano Winery introduced a product called Infusion made with Hawaiian macadamia nut honey from Kona and the Estate Black Tea. It came home from the Finger Lakes Competition with its own Bronze Medal.

The Bothofs are adding a new product to their repertoire: white figs. I can’t wait until next year to find out what they do with them.