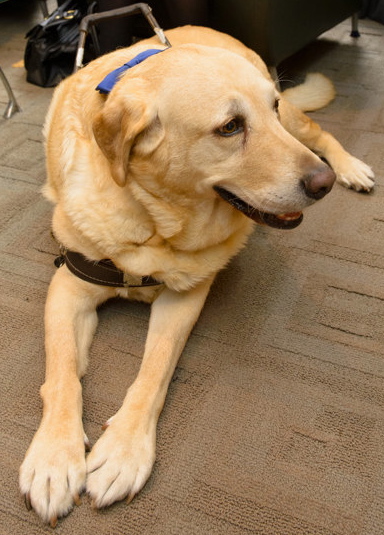 Hello. Guide Dog Spencer McGarrett here. Have you been reading Sandra’s recent blogs? Clearly Writer and Historian are completely out of control. I tried to get Travellor to impose some discipline, but she refused. Probably because she thought she would get the next blog spot. While they were squabbling, I pulled Sandra aside.

“You’re a guide dog.  What do you know about writing a blog?”

“What’s to know?  I’ve watched you for weeks.  You put your paws on the keyboard and away you go.”

Well, she had no answer to that, so here I am.  Guide Dog Spencer McGarrett, puppy blogger.  Check out my picture.  Aren’t I handsome?  I am a yellow Labrador Retriever.  Not that I could ever be bothered to retrieve anything.  Oh, and I’ll tell you right now, I hate water.  People think because I’m a Labrador I like to swim.  Excuse me?  Have you ever smelled a wet dog?  Why would I want to smell like that?

The next thing people ask is why I have so many names.  I am a pure bred Labrador – although I may have an unknown relative somewhere in the gene pool.  Shhh!  Don’t tell anyone!  The way I heard the story, every litter delivered during a calendar year gets a letter.  So there’s an A-litter, B-litter – you get the drift.  I’m from the S-litter at Guide Dogs Victoria (Australia) (https://www.guidedogsvictoria.com.au ) in 2003.  My littermates and I all had names starting with the letter S.  There was Sasha and Sam.  And, I’m Spencer.

Fast forward.  I’ve made it through training and been assigned to the Handsome Bloke who is completely, totally, and entirely blind.  Can’t see his hand in front of his face.  I was so excited, ‘cuz he lives in Hawai`i.  I’d get to see hula dogs.  Wow!

Fully trained internationally certified guide dogs are very expensive.  I’m embarrassed to tell you how much we cost – maybe later when we know each other better.  Even though we are expensive, our handlers don’t pay for us.  We are supported by donations.  In Hawai`i there’s a television show called Hawai`i 5-O.  There’s cops and bad guys, and mostly beautiful scenes from Hawai`i.  The first Hawai`i 5-O starred Jack Lord as Steve McGarrett.  He died before I was born, but his widow Marie lived in Hawai`i and donated to various charities, including Eye of the Pacific Guide Dog Foundation. (http://www.eyeofthepacific.org ) Mrs. Lord’s donation paid for me so I could work with the Handsome Bloke.  The Handsome Bloke was so excited, he changed my name to McGarrett in honor of Jack Lord.  There was a special proclamation from Governor Linda Lingle and Harry Kim, Mayor of Hawai`i County.  I felt like royalty.

I have to stop now.  Sandra told me to keep it under 500 words.  I hope she lets me blog again.  I’ve really enjoyed meeting you.  Woof!