After 3 weeks in Agra, it was time to leave on Saturday. So I took a few last pictures of my host’s upscale, professional neighborhood. Gated homes for doctors and lawyers, a temple, the occasional cow in the common area, and, first seen on the day of departure, donkeys near the improvisational housing across the street. As someone who grew up in an American middle class suburb, I feel blessed to have this disconcerting experience — to learn that what appears to be unsettling may just be part of another pattern.

We were two vehicles going to Delhi. The first carrying our hosts and friends; the second a taxi conveying the Handsome Bloke and I. Precise instructions were given to our driver, but the reality that he did not speak English brought home to me the necessity of learning some Hindi before our next visit. At this point, I find it both rude and impractical that I cannot voice more than five words – which include “water,” “rice,” “yes,” and “no.” Good words to know, but not very useful in conversation. I’ll keep you posted on how the language lessons go — my brain is already worried about overcrowding. 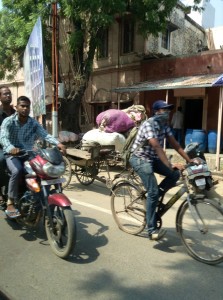 So, off we went into Agra traffic, stopped for “petrol” and meandered until we reached an amazing structure called the Yamuna Expressway – named after the Yamuna River, it is a toll road that connects Agra and the outermost areas of Delhi. It is a new highway with no traffic and no pot holes. Yes, that is correct. For kilometers, the only car was our host’s in front of us, and the occasional motor scooter carrying an entire family of four…or six. Until we came upon a rest area or toll plaza at which point there were more vehicles than one might expect. But they were either faster or slower, because soon the road was ours again.

Then we reached the “end of the road” where the expressway merged with the Delhi highway system. Traffic was back with a vengeance — but more along the lines of a traffic jam on the Los Angeles freeway system. Changing lanes on an American freeway can be a harrowing experience. On the Delhi highway, it seemed impossible, but our driver did it with nonchalance and a loud horn. Slowly we picked our way across town to reach the older “New Delhi” area with India Gate, the military cantonment, diplomatic district, and our destination: The Taj Palace Hotel.

Guarded gates open onto an opulent structure of marble and space. Staffers glide in their saris and suits, and tasteful flower displays accompanied by aromatic scents greet the visitor. Carpets are deep; appointments are immaculate, and traffic horns are replaced by a classical music. I recall Beethoven’s “Ode to Joy” playing as we checked in. A living myth belying the irreverent cacophony just outside the gates. After spending the night in opulent luxury, we left early Sunday morning and boarded our British Airways flight to London.

As we wend our way through the air, I bemusedly try to make some sense of things. Say India to ten people in the west, and they are likely to mention the Taj Mahal, if they have any image at all. The Taj Mahal is a beautiful monument, but it is static. It’s been there for centuries – sometimes visible, other times buried. However, India is not static. She is straining to mix traditional and modernity, Jaguars and ox carts. She is vibrant and bustling, yet without a western sense of time. She is a global society struggling for her place, while still trying to provide adequate sanitation in remote villages. Luxury condominiums stand near tent cities. These contradictions cannot be understood – they simply exist. 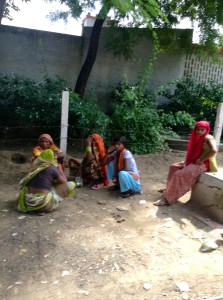 I wonder if we in the west don’t have our own contradictions. Desperate inner cities surrounded by prosperous suburbs. Children living below the poverty level while surrounded by plenty. Something to consider.

What do you think? Leave a comment, if you are so inclined. After I return home and can download my pictures, I’ll post a board on Pinterest. Hope you are enjoying the seasonal change that is October.