Though there are taller buildings now, York Minster continues to tower over the City of York and the entire Yorkshire region. I’m a huge fan of this stone monument and in awe of the lives it has touched – some for the better, others not so much. This last stop on my research trip was pure pleasure. Among the many things that could be said, here are a couple I selected for today. 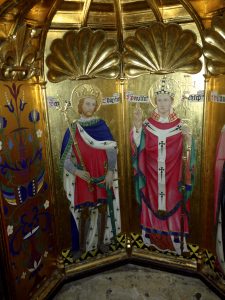 It is said that King Edwin of Northumbria erected a wooden church on this site in 627. When Edwin conquered Northumbria in 616, he decided to marry a Christian Kentish princess. She traveled north with her spiritual advisor, Bishop Paulinus. Eventually, Edwin agreed to be baptized and built the church at York. The scene is reflected in the baptismal cover on the right which is in the crypt. King Edwin is to the left, with Bishop Paulinis on the right. 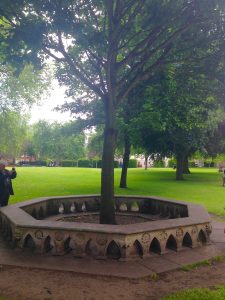 There is some controversy as to where this church was located. Some say it was here, in the spot marked off by benches. At least one other scholar says it was in the same area, but a different spot. Since the building materials have long dissolved, the actual site is impossible to find.

Today York Minster is the largest surviving Gothic cathedral north of the Alps. Construction began about 1230 with completion in 1472. The entire cruciform structure is 524.5 feet long. The nave is 264 feet long, 100 feet wide and a distance from the floor to the vaulted ceiling of 94 feet. The nave was too wide for a stone roof, so wood was used which has made the structure vulnerable to fire. 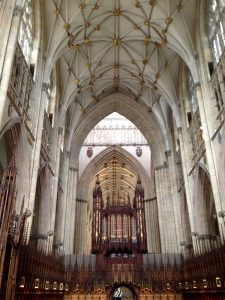 In 1840, fire destroyed the ceiling which was rebuilt. Every decorated boss, the point where the arches intersect, was an exact replica except the one of the Virgin Mary feeding the Baby Jesus. Victorian sensibilities decreed that she would henceforth bottle feed her infant.

The Undercroft is a particularly fascinating area, because the remnants of Roman, Norman and Gothic architecture are all visible. The first building on the Minster’s site was a Roman Army headquarters constructed in 71 CE. It sat at a 45 degree angle to the present Minster structure. It was here that Roman legions declared Constantine to be the new Roman emperor in 306. 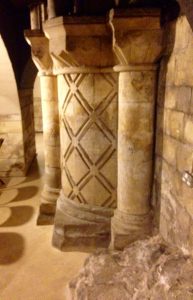 In 1080 Archbishop Thomas of Bayeux began building a stone cathedral on the site. Foundations and masonry with their distinctive Norman designs are still present.

Though the pillars look strong, they were erected on soft soil. Between 1967 and 1972 what was called the Great Dig took place to shore up foundations underneath the Central Tower. Concrete pillars and rods now provide a firm foundation, and in order to prevent harmful vibrations, traffic is no longer allowed in the Minster area. 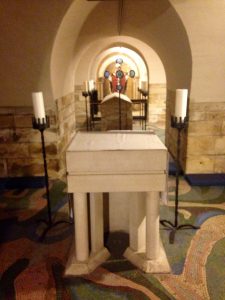 There are two crypts in the Undercroft. 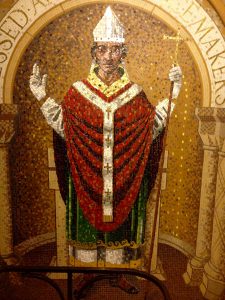 The western crypt contains the modern shrine to St. William of York (d.1154). St William in mosaic splendor presides. Moving forward is the reused Roman coffin containing his remains. The last area is the chapel itself.

Legend has it that St. William died of poison that was administered in the chalice at mass. Within a few months, miracles were attributed to his intervention. In 1227 Pope Honorius III canonized William. 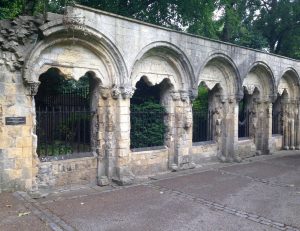 This wall is all that remains from what was once the Archbishop’s Palace. During the nineteenth century, buildings near the Minster were cleared away to create Dean’s Park.

There is much more to say about York Minster, but I’ll leave it for another time. York was the last stop on my research trip. From here I was homeward bound.