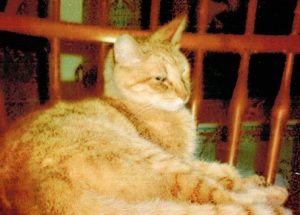 Cats, readers, and writers just seem to go together. Before Big Box Bookstores and long before Amazon, cats used to be frequent residents in independent bookstores. Alas, the opportunity to scratch kitty ears at the cash register is gone, but readers still cuddle up with cats, as do writers.

MARK TWAIN, American humorist, was particularly fond of cats. One true story relates to Twain, his daughter, and her black cat named Bambino. One day, Bambino went exploring and failed to return. Twain took out a newspaper advertisement in the New York American and offered a five dollar reward for Bambino’s safe return. Twain described Bambino as “Large and intensely black; thick, velvety fur; has a faint fringe of white hair across his chest; not easy to find in ordinary light.”

People, hoping to see the famous author, came to his door with cats. All to no avail until Bambino was found across the street. Twain took out another advertisement saying the cat was found, but people still came. 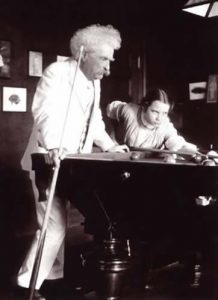 Besides cats, Mark Twain enjoyed pocket billiard. He put a kitten in the corner pocket so he could watch it play as the balls passed by. I’m pretty sure no balls were allowed to land in the kitten’s pocket. This photo shows Twain playing a game with Louisa Paine.

“If a man could be crossed with a cat, it would improve the man but deteriorate the cat.”

“When a man loves cats, I am his friend and comrade without further introduction.”

“I simply can’t resist a cat, particularly a purring one. They are the cleanest, cunningest, and most intelligent things I know – outside of a girl you love, of course.”

As contemporary dystopian author REBECCA CLARE SMITH observes, cats are the best writing partners, because they don’t care how many words you put down, and they listen to your rants without complaint or interest. 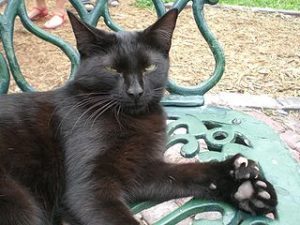 ERNEST HEMINGWAY noted that “a cat has absolute emotional honesty.” His Hemingway Cats at The Hemingway House in Key West, Florida are unique. A ship’s captain gave Hemingway a six-toed cat. (Official name: polydactyl) Hemingway called the cat Snowball (though some say he named it Snow White). Anyway, Hemingway let it roam. Today up to fifty of Snowball’s descendants continue to live on the property. As Hemingway said, “One cat just leads to another.”

Canadian novelist ROBERTSON DAVIES explains, “Authors like cats because they are such quiet, lovable, wise creatures, and cats like authors for the same reasons.”

Perhaps the most famous aficionado of cats is T. S. ELLIOT whose Old Possum’s Book of Practical Cats (1939) inspired the musical “Cats.” One of the better known poems is The Naming of Cats, “a difficult matter.” Set for the stage, the poem introduces Cats, the musical.

I start my writing time by reading with Koa Kat by my side. When I go to the computer, she settles down in my reading seat, which may have been her plan all along, and goes promptly to sleep.

She gets up about five hours later and begins curling around my legs. She knows treats are served downstairs, and she doesn’t want to be late. I can write without her presence, but it’s a more isolated activity.

Photo of yellow cat by author.

Sam Kalda.”Famous Writers and Their Feline Friends.” Read It Forward