This is the last installment of my “Cruise Adventures in Alaska” series. And, I must say, from my perspective these events were the best of all.

After leaving Homer on Alaska’s Kenai Peninsula, we cruised across Shelikof Strait to Kodiak Island (Kodak city population 6,130). Kodiak is the second largest island in the U.S. (The Big Island of Hawai`i is the largest.) and is particularly known for the Kodiak Bear, also known as the Kodiak Brown Bear and/or the Alaska Grizzly Bear. The Kodiak Bear is a sub-species of the Brown Bear, and one of the two largest varieties of bear (the other being the polar bear). A male Kodiak bear weighs between 800 and 1400 pounds. That’s a lot of bear!

My Kodiak adventure was at sea aboard the U Rascal, one of the sport fishing boats operated by family owned Kodiak Island Charters. Not many cruise ships go to Kodiak, so there isn’t much in the way of “tourist” boats. The U Rascal is closer to the water line, well equipped with fishing equipment and surprisingly clean. Complete with a marine toilet.

From the pier at Kodiak, our destination was Long Island with the hope of seeing marine wildlife. We saw the first animals before we left the harbor area – a large mass of Steller Sea Lions. Adult males reach a body weight of 1,245 pounds with a length of almost 11 feet. The story is that at one time the sea lions swam into the boat harbor, causing some disruption to normal traffic, So the harbormaster arranged for left over materials to be used to create a “haul-out” for them.

As we headed into open water, we saw lots of marine wildlife, including a natural sea lion haul-out, smaller harbor seals, and sea otters. Long Island is famous for its bird rookery featuring both tufted and horned puffins.

So far, so good. But then the amazing, magical moment arrived. The U Rascal headed out to an area where whales had been spotted the day before. And then, there they were, not just in the distance but swimming near and around the boat – at least 20. They were surface swimming and though they “blew” and the humpbacks waved the occasional fin, there was no breaching or diving. But it didn’t matter to me. It was such a thrill to be in a small boat so close to them.

These whales follow a migratory pattern in which they feed in the waters off Alaska during the summer months, and then spend their winters in waters off Hawai`i where they mate and give birth. I’ve never participated in whale watching in Hawai`i, possibly due to what I call “home town inertia.” But having such a special experience in Alaska makes me glad I waited. The cooler weather, calm water (at least that day), uncluttered water area, and presence of other sea animals made the experience a once-in-a-lifetime event. Sorry to say, I don’t have any pictures. I had to make a choice: fool around with the camera and perhaps have nothing to show for it, or be present for as long as the moment lasted. I think I made the right choice. Some things are meant to live in our hearts, not our photo collections.

After so much excitement, I was glad we spent the next day cruising across the Gulf of Alaska to Hubbard Glacier, America’s largest tidewater glacier. It’s 76 miles long, 7 miles wide and 600 feet tall. Two hundred fifty feet of that height is below the water line. For the last 100 years, Hubbard Glacier has been advancing at a rate of about 80 feet per year. One more interesting factoid: the ice at its face is about 450 years old and in some spots over 2000 feet thick.

The approach is eerie in its silence, except for ice cracking, the peaceful look of the water, and the sensation of timelessness. Another opportunity to realize the vastness of nature in comparison to human existence.

Sitka on Baranof Island (population 8,881) was first settled by the Kiksadi Clan of the Tlingit people. In 1799 the Russian territorial governor, Alexander Baranof, moved the hunt for sea otters from Kodiak to Sitka. Within sixty years, the sea otters were almost extinct.

One of the unique aspects about life in Sitka is that the island can only be accessed by boat or airplane. There’s no highway link with the mainland. There are fourteen miles of road on the island with cars brought in via the Alaska Marine Highway Ferry system. People use the same ferries to travel to Juneau or Ketchikan.

For my last excursion, I elected to see as many animals as possible on land and sea. I booked a five hour tour called “Otters, Raptors, and Bears – Oh My!” I mean, how could you resist an excursion with a name like that? The cruise, organized by Allen Marine Tours, used a very nice catamaran. I got to see marine mammals that had become familiar over the previous week: a raft of sea otters, bald eagles, harbor seals, various sea birds, and more whales. But the best was yet to come.

The land tour began with a visit to the Alaska Raptor Center, 17 acres dedicated to the rehabilitation of up to 200 injured raptors each year. One especially fascinating part of the rehabilitation process is the Bald Eagle Flight Training Center. The center provides flight conditioning space for bald eagles – viewing windows allow visitors to see the birds soar, swoop, and preen.

Some birds, for various reasons, can’t be released back into the wild. They take on a different role as “Raptors-in-Residence.” Sitka is a residential bird, and I sat about five feet away from her.

It was what we in Hawai`i call a “chicken skin” experience. Trivia factoid: As we know, Bald Eagles aren’t actually bald. They have white feathers on their heads and necks. At the time they received their name, the word bald meant light hair as well as no hair.

There was one more unique activity left on my Sitka itinerary – a visit to Fortress of the Bear, a safe haven for orphan bear cubs

I immediately noticed Feeding Instructions from the Bear Keepers: 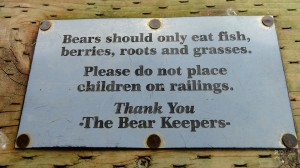 “Bears should only eat fish, berries, roots and grasses. Please do not place children on the railings. Thank you.” 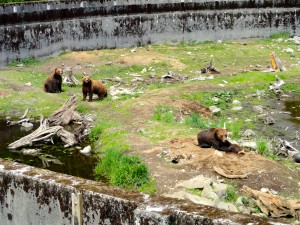 There are three confined areas for the bears. The first space features three brown bears: Toby, Balloo, and Lucky. 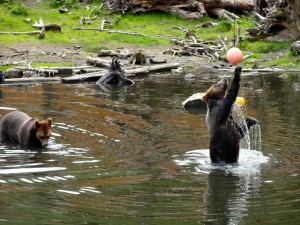 And there are three black bear cubs: Smokey, Bandit, and Tuliaan. 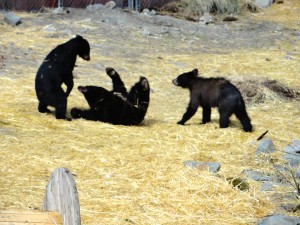 Alaska law doesn’t allow the release of bears back into the wild, so it’s hard to say if the facility will be able to rescue more bear cubs. But these eight bears are doing just fine.

Thank you for sharing these memories with me.

I hope you’re inspired to take your own trip to Alaska.

Photos by Author – All Rights Reserved

If you missed the first two Alaska blogs, you can still access ‘Tales from Alaska” and “An Alaskan Journey”.  See you next week!

One thoughts on “WHALES, RAPTORS, & BEARS”