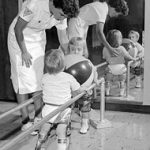 Once polio ranked as one of the most feared diseases in the United States. Today most Americans don’t give the disease a second thought.

The first recorded polio outbreak in the United States was in 1894 when Vermont reported 132 cases. In 1916, 27,000 cases in New York City resulted in 6,000 deaths. Researchers began looking for the cause of the incurable disease and for ways to treat it.

Polio is a wild virus that spreads through contaminated food and water, and can only reproduce inside humans. Polio affects a type of cell in the spinal column. When the cells die, the brain can’t send messages to affected muscles which wither from disuse. If the affected area is the chest or diaphragm, the patient can’t breathe. 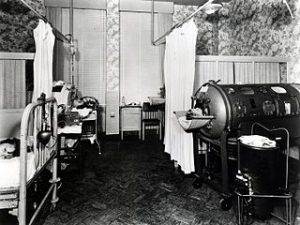 In 1927 the first Tank Respirators, generally called Iron Lungs, appeared to maintain respiration until the patient could breathe independently. Hospitals had Tank Respirator wards for those affected. In 1959, 1,200 Americans relied on Iron Lungs.

In 1938 President Franklin Roosevelt, himself a polio victim, founded the National Foundation of Infantile Paralysis, which led to the March of Dimes campaign to raise money for research. HIs successor, Harry Truman, declared the war on polio must be nation wide. “It must be total war in every city, town and village throughout the land.”

VACCINES ERADICATE POLIO IN U. S. 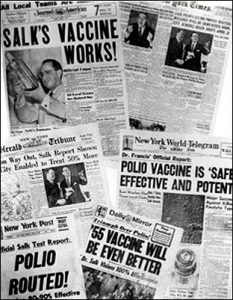 I’m old enough to remember when my elementary school nurse inoculated every student in every class. While most of us calmly waited our turn, one boy flat-out refused to participate. We stood transfixed as he threw an amazing tantrum. Eventually, a teacher removed him from the line.

I also remember the Sabin Vaccine administered at what I believe was the local public park. The pink vaccine was administered in a sugar cube. No one seemed distressed by the process. 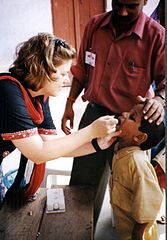 Rotary International has participated in the fight against polio since 1985. Rotary raises funds, but more than that, Rotarians throughout the world provide the facilities and public health workers to distribute the Sabin vaccine. Two drops in a child’s mouth provides immunity.

In 1988, there were 350,000 reported cases of polio world wide. The disease paralyzed over 1,000 children. Since then 2.5 billion children have been immunized with the cooperation of over two hundred countries, 20 million volunteers, and international contributions of over US$ 11 billion.

In July 2017 the number of polio cases worldwide was eight. The global incidence of polio is down 99 percent. The disease remains endemic in three countries: Pakistan, Afghanistan, and Nigeria. Polio’s continued existence anywhere is a threat everywhere.

This year the Bill and Melinda Gates Foundation hosts the annual World Polio Day event at their Seattle campus. You can watch the event live on October 24th at 2:30 Pacific Daylight Time. [21:30 GMT]

Illustrations from Wikimedia Commons and in the public domain.

Iron Lung and Other Equipment.