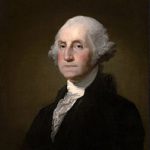 Presidents’ Day is meant to honor all American presidents, but if any president comes to mind, it’s usually George Washington. A self-made gentleman, Washington became a consummate politician. Commander of the Continental Army. Chair of the Constitutional Congress. First President of the United States. He had his detractors, but most Americans saw the Virginian as the sole symbol of National Unity at a time when political “factions” split the country between Federalists who supported a strong central government and Anti-Federalists, who called themselves Democratic-Republicans. Men who believed government should be closest to the people, and worried Washington would be honored with the trappings of a king.

Washington died in 1799. In 1800 Thomas Jefferson, author of the Declaration of Independence, became the third president of the United States. With the Democratic-Republicans in office, there would be no monument.

Many Americans wanted a permanent remembrance, and in 1833 private citizens formed the Washington National Monument Society. The winning concept wasn’t a general on horseback or a statesman. It was an obelisk, a structure first built in Egypt. Supporters thought an obelisk conveyed a sense of timelessness, as well as respect and gratitude for our first national leader. 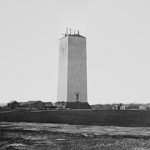 It was supposed to be a 600-foot obelisk surrounded by thirty 100-foot columns. Construction began in 1848. Six years later, the marble obelisk reached a height of 156 feet and stopped. The Monument Society was bankrupt. With the nation on the verge of civil war, a monument to George Washington, a man who evoked national unity, didn’t seem very important.

More than a monument, people needed a sense of Washington himself. In 1862, citizens in Philadelphia petitioned Congress to read Washington’s Farewell Address to a joint session of Congress on Washington’s birthday. They thought a public reading would boost morale during a time of civil war. As Senators filed into the House chamber, they passed captured Confederate battle flags, a sight that undoubtedly did boost their morale.

Among the subjects Washington addressed was the issue of “party,” or “factionalism” as it existed in 1797. Perhaps Philadelphians sought to make a point.

Washington observed that “the common and continual mischiefs of the spirit of party are sufficient to make it the interest and duty of a wise people to discourage and restrain it. It serves always to distract the Public Councils, and enfeeble the Public Administration. It agitates the Community with ill-founded jealousies and false alarms; kindles the animosity of one part against another, foments occasionally riot and insurrection. It opens the door to foreign influences and corruption, which find a facilitated access to the government itself through the channels of party passions. Thus the policy and will of one country are subjected to the policy and will of another.” [Washington’s Farewell Address. 23, 24]

The custom of reading Washington’s Farewell Address on Presidents’ Day continues, though the reading isn’t well-attended any more and no longer lifts national morale. 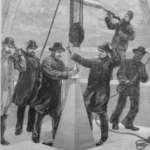 In 1876 the civil war was over, the transcontinental railroad completed, and business was booming. Congress decided to complete Washington’s Monument and brought in the Army Corps of Engineers to do the job. Gone were the surrounding columns and decorative touches. The monument would be a stark obelisk, less expensive and quicker to build. In 1884 the 3300 pound capstone with an aluminum apex just above it completed the construction of what has become a national symbol.

The Washington Monument is 554 feet tall. It was the tallest structure in the world until 1889 and is still the world’s tallest obelisk. 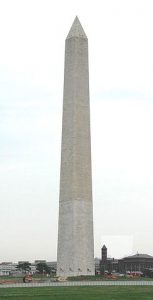 The monument is an impressive piece of architecture. Thomas Jefferson would have been appalled to realize this edifice is named for a mere mortal, no matter how much service he gave to his country. On the other hand, Jefferson might have felt differently if he’d known about the Jefferson Memorial dedicated in 1943.

“Associate with men of good quality if you esteem your own reputation; for it is better to be alone than in bad company.”

“Government is not reason; it is not eloquence; it is force! Like fire, it is a dangerous servant, and a fearful master.”