Visiting the Royal Yacht Britannia was the major highlight of my visit to Scotland. Part royal country house, part diplomatic symbol, Britannia served the Royal Family for over 40 years, sailing a million miles on her journeys around the world.

Britannia replaced the Royal Yacht Victoria & Albert II, decommissioned in 1939, and is the only royal yacht to have a seagoing capacity and be specifically designed as both a royal residence and venue for entertaining up to 60 guests at state dinners. 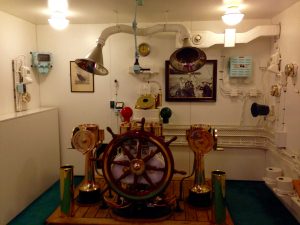 At left is the Wheelhouse. It was originally located on the deck below the bridge, considered to be a safer location in case of any attack. The Wheelhouse normally had three men – one to steer and two to operate telegraphs on either side of the wheel. The telegraphs were linked to the Engine Room, five decks below.

At full capacity Britannia can carry 600 passengers. There are a few special design features in keeping with Britannia’s special role. For example, the royal observation decks are designed so gusts of wind vent downward to avoid blowing up royal skirts. 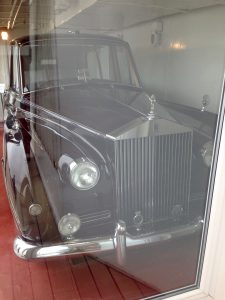 When the queen was making a state visit, she took along her Rolls Royce Phantom V or similar vehicle, housed in a special garage.

Queen Elizabeth launched her new yacht on April 16, 1953 with a bottle of Empire wine. During post-World War II British austerity, champagne was thought to be too extravagant. In January 1954, Britannia was commissioned into the Royal Navy. During time of war, she could serve as a hospital ship, and her crew was composed of naval sailors and marines. 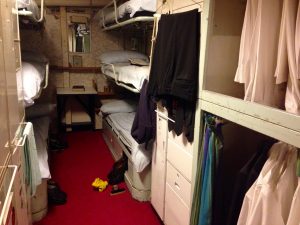 The commander was always an Admiral who oversaw 21 officers and 256 yachtsmen, called yotties. When members of the Royal family were aboard, a platoon of Royal Marines deployed. And, of course, there was a band with a director and 26 musicians. The band practiced daily, but had to do so without making noise. Nothing was allowed to disturb the passengers’ desire for silence and relaxation. Crew members wore shoes with rubber soles and used hand signals so they could do their jobs quietly. 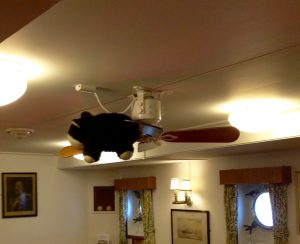 It seems the officers in the wardroom liked to play some sort of game with a stuffed wombat. I’m not sure of the rules, but I suspect the creature was often ‘flying high.’

Queen Elizabeth called Britannia the only place where she could truly relax. 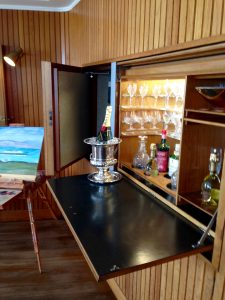 And one of the places the Royal Family and guests liked to relax was in the bar. The painting on the left was done by Prince Philip.

The informality of this area was in direct contrast to the more formal main drawing room. 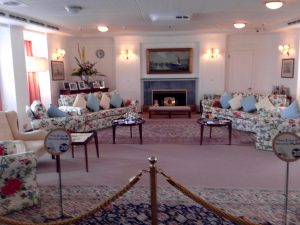 It cost the Royal Navy £11 million pounds annually to operate Britannia. In 1994 Conservative party leader John Major announced that the next time the Britannia was due for an overhaul, she would be decommissioned. It was a time of economic recession, and in an age of air travel, a royal yacht seemed both redundant and extravagant.

The Conservatives reconsidered and in 1997 announced they would built a new yacht. But it was too late. Labour took over the government, and Britannia’s decommissioning took place in December 1997. The event marked the first time Queen Elizabeth shed a tear in public. 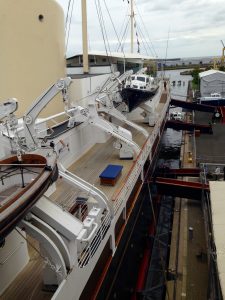 Royal Yacht Britannia did not share the fate of her predecessor which was broken up for scrap. Britannia relocated to Edinburgh’s port city of Leith, and since 1998 has been open to the public. 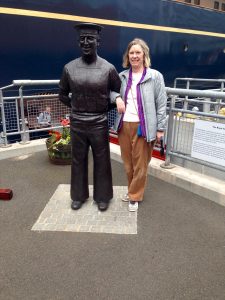 Yes, that’s me and my nautical companion. He wasn’t the least bit flexible.

“Honeymoons and Diplomacy on the Royal Yacht Britannia.” British Heritage.