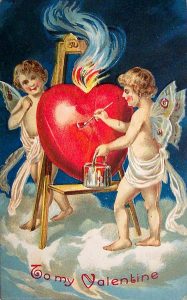 Did you notice? Before Holiday Decorations came down, Valentine’s Day cards were out. Once again a commemorative day many dread is upon us. It wasn’t always so.

St. Valentine of Rome didn’t give flowers, candy, or cards. He gave soldiers the marriage sacrament. Claudius II declared soldiers couldn’t marry. He thought it reduced their fighting effectiveness. Valentine was also a Christian priest, at a time when Christians were persecuted.

Valentine soon found himself in prison. While awaiting his execution, Valentine healed Asterius, his jailor’s daughter. The night before he died in 269 BCE, Valentine wrote Asterius a letter, signing it “Your Valentine,” an act of love if not romance.

As a martyr of the early church, Valentine attained sainthood and is said to look after beekeepers, epileptics, travelers, engaged couples and happy marriages.

But Romance? That attribute entered February when Geoffrey Chaucer wrote that February 14, Valentine’s Saint Day, was the day birds and people find their mates. In his Parliament of Foules, composed in 1382, Chaucer wrote: “For this was on sent Volantynys day / when every foul cometh ther to chese his make.” 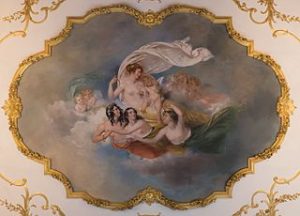 Valentine’s Cards became extremely popular in Victorian England, especially after 1840 when the Penny Post was introduced. Anyone could send a card for a penny, and postmen must have thought everyone did. In the days leading up to February 14th, postal carriers received a refreshment allowance to compensate for their longer days. 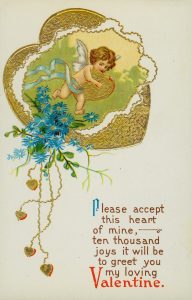 Prior to 1810, most Valentines were made by the giver. As printing advanced and delivery prices dropped, commercial Valentines appeared, though many continued to make their own cards with materials from a stationer’s shop. Victorians displayed their cards and later kept them in scrapbooks. Looking through the books was a popular evening pastime. 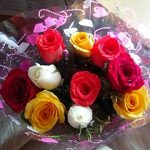 A bouquet of red roses remains a popular Valentine’s Day present. A red rose means “I love you.” Lilacs, on the other hand, refer to the first flush of love.

But don’t give your love yellow roses — they symbolize infidelity.

‘Please Accept this Heart of Mine,’ Public Domain.