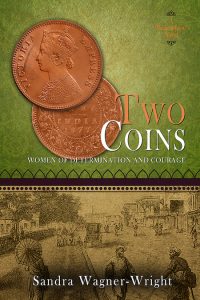 Last week I shared the places associated with Two Coins: A Biographical Novel. This week I’m introducing some of the people who grace its pages. With one exception, my selection is limited to characters with a visual record.

Two Coins focuses on the libel case Mary Pigot filed against The Reverend William Hastie. Though I searched everywhere I could think of, I found no likeness of Miss Pigot. A contemporary newspaper description of the plaintiff and defendant at the 1883 trial gives some idea of Miss Pigot’s appearance.

“Miss Pigot is a lady-like looking Eurasian, not giving one the impression from her looks of anything but strict propriety; indeed, with the profoundest respect to the lady, it seems difficult to conceive of any man conducting himself towards so respectable and rather interesting a person otherwise than with rigid decorum; Miss Pigot’s appearance would certainly not be denominated attractive by a romance writer.”

William Hastie, on the other hand, presented the newspaper reporter with a very different visage. “The defendant, the Rev. W. Hastie, is a hard-featured, canny-looking north countryman, wearing a close dark beard, moustache, [sic] and whiskers. He and the plaintiff impress one as being of about the same (anything but frivolous) age, say, 40 to 42.” 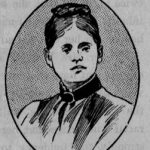 Mrs. Monomohini Wheeler, Inspectress of Girls’ Schools and Zenanas in Bengal, presents an appearance not unlike what I’m sure Miss Pigot adopted. The dress is plain; the hair, severe. Mrs. Wheeler testified on behalf of Reverend Hastie, supporting the defense that Miss Pigot failed in her duties to properly manage the Female 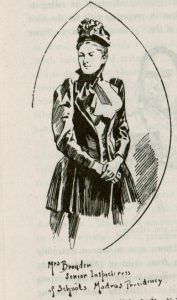 Orphanage. The illustration of a Mrs. Branden, Senior Inspectress of Schools in Madras, gives further insight into the fashion style of women involved in education.

The Reverend Bipro Churn Chuckerbutty was a prominent convert and minister of the Church of Scotland mission in Kolkata. Records indicate that Rev. Chuckerbutty was born in 1823, and may have been the last Hindu boy to light a funeral pyre for his mother. He received Christian baptism in 1843 and went on to a career in the church. Churckerbutty received ordination in 1872 and raised funds to build the Bengali church in 1875. In the aftermath of the case of Pigot v. Hastie, Reverend Chuckerbutty retired in some disgrace.

Missionaries operated in their own structural context, not that of British Civil Servants. These illustrations give some indication of what Miss Pigot’s students may have looked like. 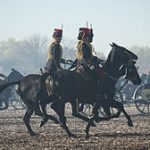 Lieutenant-Colonel R. Alexander Walker was a member of the Royal Artillery at Dum Dum, near Kolkata. He was a close friend of Rev. Hastie, an enemy of Miss Pigot, and a prominent member of St. Andrew’s Kirk and the Scottish missionary community. His wife, Mrs. Amber Walker, and sister-in-law Miss Georgiana Smail played significant roles in gathering the charges made against Miss Pigot. I don’t have a picture of Lt. Col. Walker, but provide this one to demonstrate the type of culture he upheld. The social gap between a lieutenant-colonel in the Royal Artillery and an unmarried Eurasian professional woman working for the Scottish mission was insurmountable. 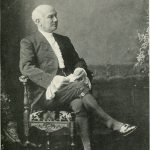 Dr. Archibald Scott was, among many other posts, the convener of the Foreign Mission Committee of the Church of Scotland. From his position in Edinburgh he greatly influenced the fate of everyone connected to the case of Pigot v. Hastie.

Other images in public domain.