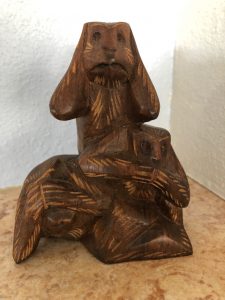 As we settle into the new year, it’s as good a time as any to reflect on old and new wisdom. [The new wisdom is like the old, but with more directions.]

This wooden depiction of the Three Monkeys sat on the bookshelf in my parents’ house. Presently, it’s on my fireplace mantle. It reminds us of an ancient story said to originate with Confucius’ Analects.

Once upon a time, the gods sent three creatures in the form of monkeys to testify about humanity’s ability to perform deeds which were good or evil. Here are two versions of the story.

In this simpler version, Kikazaru covers his ears and watches everyone. If Kikazaru sees someone committing bad deeds, he uses his voice to report the incident to Mizaru, the monkey who covers his eyes.

Mizaru transmits the messages to the Iwazaru, the monkey who covers his mouth.

Iwazru decides which punishment should happen to the wrongdoer.

Of course, there is more to the story. Kikazaru advises us to cover our ears before hearing information that disrupts our inner harmony. In particular, we shouldn’t listen to anything that could cause us to behave badly. 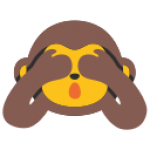 Mizaru advises that we close our eyes to things that aren’t useful or good, and that we punish what is wrong in order to support things that are good. 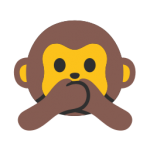 Iwazaru covers his mouth, because we don’t need to transmit anything that isn’t true, good, or useful. 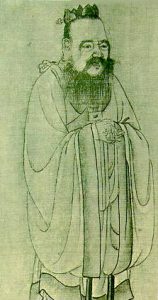 We, of course, live in an individualistic society where we each seek self-fulfillment, and self-help philosophies. One of these is the Four Agreements based on a book by Don Miguel Ruiz. The book is short and purports to share ancient Toltec wisdom.The Four Agreements: A Practical Guide to Personal Freedom is part of a series which has sold over 10 million copies in the United States and been translated into 40 languages.

Ruiz suggests that we each have an internalized script we learned as children in order to please our parents and other authority figures. Many of these unconscious thoughts are irrational and limit our abilities. To be free, we must replace the irrational thoughts with healthy ones. We do this by making four new agreements with ourselves. So far, so logical. 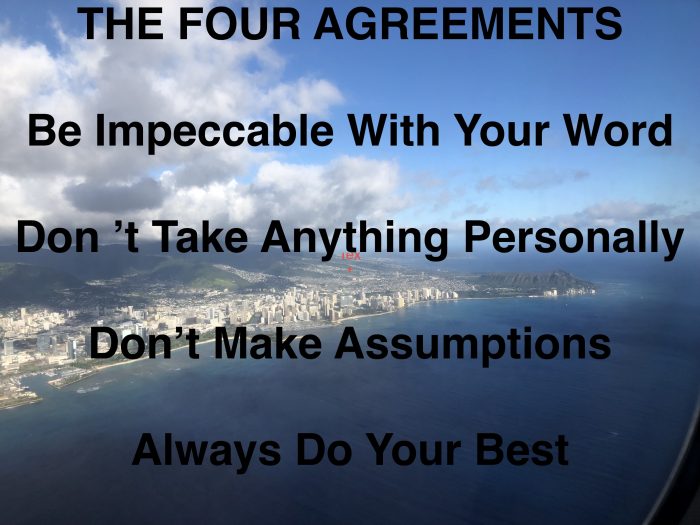 Nice slogan, what does it mean?

First, when you speak, say only what you mean and avoid saying anything negative about yourself or others.

Second, don’t take anything personally. If you don’t care what others think of you or say about you, their opinions don’t matter. Their actions reflect on themselves, not you. Don’t become angry.

Next, don’t make assumptions. You could be wrong. Ask questions instead. Communicate clearly, and see points one and two.

Finally, always do your best. No more. No less. This allows you to live in the moment and be patient with yourself.

But wait. Are the Four Agreements the solution?

Not according to Gabriel Gonsalves, a HeartMath [sic] Coach. [No, I didn’t know about the field either.] Gonsalves practiced the Four Agreements until he realized that what liberates us one day, can limit us the next. That our “best” changes from day to day. And that if we don’t take anything personally, we may miss important feedback from people who care about us.

1. Some things should be taken personally.

If someone who cares about you says something, talk about it.

2. Don’t just be responsible for your words.

Be responsible for your thoughts, feelings, emotions, and actions.

This carving of the Three Wise Monkeys by the 17th century sculptor Hidar Jingoro is one of eight panels at the Tōshōgū Shrine, in Nikkō, Japan. The message is simple and easy to practice.

Do not listen to what will lead you to do wrong.

Do not see bad behavior as natural.

Do not speak badly without reason.

If we could all achieve these life-goals, perhaps everyone could live in greater harmony.

Photo of the Three Monkeys by Author.

Emojis from the Noto Project, released under Apache license.

Illustration of Four Agreements by Author.

“The Lesson of the Three Wise Monkeys at the Tōshōgū Sanctuary.” exploringyourmind.com Feb. 1, 2018.

Gabriel Gondsalves. “The Four Agreements and Why You Should Take Things Personally.” heartintelligencecoach.com. Oct. 11, 2016.