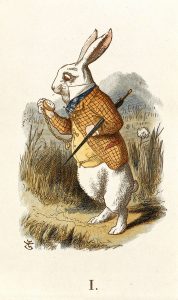 “The hurrier I go, the behinder I get.”

Poor White Rabbit. He was under such stress, always looking at his watch and fretting.

And we do exactly the same. Over-scheduling. Multi-Tasking. Running from here to there and back again. Texting while walking. Listening to podcasts while jogging. Fidgeting while waiting in the spa Quiet Room.

We are the White Rabbit.

The holidays are over. The temperature is cold. The mornings are dark. Seems like we should hunker down with a good book and a cup of tea instead of telecommuting with a mug of cold coffee beside us. No wonder we dream of escape — the Travel + Leisure magazine on my coffee table recommends I flee to “Island Escapes” in warm locations, among them Hawai`i, The Seychelles, and the British Virgin Islands. Sound good? Of course, except …

There are escapes closer to home. 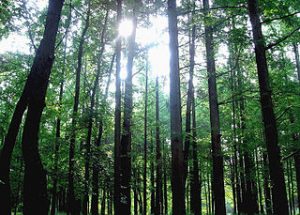 Have you noticed the growing popularity of Forest Bathing?

In Japan the practice is called shinrin-yoku, and is credited with reducing stress, anxiety, depression and anger. Forest Bathing occurs in a device-free zone. No multi-tasking allowed. Just find a spot in the forest, or park, or any open space. Be fully present. Breathe the fresh air. Listen for sounds like bird song or children playing. Feel a tree trunk. Let your mind wander. And slow down.

Is it too cold to sit outside? Try taking a slow morning. Sounds like an oxymoron. The trick is to rise before the day begins, without any specific task in mind. This seems counterproductive. All I want to do on a cold, dark morning is pull the blankets over my head. But if you decide to try it, you can put off starting the morning until the sun rises. The idea is to take time in the morning to set up a day that is balanced, not stressed by rushing and multi-tasking.

According to the World Institute of Slowness, taking time to forget time feeds creativity which could make you more focused and efficient when you start your “official” day. 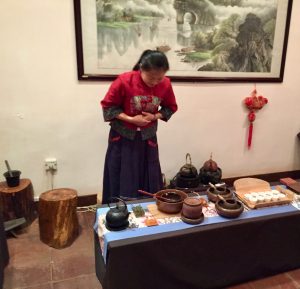 As is often the case, arguments in favor of slowing time by single-tasking are not new. For example, tea ceremonies in China and Japan have ancient properties for meditation and relaxation. And even today, relaxing with a cup of tea several time a day has been shown to reduce stress levels.

As Confucius pointed out, “It does not matter how slowly you go as long as you do not stop.” 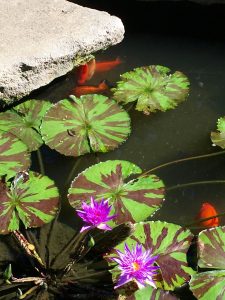 We’ll all get where we’re going eventually.

Photo of Tea Ceremony by Author.

Quotation given to the White Rabbit from Alice’s Adventure’s in Wonderland by Lewis Carrol.

2 thoughts on “The White Rabbit Needs a Cup of Tea”