Fall is upon us – time for colorful autumn leaves and other fruits of the season. Apples and pumpkins with their golden colors come to mind. The days are still long and the nights a bit crisp. Halloween candy is in the stores. But let’s go back to apples.

Apples have been part of American folklore almost as long as Washington Irving’s “headless horseman.” And the name once most closely associated with apples was Johnny Appleseed. I’m not sure when this peripatetic planter entered American folklore but Walk Disney made him popular in a 1949 animated film called Melody Time. Walt failed to mention that Johnny’s apples weren’t for eating. They were for making hard cider. And Johnny wasn’t as generous as he first appears. 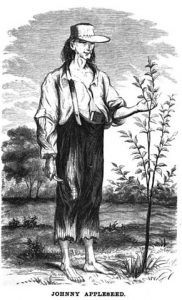 His real name was John Chapman, and he was born in 1774 – two years before the American colonies decided to separate from Great Britain. His father was a farmer who served in the Revolutionary Army.

Legend says that the reason Johnny planted so many apple trees was so everyone could have an apple and never go hungry. At least not during the harvest.

In fact, John left home when he was eighteen and headed west. The Ohio Company of Associates encouraged land speculation with an interesting offer. Anyone willing to form a permanent homestead in the wilderness west of Ohio’s first permanent settlement would be granted 100 acres of land. That’s a lot of free land. To prove permanent settlement, a man had to plant 50 apple trees and 20 peach trees over the course of three years. John recognized the knock of opportunity.

Johnny, as he was becoming known, carried a leather bag filled with apple seeds which were free from cider mills. The eventual trees produced apples known as “spitters.” They were small and tart – not good for eating at all. But they were far more valuable, because they were the apples used to make hard apple cider. Water could and did make people sick. Hard cider was safe and tasty. People drank about 10.52 ounces daily. 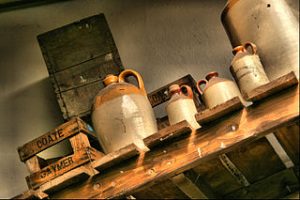 Johnny wasn’t interested in making cider. He created nursery orchards by selecting good planting spot; fencing it with whatever he could find; sowing his seeds and moving on. He returned periodically to repair the fences and sell his trees. Johnny’s reputation grew. He became known as the Apple Seed Man, and then Johnny Appleseed.

Johnny sold land as well as trees. Over time he accumulated a great deal of money, but he didn’t put it in a bank. Few people did. Johnny buried it. When he died, Johnny still owned over 1200 acres. Don’t know what happened to the money. 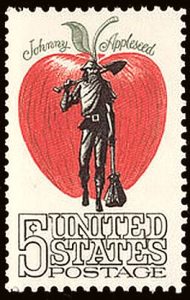 Fast forward to prohibition in the 1920s. Federal agents knew Johnny’s apples were for making hard cider, and they had enough trouble keeping up with the whiskey stills. Agents destroyed the orchards. So, in a way, the Disney movie rehabilitated an American eccentric. And in 1966 Johnny Appleseed had his very own 5 cent postage stamp. True celebrity at last.

The Story of Johnny Appleseed