RUT:
Definition: Habit of behavior that has become dull and unproductive, but is hard to change.
Example: “You’re in a rut.” No one ever says: “You’re in a routine.”

In fact, the word rut is almost never said with a positive connotation unless we’re talking about standardizing ruts on dirt roads.

The word routine, on the other hand, is often given a positive spin. Mike Murdock’s phrase, “The secret of your future is hidden in your daily routine,” makes a daily routine sound almost mystical.

It’s hard to find an illustration for routine, but this caricature of a woman with a clip board comes close if you imagine that every morning she sets out her task list before tackling the day.

ROUTINE CAN BE A POSITIVE FORCE

The positive reasons to have a routine are similar to the reasons we should practice time management and keep schedules. We establish a routine so we can plan ahead whether it be for five minutes, five days, or five years.

Routines establish good habits that can override bad ones, such as procrastination or rewarding yourself with a cookie after you eat fresh fruits and vegetables. If you make it routine to get up and wash the dishes instead of eating the cookie, you might forget about the cookie. I never do, but you might.

Routine activities don’t require thinking. My morning routine is to get up, drink coffee, read email and on-line newspapers, and give the cat his insulin injection. Experts say this sequence of habits saves me bags of time I might have spent thinking about what I need to do. 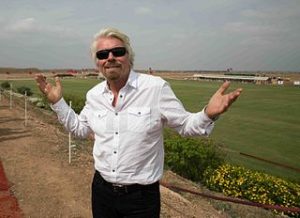 Routines start in the morning. Branson’s routine is simple. He starts his day at 5:00 a.m. With that time he exercises to clear his mind, enjoy the endorphins, and keep himself fit. Then spends time with his family and dog. This puts him in a good mood and grounds him for the day ahead.

Branson once said, “The spirit of adventure motivates us to set goals, push ourselves, thrive in the face of hardship, and achieve epic feats.”

Routines are essentially about setting goals and pushing ourselves to achieve them. Brianna Wiest, author of The Truth About Everything, observes that routine gives us purpose, the happiness of accomplishment, and a state of mental flow.

We can set as many goals as we like,

but without a routine to support them, they’ll remain out of reach.