I hadn’t seen one in years. People used to wear red poppy pins near Veterans’ Day and Memorial Day to commemorate the men and women in the military who died in American service. Last week as I was going into the grocery store, an older gentleman came up to me. He was holding out a small artificial poppy with a tag attached. “It’s free,” he assured me. I attached the “Buddy” Poppy to my purse. The veteran’s words have been in my head all week, the more so since Wednesday is Veterans’ Day.

At the time, World War I was the most horrific war in history. Never before had so many been killed so quickly for so little territory. Americans entered the war in 1918. President Wilson assured everyone that this would be the last war, the “War to End all Wars.”

In May 1915 Major John McCrae presided over the burial service for his friend Lt. Alexis Helmer who had been killed by a German artillery shell. McCrae wrote a poem about what it was like to be fighting in Flanders Fields.

In Flanders fields the poppies blow
Between the crosses, row on row,
That mark our place; and in the sky
The larks, still bravely singing, fly.

Scarce heard amid the guns below,
We are the Dead. Short days ago
We lived, felt dawn, saw sunset glow,
Loved and were loved, and now we lie
In Flanders fields.

Take up our quarrel with the foe:
To you from failing hands we throw
The torch; be yours to hold it high.
If ye break faith with us who die
We shall not sleep, though poppies grow
In Flanders fields.

Ironically, the disturbance of battle led directly to fields of poppy blossoms in the battle fields of Belgium, France, and Gallipoli. The struggle above ground released the poppy seeds which germinated and resulted in fields of red blossoms. 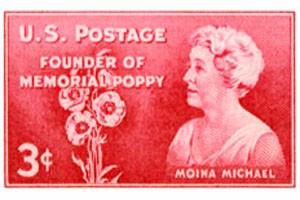 On November 9, 1918, two days before the Armistice to end the war became effective, Moina Belle Michael staffed a table at the Twenty-fifth Conference of Overseas YMCA War Secretaries. A passing soldier left a copy of the current Ladies Home Journal on Moina’s desk.

Moina flipped through the pages and stopped to read McCrae’s poem. The last verse impacted her with its plea. Moina vowed she would not forget, and wrote a poem in response:

Oh! You who sleep in Flanders Fields
Sleep sweet – to rise anew!
We caught the torch you threw
And holding high, we keep the faith
With all who died.

Moina left her desk to serach the shops. She returned with one large and twenty-four small artificial poppies. Conference delegates asked to wear them in commemoration.

After the conference, Moina devoted herself to the cause of the the Red Poppy as a national memorial symbol. In 1920, the American Legion adopted the flower.

A Century of War Ensued

As it turned out, World War I was not the last war, but the first of a new and increasingly brutal kind of warfare that destroys the men and women in its path.

• 5.2 million have served in the Gulf War and the War on Terror from 1990 to the present

And yet, humans and nations seem unable to maintain a state of peace. 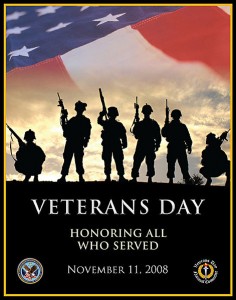 Veterans’ Day is a time to remember those who serve on our behalf.

The veteran handed me an artificial poppy.

The Story behind the Remembrance Poppy. Here.