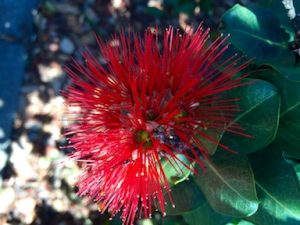 In the midst of an on-going eruption from Kīlauea Volcano, it’s hard to avoid thinking about Goddess Pele who makes her home in the volcano. There are many stories about Pele who is viewed both as a beautiful young woman and an old hag. She appears on roadways, hitches rides, and disappears. Pele is a goddess of strong emotions. She becomes jealous and angry when she doesn’t get her way. One of the most touching stories about the affect of Pele’s jealousy is the Legend of `Ōhi`a and Lehua, joined together for eternity. Here is one version of the story.

`Ōhi`a was a strong, handsome warrior; Lehua a beautiful young woman. Her face was round and glowed like the moon. Her eyes glittered like starlight. Lehua’s back was straight and her hair rippled like a waterfall.

One day Lehau saw `Ōhi`a speaking with her father and blushed. At the same time `Ōhi`a saw the maiden and was so overwhelmed he stopped speaking. Lehua’s father was amused, and offered to introduce `Ōhi`a to his daughter. From that moment, `Ōhi`a had eyes for no other woman and the young couple lived happily together until the day Goddess Pele saw `Ōhi`a in the forest.

Pele initiated a conversation, but though he was polite, `Ōhi`a didn’t respond to her advances. Pele was furious. About this time, Lehua arrived with the midday meal for her husband. `Ōhi`a stopped what he was doing to go to his wife. Pele, overcome with rage, transformed into a column of fire. She stamped her feet and the ground trembled. Lava made a ring of fire around the couple.

`Ōhi`a lifted Lehua above the lava. As the lava grew around his legs, `Ōhi`a held Lehua higher. `Ōhi`a’ s legs began to turn into wood; his arms became branches. Lehua’s hair billowed in the hot wind. Sparks made her hair look like red and gold blossoms. Lehua the woman became lehua the flower. It is said that if you pick the red lehua blossom it will rain, because of the tears Lehua shed for her beloved.

`Ōhi`a trees grow from sea level to 5,000 feet. The picture below is one I took last year of the tree with a steam vent in the background.`Ōhi`a is one of the first plants able to grow on barren lava rock, because the leaves can close their pores as protection from volcanic gasses. 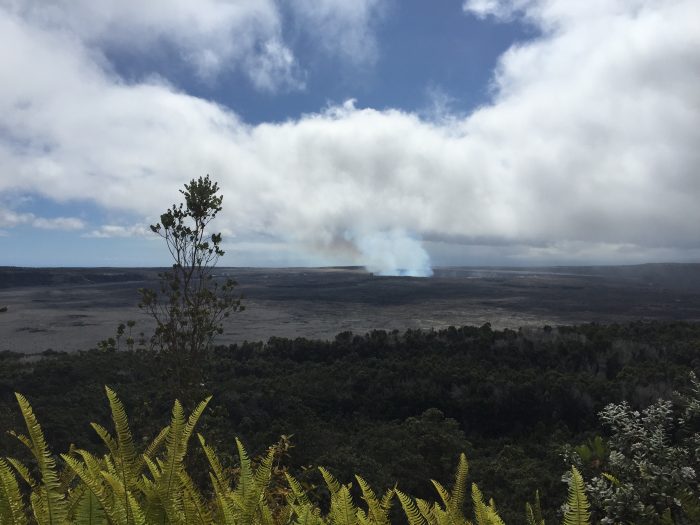 Hawaiians used the wood to make weapons and tools, for example the beaters to make kapa cloth from the bark of the paper mulberry tree (Wauke). 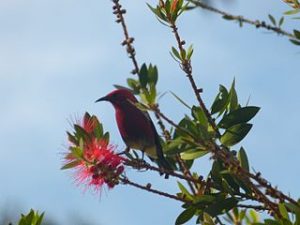 Native birds such as the `Apapane shown on the right feed on nectar from the lehua flowers.

The present Kīlauea eruption is destructive to people’s lives and properties. It’s also a time of renewal when new lava rock joins the earth. Perhaps that explains Goddess Pele’s two manifestations and her noted jealous temper.

Photos of lehua blossoms and steam vent by author.

“Ohia Lehua, and the Jealousy of Pele.” Love Big Island.