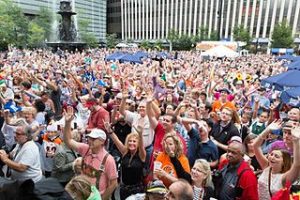 This is a picture of 30,000 participants following former Cincinnati Bengals quarterback Ken Anderson in the Chicken Dance at the 2015 Oktoberfest Zinzinnati.

The popular Chicken Dance has an unusual history, as many dances do.

Werner Thomas, a Swiss musician who played the accordion at Swiss holiday resorts, said he came up with the tune about 1955 as he watched skiers on their downhill runs. The athletes’ movements reminded him of ducks, so he composed Der Ententanz, aka Duck Dance, and performed it with a dance he devised.

A Belgian music producer heard Thomas play the tune at a resort in Davos, Switzerland. In 1973 he collaborated with a band called Bobby Setter’s Cash & Carry to publish it as a song called Tchip, Tchip. The words don’t sound like a duck quack, but they do have a bird-like quality. The song became known as the Birdie Song and within a year the single sold over a million copies in Europe.

If you want to, you can listen to it here. It lasts a little over two minutes, which is plenty of time.

De Electronica, a Dutch band, released a new cover of the music in 1980. They called the song De Vogeljesdans aka Dance Little Bird. The music video included choreography that would become the Chicken Dance.

BUT HOW DID THE CHICKEN DANCE COME TO AMERICA?

A band at an Oktoberfest in Tulsa, Oklahoma brought Dance Little Bird to the American public in 1981. Organizers wanted to teach people the Duck Dance, but couldn’t find a costume. They did, however, locate a chicken costume. And the Duck Dance became the Chicken Dance we know today.

History of the Chicken Dance and Oktoberfest. Old World.