“If you go down in the woods today, you’re sure of a big surprise

If you go down in the woods today, you’d better go in disguise

Because today’s the day the teddy bears have their picnic.”

Well, technically, the teddy bears had their picnic yesterday on Teddy Bear Picnic Day (July 10). And I would guess at least one teddy bear attends a little girl’s tea party every day. Teddy Bears keep secrets and never get grumpy, They’ve been part of children’s lives for so long, we forget how they came to be. Once upon a time, bear cubs weren’t considered proper playmates for children. Teddy Roosevelt changed all that. 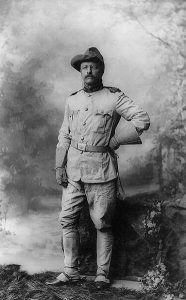 Theodore Roosevelt, known as “Teddy” or “TR” was president from 1901-1909. He was the picture of rugged masculinity, known for his wilderness adventures. Teddy saw himself as a hard-working president, and he had a particularly dicey problem.

The United Mine Workers of America went out on strike in the spring of 1902. Relations between labor and management were less than cordial, and government generally sided with management. TR threatened the miners with federal troops if they didn’t come to an agreement in time to prevent a coal shortage that winter. The two sides struck a deal in October.

The miners received a 10 per cent wage increase and shorter working hours – only nine instead of ten. Management received a higher price for coal and denied union recognition as a bargaining agent. The union proved it could improve working conditions; membership soared. TR proclaimed the agreement a victory for what he called a “Square Deal” benefitting both sides. 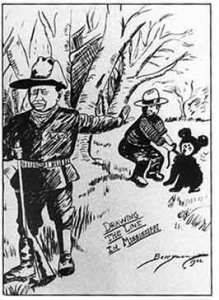 Back to the Bears

After all the tension, TR was ready for a vacation and accepted an invitation to hunt bears in the Mississippi swamps. It was a small expedition of trappers, horses, tents, supplies, 50 hunting dogs, journalists and Holt Collier, the guide and experienced bear hunter. The hunt was supposed to last 10 days, but failing to bag a bear during the first three days. TR became impatient, and possibly grumpy.

Collier and the dogs cornered an old, fat bear but wanted to save the kill for TR. Unfortunately the bear was holding his own against the dogs. Collier swung his rifle onto the bear’s head and tied the wounded animal to a nearby tree so TR could take the kill.

TR refused to participate in such unsportsmanlike behavior, but ordered the bear killed to put it out of his misery. Clifford Berryman of the Washington Post drew a cartoon which became an instant hit and enhanced the president’s reputation for fair play. 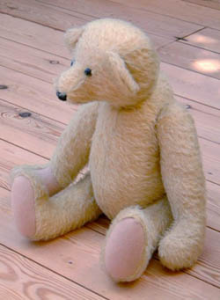 Rose and Morris Michtom had a candy store in Brooklyn. After hearing the news of TR and the bear, Rose made a bear out of plush velvet and put it in the store window with a sign: “Teddy’s Bear.” People wanted to buy the bear. The Michtoms requested TR’s permission to call the new toy a “Teddy Bear.” It was an instant hit.

Do You Know the Song?

John Walter Brattan wrote the Teddy Bear March in 1907. But it wasn’t until 1932 that Jimmy Kennedy wrote the lyrics familiar to so many children. The song became popular in the 1950s due to a television show called Teddy Bears’ Picnic sponsored by Pet Ice Cream. Anne Murray recorded the song in 1977.

With all the devastation and chaos in our world, it’s comforting to have a peanut butter and jelly sandwich with cuddly teddy bears.