This is Tamar’s story. It’s not a story you heard in Sunday School but it is in the Bible. Funny how only certain stories get picked out for retelling – especially if the story’s about a woman. Very few women even show up in the Bible as any feminist theologian will tell you.

The image on the left depicts Tamar and Judah, though the fashion is several hundred years after the story takes place.

When events begin, Judah, the clan patriarch, has three sons: Er, Onan, and Shelah. He arranges for the eldest to marry a girl called Tamar. Nothing unusual there. But Tamar doesn’t conceive. This is a problem when a woman’s duty is to bear sons for her husband’s family. There’s some disagreement about why Tamar didn’t have children. Some scholars suggest Er was practicing some sort of birth control – though they don’t give him a motive. Whatever he was doing, God thought it was evil and killed him.

Tamar is left widowed and childless, but there’s a loophole. According to levirate law, the brother of a deceased man must give the widow children. This gives the deceased a sort of immortality because it keeps his name alive. And it gives the widow a place in the family.

Judah tells Onan to do his duty. But Onan doesn’t want to. If he provides children for his dead brother, his inheritance will be less than if it is just divided with his younger brother. Tamar doesn’t get pregnant. God is angry, and kills Onan.

Judah seems to  think Tamar might be causing the deaths, and he isn’t going to give her a crack at his remaining son. He could release Tamar to remarry, but instead he says:

“Remain a widow in your father’s house until my son Shelah grows up.”

So Tamar returns to her father and waits, neither wife nor widow. She figures out Judah won’t keep his promise, so she devises a way to trick him. When Tamar learns Judah and his friends will attend a sheep shearing festival, she takes off her widow’s clothes and puts on a veil to prevent recognition. She goes to the city gate and waits. Anyone passing by would think her a public woman.

Judah has spent several hours at the festival when he sees Tamar. Judah wants the woman. Tamar springs her trap. 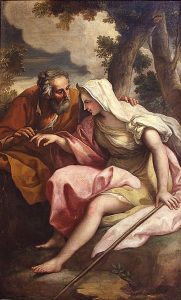 Deal. Later, Judah sent his friend to deliver the kid, but Tamar was no where to be found. Neither were Judah’s signet, cord and staff — the symbols of a man’s identity. 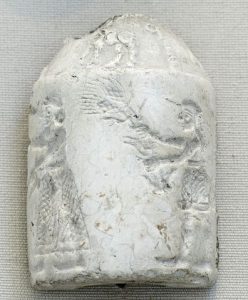 The seal may have been a cylinder seal like this one. The staff is specially made for the patriarch. It had a personal emblem at the top as a sign of authority, and his family lineage carved on the staff.

Judah probably wanted to retrieve his things, but no one knew who or where the woman was. Tamar was back home in her widow’s clothing. But there was something different about her.

Judah hears a rumor that Tamar is pregnant. As head of her clan, he orders her brought out and burned. He’s not being entirely fair. It was Judah who sent Tamar home to wait for Shelah, and then failed to deliver. It was Judah who blocked Tamar’s chance for another marriage. As men take Tamar to her execution, she’s undeterred and completes her plan.

Tamar sends Judah his signet, cord, and staff. “It was the owner of these who made me pregnant.”

Judah acknowledged his role in Tamar’s pregnancy. She gave birth to twin sons. There’s a nice symmetry here. The two boys give Tamar back her status as wife and mother; they also replace the sons Judah lost.

I think Tamar’s story posed a problem for biblical writers. They wouldn’t want to publicize Tamar’s successful bid to make Judah keep his word. On the other hand, Tamar was an ancestress of King David, proving his lineage passed through Judah. The writers had to include Tamar, just as Judah had to acknowledge her rights.

Tamar’s story is between episodes of the lengthy story of Joseph. Not hidden, but not in plain sight either.

Tamar’s story is in Genesis 38.

Images in the Public Domain from Wikimedia Commons

Judah and Tamar. School of Rembrandt.

Judah and Tamar by Niccolo Bambini.

Tamar & Judah.Women in the Bible.