We don’t hear much about the Baltic States, so I thought it might be useful to look at a map before visiting Tallinn, Estonia. The states on this map are Finland, The Russian Federation, Estonia, Latvia, and Lithuania. 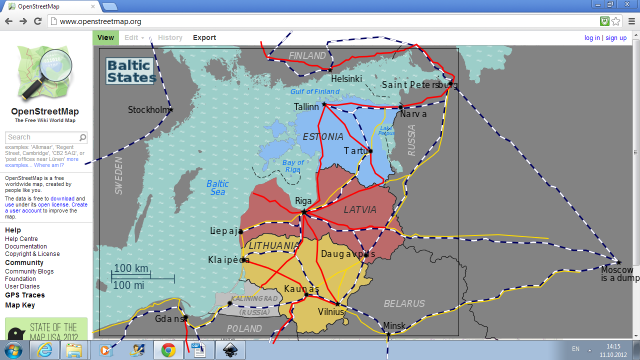 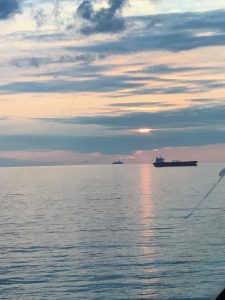 This week’s blog crosses over the Gulf of Finland from Helsinki to Tallinn, a distance of about fifty-five miles. Tallinn, the present capital of Estonia, has a long history, but we can begin in 1219 when Denmark controlled the area and Tallinn was known as Reval. In 1346 the Danes sold Ravel to the Teutonic Knights, beginning a German association. Roughly two hundred years later Reval became Swedish until 1710 when Peter the Great’s Imperial Russia defeated Sweden in the Great Northern War. After World War I, Estonia briefly emerged as an independent nation until Soviet Russia took over in 1940. The Soviets lost control during World War II. After the war, the Soviets reasserted control until August 1991 when Estonia successfully reasserted her independence. 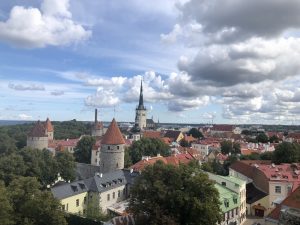 Today Tallinn’s Old Town is one of the best preserved medieval cities in Europe which is part of the reason UNESCO designated Old Town as a World Heritage Site in 1997. Old Town retains its city walls, cobbled streets, and majestic churches, but visitors beware. When cruise ships come to port, the streets are clogged and traffic is intense as residents rub “automotive shoulders” with packs of pedestrians. Word to the wise: If the street is wide enough for a car, stay on the sidewalk. 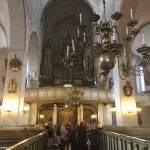 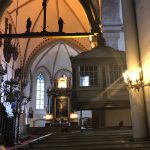 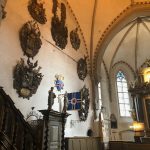 The Cathedral of St. Mary the Virgin is the oldest church in Old Town with records dating back to 1233. The Teutonic Knights converted Estonians to Christianity about the time the church was built. The church is filled with funerary coats-of-arms from the 17th through 20th centuries. Near but above the altar is what looks like a small house. This was built for government ministers, because it could be kept warm while parishioners in the box pews watched their own heat flowing upward.

There’s a stone slab inside the main entrance marking the grave of Otto Johann Thuve, a local landlord who spent much of his life drinking and carousing. He asked that when he died, his grave be placed at the entrance to the church where worshippers knelt to pray as they entered the church. Thuve hoped their prayers might cleanse his soul from his sins. 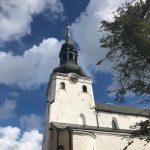 St. Olav’s Church at the Upper Town Square is thought to have been the tallest building in the world between 1549 and 1625. Its spire reaches just over 521 feet and can be seen all over town as well as out to sea. 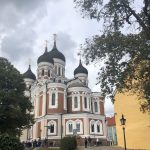 The Alexander Nevsky Cathedral built in 1900 has a different tale to tell. Named in honor of Alexander Nevsky who halted the Teutonic Knights’ push to the east, the cathedral stands on the site of a former monument to Martin Luther — a very public pronouncement that Imperial Russia was in charge. 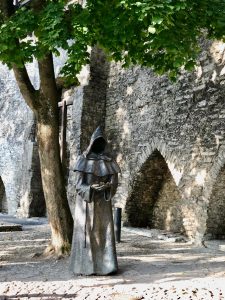 In 1311 the King of Denmark gave the area outside the city walls to what became known as Lower Town. The gate at Short Leg Tower was locked at night to keep the common people and ghosts from breaking into Upper Town. The area developed into the Danish King’s Garden. 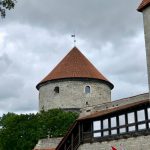 One of the towers, called Maiden Tower, was used as a prison for prostitutes. A story says that an ugly prostitute once made a deal with the devil. He would make her beautiful and she would give up her soul as well as enticing men into sin. She was eventually convicted of witchcraft and executed. 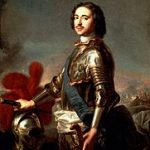 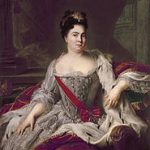 Kadriorg Park and Palace is few miles outside central Tallinn. The name is Estonian for Catherine’s Valley. Peter the Great acquired the property after the Great Northern War and commissioned a palace where he and bis wife Catherine would reside when he visited Tallinn. Construction began in 1718, but Peter died in 1725, and Catherine lost interest. 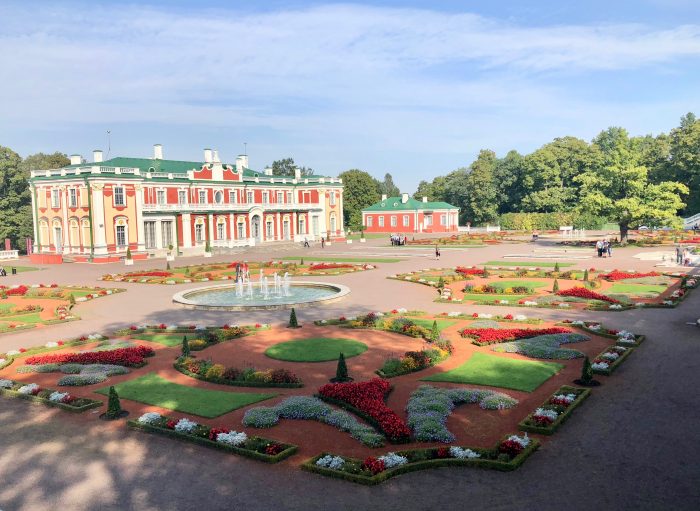 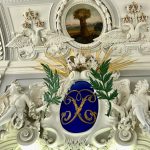 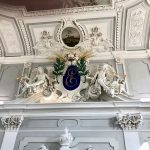 The main hall was designed by Nicola Michetti, a Roman architect, with an emphasis on royal dignity. Stucco decorations include the styled initials of Peter (PP) and Catherine (EI). The ceiling painting of Diana and Actaeon depicts Russia’s victory over Sweden with Actaeon representing the Swedish king, and Diana representing victorious Russia. 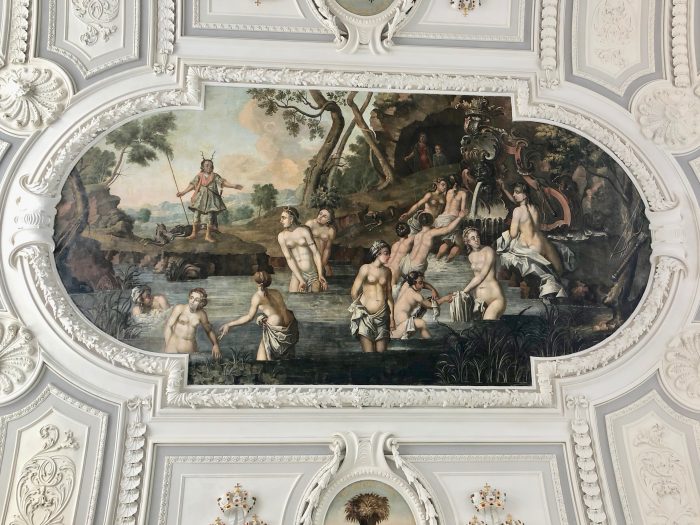 Map of the Baltic States in the Public Domain.

Peter the Great by Jean-Marc Nattier. US Public Domain.

Catherine I of Russia by Jean Marc Nattier. US Public Domain.

Other Photos by Author.