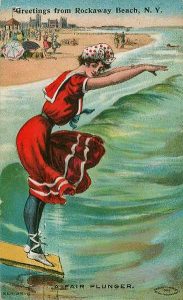 Summer will soon be upon us — the time of year when many of us will be seen in swim wear or, as it used to be called, bathing costumes. Summer wasn’t always synonymous with a seaside vacation. A convergence of factors in the mid-nineteenth century introduced the annual ritual to American life.

Railways made it possible for the average American to reach the sea, but that didn’t mean men and women could expose bare flesh. The swimming costume called a Princess Suit took its inspiration from

Amelia Bloomer and the Rational Clothing Movement. It was a low-hanging dress over pantaloons, called bloomers. The suits were made of heavy opaque flannel that had a tendency to rise when wet unless weights were sewn into the hems. 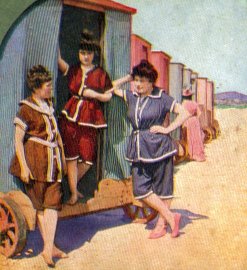 Princess Suits were only to be worn in the water, so women changed in Bathing Machines. There were two doors. On the shore, the bather entered the high-walled box and changed into the Princess Suit. There was a high shelf to keep the street clothes dry. The Bathing Machine was then wheeled into the water, usually by a horse and driver. The bather then exited through the seaside door and went down the steps to enter the water. Men and women had separate bathing areas, and the machine blocked any view from the shore. 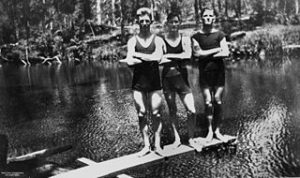 Men also kept themselves covered. It was illegal for men to go shirtless on the beach until the 1930s. 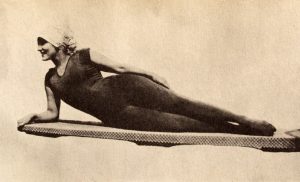 In 1907 swimmer Annette Kellerman created a sensation when she wore a form-fitting one piece suit as she demonstrated swimming and diving in a Boston Vaudeville show. The suit lacked a skirt which made it indecent. Kellerman allegedly told the judge she couldn’t swim wearing more fabric than a clothesline. The judge ruled she had to wear the skirt until she entered the water.

In 1913 Carl Jantzen created the first functional two-piece bathing suit that a woman could actually swim in. It was a loose fitting one piece with shorts at the bottom and short sleeves at the top.

In 1914 By the Beautiful Sea was a popular hit. This three minute rendition of the song by Harold Atteridge and Harry Carroll features photos from the age.

Swim suit styles changed in the 1930s. Men no longer wore tops. Women had a plunging neckline at the back, and the sides could be cut away. The use of latex and nylon allowed suits to hug the body more closely. Tanning also became a popular pastime. 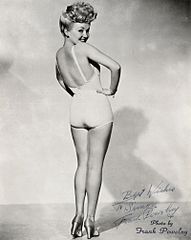 During the 1940s war time production rules required a ten percent reduction in the fabric used in women’s swimwear. Two-piece suits with a bare midriff began to appear, though they were not immediately popular. Betty Grable’s famous 1943 pin-up picture demonstrates the look most women were after. 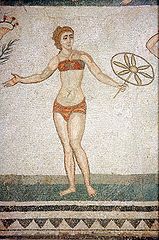 In 1946 designer Louis Reard unveiled the first bikini. Named after Bikini Atoll, a nuclear testing site, the suit was said to inspire a visual explosion. Unable to find a “respectable” model, the job went to Micheline Bernardini, a nude dancer from the Casino de Paris. One could argue his design wasn’t entirely original, as seen in this mosaic. 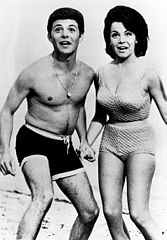 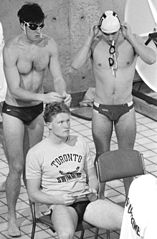 Men’s swimwear underwent similar changes from full coverage in the early twentieth century, to bare chests and rayon shorts in the 1930s to Frankie Avalon’s fashion statement in a 1960s Beach Blanket movie. Speedos were popular in the 1980s, and then the trend shifted back to Board Shorts, sometimes called Surf Trunks. 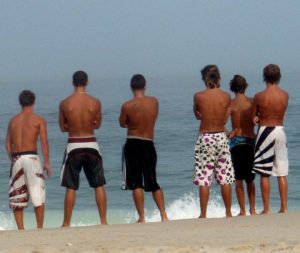 Nowadays the range of swimwear goes from almost non-existent to full coverage and nothing seems shocking.

Three Men on a Diving Board. Public Domain.

3 thoughts on “SWIMWEAR BY THE SEA”