Tuesdays are getting noticed this year. Last week Tuesday was Flag Day. This week, June 21st marks Summer Solstice in the northern hemisphere. As this diagram illustrates, Solstice is the moment when the sun reaches its most northerly point on the celestial sphere. In other words, it’s the longest day of the year. The next day begins the shortening of light. It’s odd to realize that the height of summer also marks the beginning of darkening days. So let’s not dwell on it. 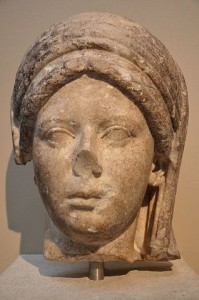 There are all sorts of celebrations to mark Summer Solstice. The Ancient Romans, for example, used the occasion for a festival honoring the Goddess Vesta, protector of the hearth. On the first day of the festival married women could enter the temple of the Vestal Virgins to make offerings to the goddess. Ummm….wow.

Modern celebrations in Scandinavia include bonfires and decorating homes with flower garlands and greenery. I suspect libations are served. 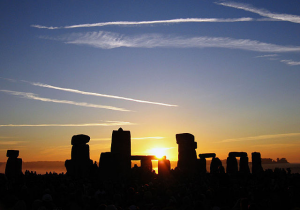 The most famous festival marking Summer Solstice is the one at Stonehenge, a ring of standing stones in Wiltshire, England. If you stand at the correct spot and face northeast towards a stone outside the circle called the Heel Stone, you will see the sun rise. I won’t because I’m not up that early.

After generations of tourists and contemporary Druids, English Heritage decided to prevent further deterioration of the stones and closed access in 1977. But this doesn’t prevent Druids and other celebrants from keeping the day in good spirits. In 2015, 23,000 people gathered at Stonehenge to see the sun rise at 4:52 a.m.

This year English Heritage will close the venue at 3:00 Monday afternoon and won’t reopen until Wednesday morning. While Stonehenge is closed there’ll be managed open access. Parking will cost £15 per car which works out to about $21.50. Visitors are advised to bring sensible shoes and warm clothing. No alcohol, no pets, no naked flames, no drugs, and no drones. They also advise against sleeping on the ground and suggest you do that in your vehicle. Wonder how that works out for enforcement. 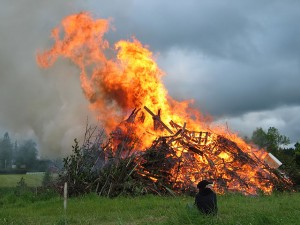 You don’t have to go to Stonehenge to celebrate Solstice. Midsummer bonfires can be lit anywhere. Parties can happen right in your own backyard. Invite your friends, decorate with greenery and twinkling lights, serve beverages and tiny canapés. Or take the easy way out and have a barbecue theme. The main thing is to have fun and toast the longest day of 2016.